Examining these texts, it’s clear that reading isn’t only about reading words. We read the page, the book, the paper, the ink, the binding, the cover, the type and the relationships between them. We read the history of publishing. We read what it is to read a book. (And what it is to read the digital representation of the material, tactile object. The digital for the digits' reading fingertips.) What is the role of the visual presentation? How do we read this entire ‘text’, a text which encompasses more than just the verbal?

The textured/woven backgrounds seem to allude to printing from decades ago—the retro colors, textures, shapes, and design—and not the printed pages of a book, but rather the covers. I think there were books like these in my in-laws' wood-paneled basement rec room, behind the taupe "The World's Best Dad" statuette, the complete Nancy Drew collection, and the set of Reader's Digest Condensed Books. I have a vague memory of these kind of word lists from grade school, or from old readers found in the garage.

How does one read a text that is somehow inside out (some kind of ‘cover’ of a missing original) especially when the verbal elements appear to belong to the inside?  How to understand these words that seem to belong to another part of another book?

The words of the texts form poems in their own right, but they seem to be the result of  some kind of selection process. The texts are lists (the gathered data of the 'study') as well as poems. And they have been organized with an ear and a mind to both sound and semantic relationships. Has some erasure happened here? There are empty lines quoted, placeholders in the form, or perhaps entries which have been deleted.  Are the numbers line numbers or page numbers? Do they say something about where the words have been gathered? And how are we to ‘read’ these verbal elements in the context of the visual? 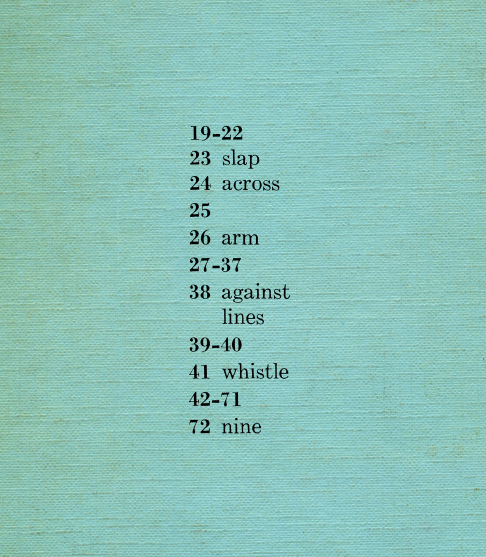 I'm interested in working with words that have already been employed. And with this in mind I'm always on the look-out for found text. This situation of the text, its context, is always significant to me. I had noticed and been intrigued for a long time with the lists of words at the back of children's readers. The numbers would indicate where the word could be found in the story and sometimes a star might emphasize the importance of word for further study. In a manner similar to my earlier project with indices these lists of words to 'study' both reflect the stories in the books and taken out of their usual roles can take on a life of their own. At times as I initially viewed them and began collecting them they seemed to be calling out with their own stories and rhymes hinting at a more subversive life, not between the lines (of the original story) but within them. By isolating these lists and presenting them out of context I can let this 'other' poem/story emerge. The backgrounds come from selected details on the covers of many different hard cover readers. They are cloth bound painted and shellacked and my reproduction of them highlights their beat up textures and vivid colors. There's a juxtaposition between the bright happy world of this imagery and the absurd dark indications in the poems.

The first poem [see above] provides its own rhymes and rhythm. The numbers are a critical component. The second poem hints at darker events: 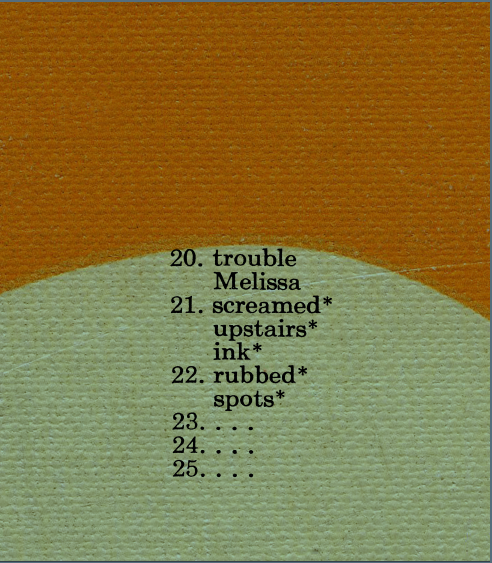 The complete Study can be found online.

Erica Baum lives and works in New York. She has had solo exhibitions at Bureau, New York; Lüttgenmeijer, Berlin; and Circuit, Lausanne. Past group exhibitions include "Subject, Index," at Malmö Konstmuseum, Sweden. Her work will be included in the upcoming group exhibition "Postscript: Writing after Conceptual Art," at the Museum of Contemporary Art Denver, and the 2012 São Paulo Bienal. Her work was included in the book Vitamin Ph: New Perspectives in Photography, edited by T. J. Demos (Phaidon Press, 2006). Her artist's books include Dog Ear (Ugly Duckling Presse, 2011), with essays by Kenneth Goldsmith and Beatrice Gross, Sightings (onestar press, 2011), and Bbabaubaumbaudevin (Regency Arts Press, 2012).