1.  "All human cultures are creole," John M. Bennett writes. Our language and our world view are hybrid, influenced by and adapting influences from the global village and our post-global home. They are inevitably syncretic and creole.

Absolutely. But Bennett’s use of the term ‘creole’ brings to mind the other meaning of creole. Creole as in the ‘creolisation’ of languages. How the language of a colonizing or dominant culture devolves into a pidgin and then develops into a creole, a rich communication tool with its own grammar, form and traditions, though often with a vocabulary based on the dominant language. So: Haitian Creole and its relationship to French.

So: what if visual poetry is a creole language, one that has created its own grammar, forms, and literature based on the ‘colonizing’ verbal and visual language of the dominant mode of communication/language/culture?

2. Everything is a Face

The vispo is pareidolic. (Isn’t everything? That potato looks like my mother. And my mother looks like Mother Teresa. Or the moon.)

The image ('Discipline,' above) appears as some kind of creature (human, monster, jellyfish) with eye-like figures at the top of its ‘face’ (though the left ‘eye’ is also mouth-like.) The image is both face and body. The red y is limb-like. Or tongue-like.  An ear? Something penetrating or escaping? Whatever it is, it seems to move toward the top of page and seems organic and full of agency. Those e’s falling from its right ‘eye’. Or flying up into it. But maybe the image is a gate. A doorway. A hat. An abstract field of markings. Engaging with the idea that we can’t help but ‘read’ into marks, into inscriptions. The piece has a powerful emotive quality. Trembling with the energy of the psyche. Vibrating with visual energy.

So: protowriting. And thus the protoreader. What would post-writing look like? The post-readerly text? Or the post-reader? (The moon, Mother Teresa, my mom?) 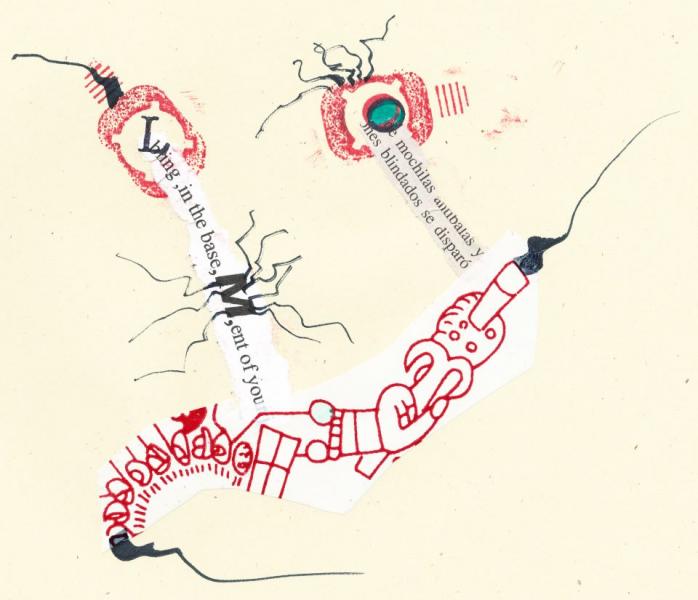 Ripped paper, rimpled text on torn paper. Bennett’s signature curly ink scrawlings, rubber-stamped letters which often call attention to the fact that they are glyphs pressed from ink. The physicality and gesturality of making marks. The materiel of language which comes together as constellations on the flat screen of the page. Often Bennett’s work explores different textures and different modalities (registers/of text, of mark-making, of drawing). It often involves collaboration with others. A kind of multilevel polyphony or heterophony (polyglyphony? heteroglyphony?) There’s an implied sense of community, of working together, of ‘jamming,’ exploring, of taking this thing on the road and seeing what happens. And the actual images: there is an engagement with the visceral, with the gargoylesque, the “ugly,” primitive, or grotesque.  The childlike.

GB: How do you conceive of ‘reading’ in the context of your work? How do you imagine a reader approaching it? What would happen in their readerly head? What strategies would you hope or expect that they might use? Would they analyze or drool? Would they seek an overall sensory impression, or parse the visual in some way, weighing the resonance, associations, or possible associative or denotations of the images?

JMB: To respond to your questions en bloc: my "visual" poetry is on a continuum of all my work, and what people see as visual or not varies with the person. I myself don't bother trying to define where it's visual and where not; such an exercise is useless to me. In fact, ALL of my work is visual and textual and oral and performative, all at the same time.

With regard to the piece you selected, your comments on it seem to make sense; as with all my work, everyone reacts to it or sees it quite differently.

I think my art - maybe all art - is a mirror, in which the viewer/reader seems herhimself. I always hesitate to say what I see in one of my pieces, because then people assume that's "definitive," which it isn't at all. I'm really no different from anyone else, or at least in any meaningful way. My reading of a piece is just another reading, and it will be different each time I read it.

The piece ("Discipline") was part of a series made in response to an extensive encounter with Mayan writing, and with Mixtec picture writing. In a sense the whole thing is a glyph, and a kind of picture writing which is NOT what most "visual poetry" is. It's meaningfulness, or one of its meaningfulnesses, lies in the hybridization of Mesoamerican culture with my own complex culture. It's a way of saying the world or my experience of the world in a creole visual language. How someone else responds to, and deals with, this work is not my problem; as I said, everyone will find (or not) a way with it or in it. And that's how it should be. I cannot tell anyone else how I want them to approach my work.

GB: Could you say more about how you view the 'creolization' of the visual, of the written, of multi-media language, about how we must negotiate this creolization/hybridization of multiple inputs, traditions both through time and space?

JMB: Creole [as I use the term, denotes] a mix of sources, yes.  With regard to language that can involve the retooling of everything; not just grammar, but lexicon, metaphors, images, puns, particular expressions, pronunciation, and so on. As I said, I don't think there's such a thing as a "pure" language: all are creole, ultimately.

With regard to multi-media literature, I'm inclined to think that the above is the case as well.  That is, people are referring to what seem to be new wrinkles or emphases in something that has always been there. From the very beginning of writing, there have been visual elements, for example. Glyphic and picture-writing processes are being used by some today, myself included, but those are not new processes. Very old ones, in fact.  Perhaps there is a new explicitness in how they are being used today in some new writing; perhaps a new and greater frequency of use than in the recent past. Perhaps also they are being used in what might seem at first more jarring and intimate relationships with semantic and alphabetic writing. But they've always been there.

John M. Bennett has published, exhibited and performed his word art worldwide in thousands of publications and venues. He was editor and publisher of LOST AND FOUND TIMES (1975-2005), and is Curator of the Avant Writing Collection at The Ohio State University Libraries. Richard Kostelanetz has called him “the seminal American poet of my generation”. His work, publications, and papers are collected in several major institutions, including Washington University (St. Louis), SUNY Buffalo, The Ohio State University, The Museum of Modern Art, and other major libraries. His PhD (UCLA 1970) is in Latin American Literature. His website is a treasure trove of his many works and projects.