Sound and textiles, sound and writing

The sound of textile-making draws the maker in. When it is handwork — the click of knitting needles, the pull on a skein of yarn, the swoosh of the shuttle across — the sounds of textiles extend the body of the maker out into space, making a wider territory. When the machines of textiles are sounded, this is another soundscape altogether, invoking, to some, profit and progress. To others, this textile machine soundscape is distress, underpayment, monotony, even danger.

In this commentary I want to urge us to conceptualize the senses as interbraided. And if we do, then maybe one of the reasons we write is in order to sound but the sound I am referring to does not have to do with language’s sign, an utterance, or our poetic voice.

Writing has a sound. The fleshy side of a hand over paper, a pen slightly carving into paper, a pencil scratching, or the click of a keyboard surface—a laptop, the keyboard at the job site, the small computerized click of a each keystroke on a touch-screen surface. If the writer at the keyboard has nails of some length, this is a different sound—something extra clicky—very feminine, excessive. Nails that extend the body in order to decorate would seem to inhibit labor. And so she reasserts her leisure, her femininity at the keyboard at work by growing her nails too long for their idea of the efficient worker body.

The home sewing machine occupies a space between the work of the hand and the factory. Unmistakable in its sound of starting and stopping, it generates the revving hum of “personal productivity”—and these associations may be variable, a space of pleasure or not: the work may be for a hobby, for a personalized item of clothing. Or because a worker is doing “home work” for a corporation—someone drops off the bags of pieces and comes a week later to pick up the finished product—or the sewer is running a business out of their home, making the dress or suit that comes with the expectation of a perfect fit.

I think that the sounds of a personal computer—activated for the poet’s meander, the wander of surfing the web, and/or the productivity of “word processing”—is an ambiguous keynote in an indoor soundscape akin to the sound of the personal sewing machine.

The sound of textile work and an overt connection to music as organized sound is exploited in a recent performance of visual artist Elena Berriolo—who “plays” the sewing machine, making marks, as a violinist and pianist plays with her. Here the interbraiding of the senses is totally obvious: sound and sight, even touch and haptics—Elena’s foot on the pedal “plays” the sewing machine—are invoked.

Yesterday, Jonny Farrow, an artist who works with “sound as a poetics,” lead my advanced poetry workshop students on a sound walk in Abu Dhabi. Drawing on the work of R. Murray Schafer, Jonny talked to us about ways to hear the soundscape’s lexicon and range. We began our walk on the city’s corniche, listening to traffic behind us, the lapping water of the gulf in front of us. As we moved in closer to the water, without prompting, students wrote, and tuned in to sound, we each became enveloped in our own territory—the space of our notebooks—as we simultaneously tuned in to the shared soundscape. 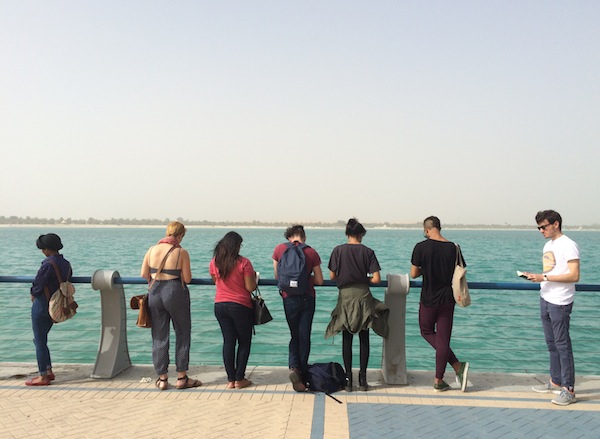 Our sound walk ended on a grassy patch near two mosques that are sandwiched between two rows of skyscrapers—under construction on one side of us, and being demolished on the other side. I noticed the similarities in the sounds of building and tearing down. The early evening call to prayer—Abu Dhabi’s keynote sound, as Schafer would call it—was the culmination of our walk. After, while debriefing, Roshni said she had “unlearned” Abu Dhabi. I asked her to elaborate. She said she thought she knew the city—she’s a senior—but listening, she found something else.

Yesterday I became very aware of the relationship between sound and movement. Of course this is not a new discovery in the world—but my new awareness got me thinking of textiles and movement and sound and writing. Perhaps I was unlearning something about writing through these associations. Making sound from instruments often involves agitating pulled string or moving air through some kind of pipe to create orchestrated resistances. Are the tools of writing like musical instruments? The tools of textiles, also?

I am thinking of the sound of embroidery. I have written about this before: the puncture of the surface, followed by the pull of the thread through—it is all very audible and the sounds repeat again and again with each stitch—like breathing. The pulling sound becomes shorter and shorter as the embroiderer’s work continues and the needle has to be re-threaded. Some of the energy I find in stitching, I am sure, has to do with the sounds that I swim in as I work. The sound of something new emerging. I have been urging my students to tune in to this possibility in art-making: that as we make the thing, it moves outside of ourselves and through that distance, it gives us new information. Certainly instruments are like this. We adjust in order to play them well. Not just any sounding will do. So it is with writing.

Yesterday, silently, Keriana signaled for us to look up at a skyscraper where the sun’s rays were reflecting off its surfaces like a starburst—illuminating a sky that was blue mixed with the milkiness of a dust storm. She later said that if she hadn’t been trying to hear those buildings she would have never seen the light in that way.

A poem might transcribe this experience where sense upon sense is activated. However, I am most interested in a poetics of the notebook as territory where “the senses” are not divided into distinct textures, but where textures are brought into awareness in order to sound the text that is to come.