Some waves originate deep in space; others arrive with the wind, cresting the ocean's surface. At low tide, a traveler might walk a long stretch of shore, shifting boundary between land and sea. She might lift spiraled shell to ear, listen for a sound that began in a neighboring galaxy, named after an explorer intent on sailing the globe.

in the salt chuckle of rocks

with their sea pools, there was the sound

Such does Derek Walcott locate history's source in a tidepool made of words. Writing in Poetic Intention, Édouard Glissant uses the same materials of construction: "I build my language out of rocks, I write, indeed, with the feeling of some scribe. . . ."

In the tides between history and language: poetry, an island that breaks away from the main.

When islands cluster in close proximity, they become an archipelago. The word is thought to have sprung from an Italian construction for the Aegean Sea, archi + pélago, meaning chief sea. Now understood to be "any sea studded with islands," archipelagos can arise through geologic displacement or volcanic activity. The archipelago where Walcott and Glissant were born two years apart is a volcanic island arc known as the Lesser Antilles. To a seventeenth century mapmaker, it looked like this: 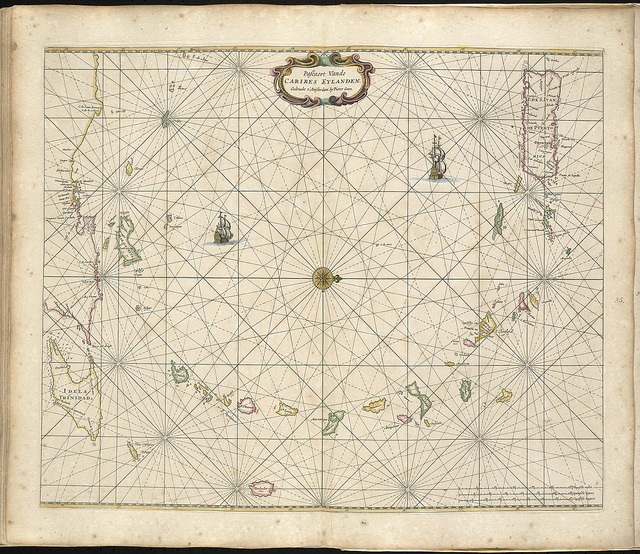 From space, it might look like a blue expanse studded with green forms, whitecap ripple of waves: 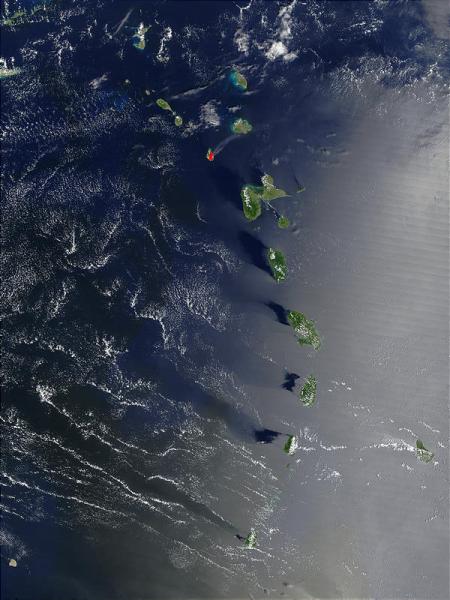 From beneath the ocean floor, it might look like tectonic plates, colliding along a region geologists call a convergent boundary: 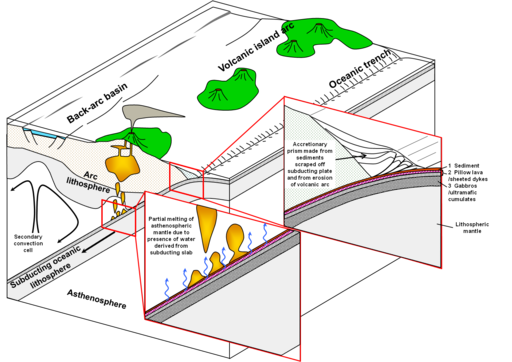 Vision in relation to point of view.

On another map, one might observe a new cartography hewn from a relation between print and pen. The title, in Garamond: UNE NOUVELLE RÉGION DU MONDE. The inscription, translated: Under the rock of the Diamond, the wave of the All-World. With friendship, Édouard Glissant. 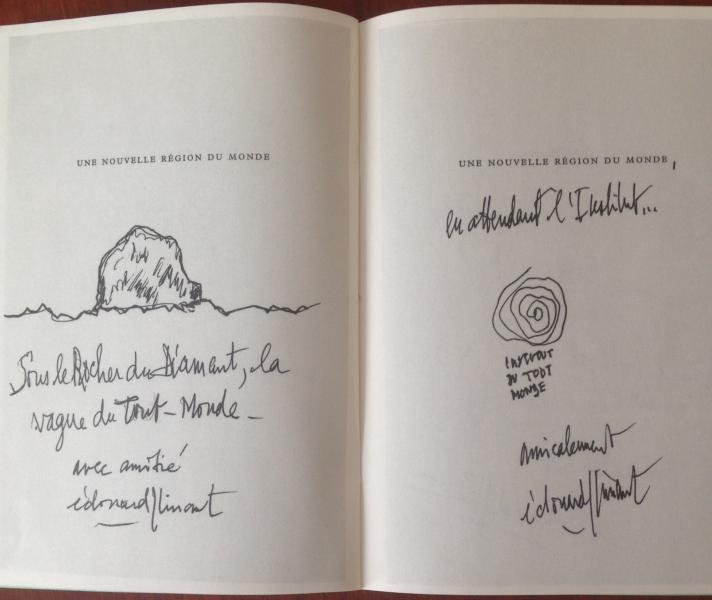 The handwriting on the right is harder to interpret, though en attendant is clear. The phrase might be translated as meanwhile or awaiting, but as with attending, an enduring patience inhabits the spiraling center, the good-will signature of its maker. Such might an individual hand translate type-set page into evolving transcript, revise the already-written to that which might yet come into being.

To change your language you must change your life, charges Walcott in a poem named after a document that modifies an existing contract.

How long will a new region of the world have to wait?

Last year, not far from another constellation of archipelagos, 170,000 persons had little choice but to change their lives by crossing the sea. As many as 3,500 died while making the journey. It continues still, violent waves of dislocation.

Under the rock of the Diamond, the wave of the All-World. The formation of natural diamonds require very specific conditions of temperature and pressure. These conditions occur at two places on Earth: deep in its mantle and at the site of a meteorite strike.

Glissant's Tout-Monde is a visionary world, built of language tremors. Of its particular quality of movement, he has said,

The All-World trembles physically, geologically, mentally, spiritually, because the All-World is looking for the point — not the station, but the utopian point where all the world's cultures, all the world's imaginations can meet and share one another without dispersing or losing themselves.

How might such a point appear on the legend of a map? Where would its symbol be placed?

The scientists who recently detected gravitational waves traced their source to a region near two galaxies known as the Magellanic Clouds. You can see them here, on a sky map of the southern hemisphere: 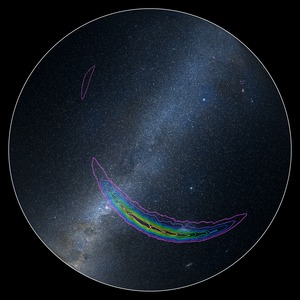 As for waves in the ocean, the wind most often brings them, but another source is massive displacement of water, from an earthquake, say, or a landslide. Tectonic movement converging to chart a new course. Sometimes a chain of islands, sometimes their destruction, a revision of topographic contours.

The current of hot gas and rock that rushes from a volcanic eruption is called a pyroclastic flow. Its speed can reach 450 miles per hour; its heat can rise to 1,830°F. It's the kind of explosive event that brings diamonds to the Earth's surface, where we might find them. Almost unimaginable.

Except this record of history reports: "On 8th May 1902, Mt. Pelée, erupted on the island of Martinique. A glowing avalanche from the eruption destroyed the town of St. Pierre and its 28,000 inhabitants. Only one person, a prisoner, survived."

Failed crossings, closed borders. Waves trembling across infinite distance. Inside the arc of parentheses, the glint of a new geography smolders:

History must be assumed completely (lived together) in order perhaps to move beyond it (like the sea) once more.

At night we have heard

The forest, an ocean of leaves, drowning her children,

Still, we belong here. There’s Venus. We are not yet lost.

The surf tires of its castles like a child.

Waves tire of horizon and return.

The inset verses by Derek Walcott are from his poems "Lampfall," "The Castaway," and "Codicil." Sea-almond is from Walcott’s "The Almond Trees."

A St. Lucian man told me ki mwen non means what is your name, and though I may have misunderstood him, I thought it interesting that phonetically this expression resembles the French qui mon nom, which would suggest who [is] my name.

Madeleine Campbell is a freelance writer, researcher and translator. Born in Canada, she lived in France for over a decade before settling in Scotland. Her translations of Maghrebi poets have been published in the University of California Book of North African Literature, Scottish Poetry in Translation, and MPT Magazine with a forthcoming short story in Unsettling Wonder. Her writing has appeared in Lighthouse, Poetas que traducen poesìa, The Burns Windows Project  and Stanza’s Poetry Map of Scotland. She co-edited the Quaich anthologyand is a member of the Cultural Literacy in Europe forum.