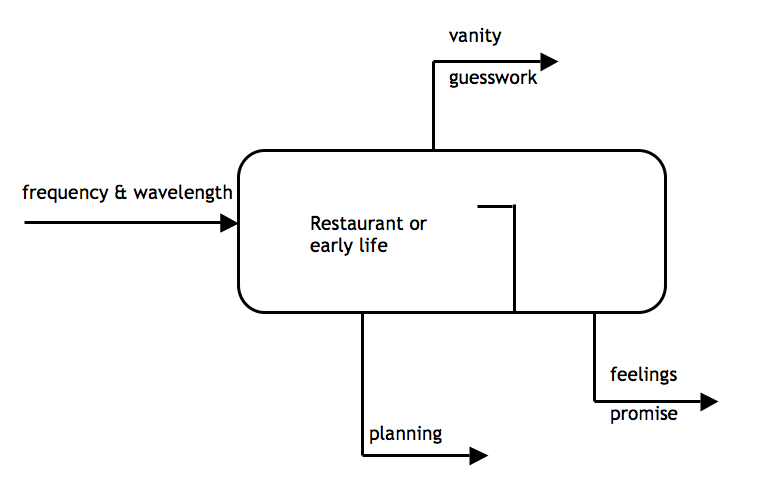 Relativity is born from the difference between the two 10s

The unknown bird doesn’t call from its wooden cage
Between the concepts a balcony ran endlessly
Planning does not have to contradict promise
Manners play, of certain fruits and pets
Its natural that many possibilities would
Keep a safe mathematical distance from their outcomes
Protracting light n’ shade cover my early life
And with calculated risk can see my vanity
Is made temporary by the unit of conventional time — a tool of evolution

That the northern and southern limits of nostalgia are gradually fading
As differentiation embeds itself into some research subject
Of volatility, vanity, feelings and promise
Waiting for the Arabian night to get over
As frequency and wavelength maintain a kind of relativism
In their continuing symbiosis[1]

As he told me, “You don’t have to have too many elements in a film, but whatever you do, must be all right elements, the expressive ones.” Simple-sounding advice, which nevertheless touched upon one of the fundamental principles of art — economy of expression.

Many would keep their words now
It’s relatively easier with all negation withdrawn
Time’s unit, too, could lead to a limitless search
as we familiarize in private
A relentless retiree might spend all his rest looking up a word

who are then, the immoderate influential
servility of clannish beings, a derogatory address

I don’t like the mild light, the natter
Take off the artificial completely
Let the tattoo on your back touch the neon flame
That body is rhetorical and clockless
looking for its own history

Thank you for your letter. Because of the large volume of mail I receive, I am unable to write personal responses. Nevertheless, know that I read and save every letter, with the hope of one day being able to give each the proper response it deserves.

There is no “heart” anywhere in my carefully saved letters
“Mind” is a different thing, as we know
I nurture the idea of the birth
of an expectant subconscious
In reality there cannot be a proper personal response to any question —
But a question represents its inquirer

Letters written on colored paper come in white
envelopes and vice versa
My conscious letters have a single recipient, a thousand subscribers
privately construing a distinctly different tale
in every word-pair
while others look for amazement
to light up their solitary wordly lives

While listening to the church organ

Not sure if I’m perplexed or pleasantly illusioned
when I listen to the church organ
— But you are an atheist!
Perhaps, Sunday morning’s confession
sex sins of someone knelt down before polished mahogany
makes me tired at times — I believe in gradual modulation
— What about those birthdays then?
Why no one puts out the candles now!
Shadowy hatred in real deep
deep in D-sharp
— Do you feel any presence in the margins, in the nodes?
I see helixes in their lips, enchanted strings
and their complex mathematical shenanigans
— Can she comprehend you?
Of course, I eat ice cream on the beach
— Does that mean you like the sea, openness?
Blue is the color, whose wavelength defines my atheism
Vibration is often a confession from which
many gods and church singers are born
So we all love the gradual modulation

And some love blue.

Translated by the poet and Aryanil Mukherjee.

1. Translation notes: Damodar: Indian river. Mahua: both the white flower and white wine made from it.

Circumcontentive poetry
The circumcontent of science and poetry
'Woodense': A close twinning
Poems by Sukanta Ghosh