One of the central unified field theories of quantum gravity is string theory or superstring theory, where spacetime is conceived of as an ambiguous ecology. In string theory, the known universe is thought to be part of a larger wilderness of universes, the multiverse, which is comprised of multiple and perhaps infinite dimensions of space and time that are created by collisions between subatomic, vibrating membranes of energy known as open and closed strings. The theory defines the evolution of space and matter from the connections between these vibrating membranes of energy. String theorists aim to reconcile quantum mechanics and relativity into a single description of physical reality that is often referred to in contemporary physics as a Theory of Everything.

Upon reading Christine Wertheim’s mUtter-bAbel (Counterpath Books, 2014), where Wertheim tells the “story of language and some bodies of the word made flesh in a child’s imagination” through visual poems often highlighting the letter “o” and that sonically treat words as “vocal organs,” I thought about the open and closed strings in string theory and wondered if the author was—consciously or without intent—responding to the colliding, subatomic, vibrating membranes of energy that string theorists think create the multiple dimensions of the multiverse. The author and her book, after all, are a part of the ecology of the multiverse, so it makes sense that they might be responding to their environment; eco-poetics, in the context of the multiverse, includes everything, and what we mean by nature is just a matter of scale. In mUtter-bAbel, the letter “o” is positioned as a visual and semantic analysis of breaths, openings, orgasms, nothings, somethings, tongues, noises, mothers, words, modernity, holes, howls, mouths, and more. 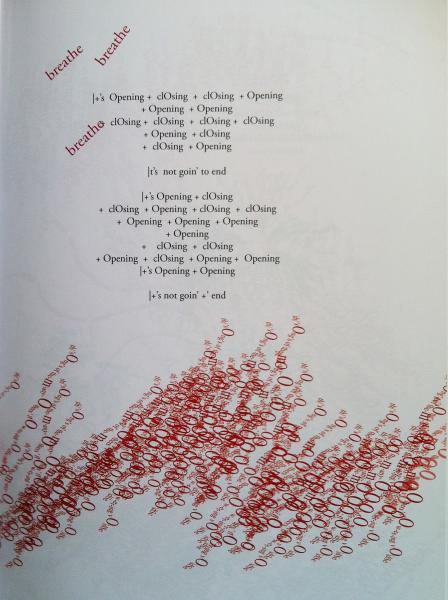 An image I took of a page from Christine Wertheim’s mUtter-bAbel.

The overtly political sections of mUtter-bAbel address the human movement across the U.S.-Mexican border through visual and semantic depictions of outrage for conditions endured by the poor in Mexico. I am reminded of the way that universes in string theory are bordered by branes, the points upon which open and closed strings are situated. Or is that brain? Does the multiverse express homophones of the body and the body politic simultaneously?

Poetry can bring the attention of its readers and writers to multidimensionality in not only ethical but physical reality, and it is through the latter that I consider derek beaulieu’s visual poem, “Flatland: A Romance of Many Dimensions,” anthologized in Against Expression (eds. Craig Dworkin and Kenneth Goldsmith, Northwestern University Press, 2011) and presented in his selected poems, Please, No More Poetry: The Poetry of derek beaulieu (Wilifred Laurier University Press, 2013). “Flatland: A Romance of Many Dimensions” procedurally uses Edwin Abbott Abbott’s novel of the same name, where characters are geometric shapes in a two-dimensional world, to make a visual poem that enacts the vast variability of spacetime. 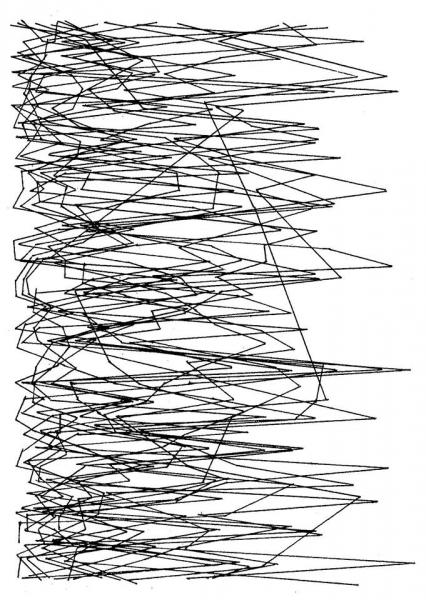 In Against Expression, beaulieu explains his process:

If one thinks of the page as a two-dimensional representation of the universe and a poem on a page as a three-dimensional representation of the multiverse, beaulieu’s “Flatland: A Romance of Many Dimensions,” with its process taken into account, is a geographical representation of hyperdimensions. The poem demonstrates how poetry can exist as a quantum superposition of distinct versions of spacetime from the two to four dimensional world of Abbott’s novel to the physically reduced but theoretically expanded dimensions of beaulieu’s visual and statistical translation, creating a post-fourth dimension forged by poetic procedure. The editors of Against Expression touch on this:

By peeling back the letterist layer of the page, Beaulieu reveals another dimension of the life of a text, mirroring Abbot[t]’s wish to make visible the fourth dimension in his own work.

From the vantage of quantum poetics, poems like beaulieu’s suggest to me that we are not in a post or double-post postmodernism but something else entirely where chronological markers such as post and pre, like history and linear time itself, have no meaning. In a multiverse of multiple and perhaps infinite dimensions of spacetime—where in some dimensions literature, language, and humans exist—the very notion of linearity, which relies on the outdated idea that time moves like an arrow through a past, present, and future, is as one dimensional as one of the drawn lines in beaulieu’s multidimensional poem.

Aspects of string theory are being tested by contemporary physicists in high-energy particle accelerators such as the Large Hadron Collider at CERN in Switzerland, built in an underground tunnel spanning 17 miles. Jennifer K. Dick’s book-in-progress, CERN 200, humorously and philosophically explores the science at CERN. This is “CERN 43,” where the meta “subsubatomic” is at play, courtesy of Cordite Poetry Review:

I dreamt the firewall debate only engendered slews of new language until the O.E.D. could no longer keep up with the scientific lingo being born daily, hourly, by the minute and second. Subsubatomic particles beyond Leptons, neutrinos, the Higgs Bosons, Cherenkov detectors and particulates of spooky matter meant to be quantum post-post pre-octanic subor or postorganic space rooting in the rayites of bits of bundles of blotchers needing names for whatever that green goo was or could be a line crossing an advanced version of a nuclear electroinstascope—but then even those words were brought into doubts by SoupCanning Maldacena theories of particulate redirections. Translators, linguists and theorists alike were collapsing from exhaustion, servers and backup generators were being fried, bundles of wires in and out of cerebral cortexes were called into question until there was nothing left to do but unplug it all, go dark, pause, wait, sleep.

I see these poems by Wertheim, beaulieu, and Dick as examples of U+F+O+L+A+N+G+U+A+G+E, unidentified flying objects that are traveling through unfamiliar territory, objects that travel as ships in the mind—and the mind is part of the physical ecology of spacetime in the multiverse—by way of warp drive, where it is not the objects that move but the spacetime around the objects that move. As seen in Maria Damon’s textile poems, where she weaves and cross-stitches visual poems by opening and closing strings of yarn, these objects can take any form. And as suggested by Damon’s new visual textile poem, “Poetics as a Theory of Everything,” which Damon made to serve as the cover image for Ira Livingston’s forthcoming book of the same name on poetry, complexity, systems theory, and emergence, what poetics and everything means is the question.