With poets using the Earth itself as a mode of composition for textual erasures and explorations of physical systems in relation to poetics, I imagine a future where an astronaut-poet might plant an adamantine sound poem in the icy particle rings of Saturn to see if it could withstand bombardments and pressures from the cosmos. Perhaps the icy particles would play the decomposing sound poem, changing as it decays, to a live audience on a nearby space station. Maybe the poem would be titled after the language of celestial mechanics: “Orbital Resonances.”

While Stephen Collis, Jordan Scott, Bhanu Kapil, and mIEKAL aND are not astronauts, they are, to my mind, psychonaut explorers of language and ecology. Leaving open copies of Charles Darwin’s On the Origin of Species in five distinct ecosystems in British Columbia and photographing the ecological decomposition, Stephen Collis and Jordan Scott, in their collaborative book, Decomp (Coach House Books, 2013) write:

Dear Reader, we calm the waves that are particles that are waves that are rolling through matter quantum and gathered now near this word sou, the re being of bodies, the earth unre able. Do we feign reflection? Say textual decomposition is no mere figure of natural process. Say natural processes are in fact figures too. Even the monstrous wordlessness we abode by here, no feedback, gaping maw. Just zone, its permeable and moving boundary. The book is buried and we cannot read a thing. The sea beside us. Secret motions of branches, forest language, imperfect tendrils ersl ess. 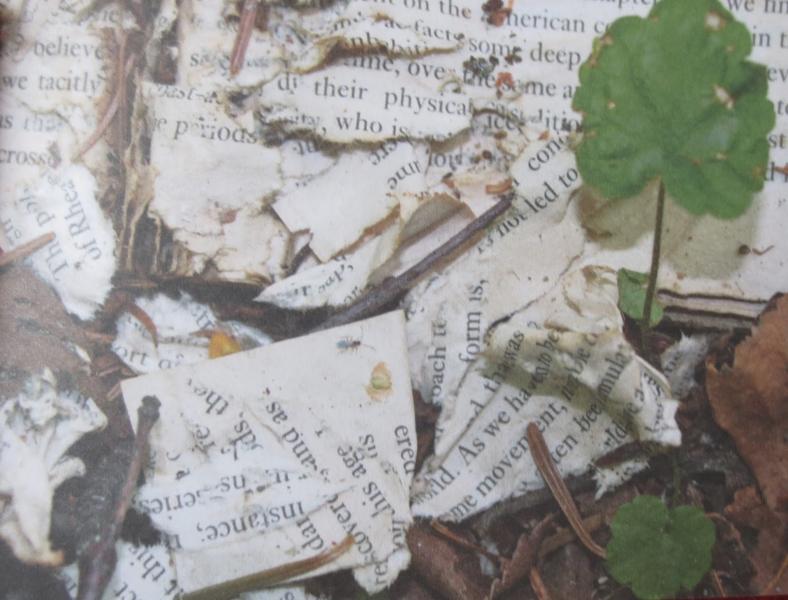 When I learned of Collis and Scott’s Decomp, I immediately thought of Schizophrene (Nightboat Books, 2011) by Bhanu Kapil, my friend and former colleague, who used ecological decomposition as a method of composition in her book:

I threw the book into the dark garden. The account begun mid-ocean, in a storm.

I remember when she told me she did this. We were talking in my office one early evening, and she told me that she had thrown her book manuscript into her Loveland, Colorado, garden. I think she called it a garden-book. Before she stopped by, I was using graphics software to make erasures in a visual poem I wrote that revolved around an image of a tesseract, a mathematical representation of the fourth dimension in physics, otherwise known as a hypercube or 4D analogue of a cube. After she left, I made notes from our conversation and performed erasures on them: 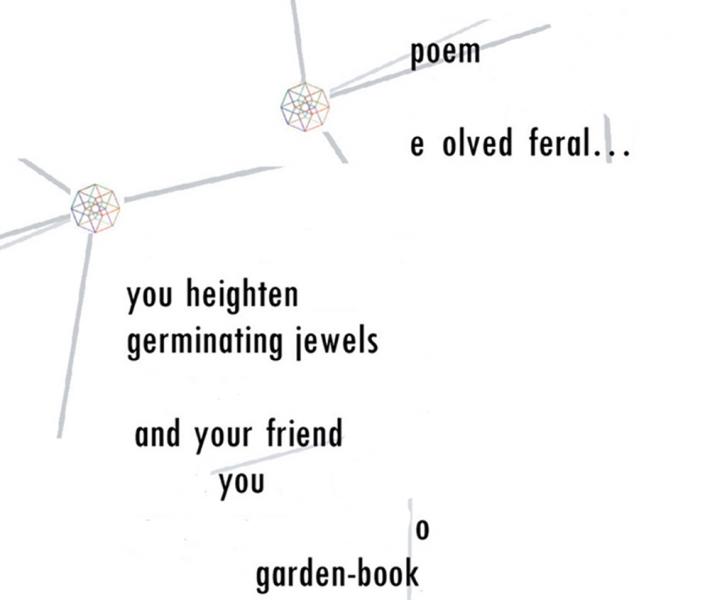 A page from my visual tesseract poem that I made after hearing from Bhanu Kapil that she threw her book into her garden.

While writers have been performing text and image-based erasures for years, and while visual artists have long used the Earth as a unit of composition — think Robert Smithson’s famous Spiral Jetty — that Collis, Scott, and Kapil are using the Earth as a mode of composition for decomposition feels fresh and critically robust. In addressing how to read Decomp, Jonathan Skinner, in his introduction, says:

You piece it together. What gets communicated in the soil. We are nesting in these books. A worm finds its way through fibre, indifferent to the letter.

Even though the worm may be indifferent to the letter, the letter is not indifferent to the worm. That is one distinction between worm language and human language. Yes, there is worm language, the wiggly trails made by a worm’s movement. My friend mIEKAL aND of Dreamtime Village, a permaculture, art, and media community in the Driftless Bioregion of southwest Wisconsin, makes visual poems out of worm language and other unexpected treasures: the grooves in firewood, purported alien codexes, untranslated hieroglyphs. 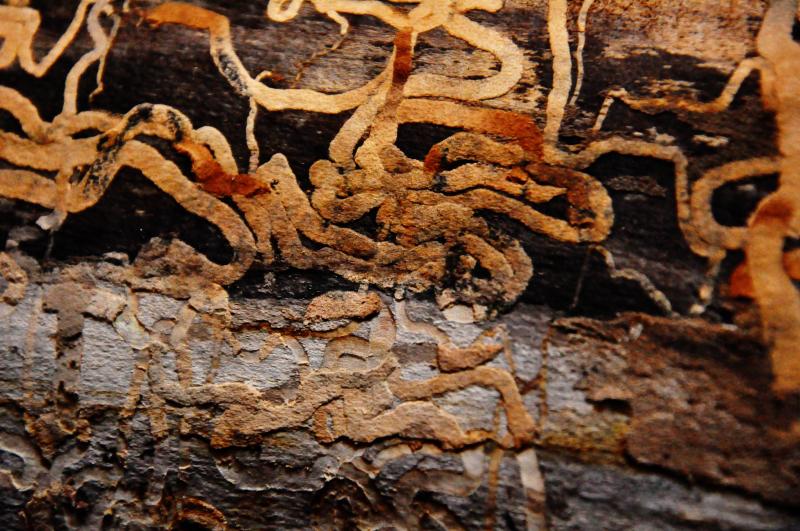 Is the difference between human language and the Earth’s eco-languages the contextual mode of communication? Does the Earth, as in other physical systems in the multiverse, communicate in languages that cannot be accessed by ordinary means? Are some forms of poetry unreadable languages of physical systems, of physics itself, operating as a technology outside of our usual scales of perception in the same manner as telescopes or microscopes? Like worm language, is human language a trail from our human movements, and, if so, how could we move to make more alphabets? Here I am thinking of space travel again. In the future, when astronaut-poets go to outer space to plant their sound poems in the icy rings of Saturn, might they also construct a poetic language modeled on the fleeting wakes of jet fuel trailing their rocketships?

The ship docked, and I found my home in a grid system: the damp wooden stool in the bath, a slice of bread with cheese on it, and so on. All my life, I’ve been trying to adhere to the surface of your city, your three grey rectangles split into four parts: a red dot, the axis rotated seventy six degrees, and so on.

But then I threw the book into the grid. It was a wet grid.

The snow wet the book then froze it like a passive sun. These notes are directed towards the region I wanted to perceive but could not. Notes for a schizophrene night, a schizophrene day, a rapid sketch.

The book before writing, arcing once more through the crisp dark air. And the line the book makes is an axis, a hunk of electromagnetic fur torn from the side of something still living and thrown, like a wire, threaded, a spark towards the grass.

A line for someone on their first voyage, a non-contemporary subject, the woman or even the man, the person with an articulate gender, a flux where the body always is: who asks what’s forbidden, what’s expected. In the annular zone. In the airport. On the earth.

Students in one of Derek Beaulieu’s classes at the Alberta College of Art and Design responded to Stephen Collis and Jordan Scott’s Decomp via sound art. Many are compiled here at the Coach House Books website.