'The binary is only a metaphor' — SS Prasad

I first began this commentary by writing about poetry and quantum supercomputers as well as the failure of Western science from Democritus to the present day in perpetuating the belief in elementary particles, spanning from the atom as the central concept of materialism in Greek philosophy to the open and closed strings in contemporary string theory. (More on this later.)

Now I want to discuss the nanopoetry of SS Prasad, an artist and writer in India whose work I first learned about in the “Scientific Wonders” issue of Karl E. Jirgens’ Canadian poetry magazine, Rampike. I was in the projection booth at the Andy Warhol Museum in Pittsburgh and had Rampike for reading material while my partner at the time, tENTATIVELY, a cONVENIENCE, was setting up a 35-millimeter movie by Crispin Glover, who was onsite.

I was at the screening of Glover’s movie because he stars as Bartleby in the movie version of Herman Melville’s Bartleby, the Scrivener, which the students in my nineteenth-century U.S. literature course at Naropa always seemed to adore or despise. I was also interested in Glover’s weird performance on David Letterman and his work in Ferris Bueller’s Day Off and Charlie’s Angels. Glover was nice enough; however, I was highly disturbed by his movie, where his developmentally-challenged actors burned live snails to death on camera. Glover addressed the issue in his Q&A, but I was dissatisfied with his response. He seemed to be a smart yet somewhat desperate actor and director who was willing to go anywhere for his art and the attention it would get him, and this included orchestrating the live destruction of sea animals on film. Still, I was conflicted. Glover was doing things other actors weren’t, like writing good books. The one I purchased, Concrete Inspection: A Manual of Information and Instructions for Inspectors with Standard and Typical Specifications (Volcanic Eruptions, 1992-2007), combines image with text. Another looked like a more simplistic version of Tom Phillips’ A Humument. 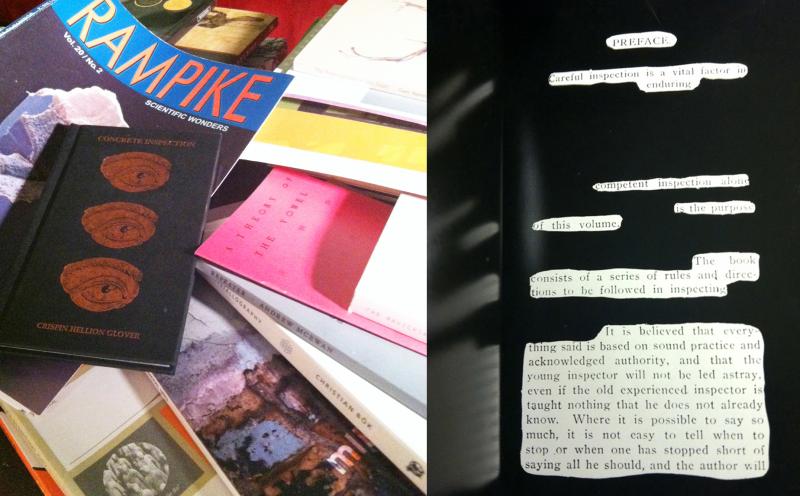 SS Prasad seemed to be willing to go anywhere for his art, too, yet he chose to integrate nano-dimensions onto text using silicon chips. Prasad, according to his artist statement in Rampike, was inspired by the scientist Ghim Wei Ho, who works on silicon nanostructures through photomicrographs that she calls “nanoflowers.” For his work, Prasad wrote a code inside microchips that replaced numbers with words using “scrapspace” alongside the microchips, creating poems that are byproducts of the chip design. Because he is using scrapspace, Prasad doesn’t need to spend thousands of dollars to write his nanopoems. Prasad seems to be one of a handful of contemporary poets who, by combining poetry with science at procedural and compositional levels, is redefining each practice. This is Prasad’s Scanning Electron Microscope (SEM) image of a nanopoem: 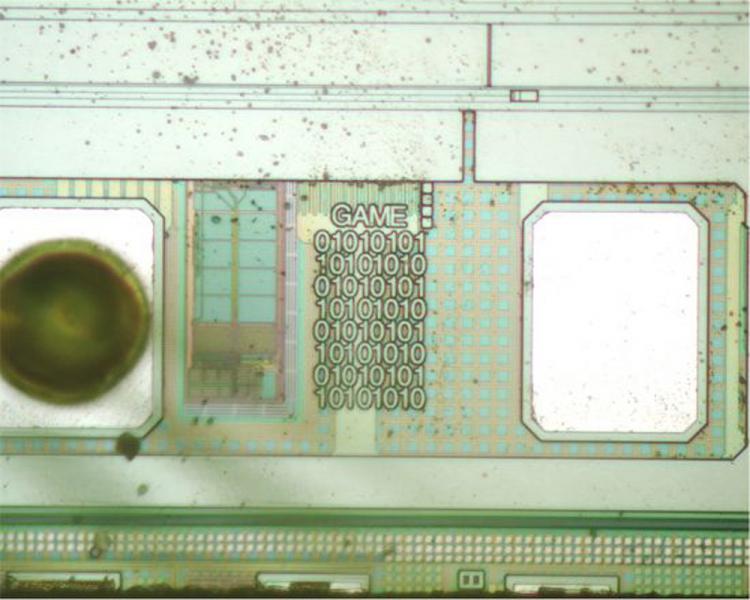 My own focus on poetry and science developed through inquiries into prevailing notions of language and time and by lifelong experiments exploring multiple states of consciousness, the prescient dramas of science fiction, the many-worlds proposition in string theory, philosophy and technology, transhumanism and ’pataphysics, and questions about assumptions that govern belief systems. Thinking through the ways that poetry and science relate has provided me a platform to challenge and be challenged by innovations across the culture that go beyond recycled debates to where intellectual ambition and failure are at the foreground. Whereas I started with the goal of synthesis, how is science like poetry and poetry like science?, I have moved into more critical and contemplative territory.

In upcoming commentaries, I’ll be reporting on other poets who are at the frontlines of debates within poetry and science. I am attempting to make distinctions between poetry that uses science in reference, poetry that operates as a scientific experiment, and science that not only functions like a poem but is poetry. I am also making bolder claims about what I see as the limiting axioms in science and poetry that create barriers for both systems. For those who know me, while I generality reject religion, ethics, and morality, which I see as domineering—and not in a sexy way, ha!—the innovations in poetry and science that I feel most passionate about purposefully or inherently defy the war culture. This is one way that I see quantum poetics as a political act—