In addition to making processing billions of times faster, quantum supercomputers will impact the way humans behave, think, and communicate. How will quantum supercomputers be used for poetic production? What kinds of poems and poetics will be possible? Andrew McEwan’s repeater (BookThug, 2012) is a book of breathtaking scope that is expanding what is possible between computational systems and poetic production. McEwan uses the 8-bit binary code of the American Standard Code for Information Interchange (ASCII) for each letter of the alphabet as an acrostic. I first encountered parts of repeater in manuscript form when McEwan came from Toronto to Boulder to take my creative writing workshop, “Quantum Poetics: Writing the Speed of Light,” in the 2009 Naropa Summer Writing Program. By writing lines of poetry that correspond to each digit of the 8-bit ASCII binary code, creating an acrostic for the alphabet, and by making the poetry constitute the code that ordinarily constitutes the letters of the poetry, McEwan subverts the binary processing of George W. Bush and digital computers. But, to my mind, it goes further.

This is a photo I took of McEwan’s first poem, “a,” written as an acrostic of the ASCII 8-bit binary code for the lowercase letter, “a,” in eight lines: 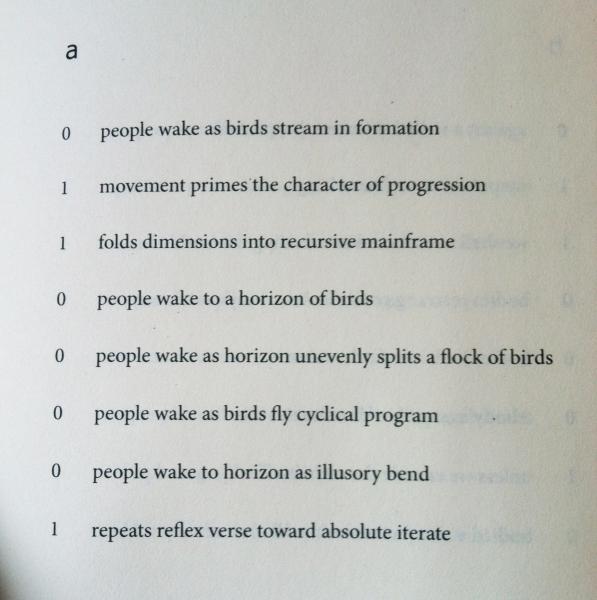 repeater is a book-length poetry project that sees itself as a codebook. It takes the foundational ASCII binary code for the letters of the alphabet and writes lines of poetry that correspond to each binary digit. In this way the poems are written into the code that is in turn written into the letter. There are also poems as indices forming supplemental studies and delving into other interactions between computer and poetic language. Overall the book enacts and plays with the troubling relationship between the rigid structures of code by reversing its hierarchy, making poetry and words constitute the code that ordinarily constitutes the letters of the poetry and words.

In our conversations, McEwan has discussed how the lines of poetry correspond to each binary digit, a key component of the project. He says:

The  “1” in binary [code] generally corresponds to  “on” and  “0” with “off.” I took this as a constraint and translated it to “continue” and “repeat.” The 1 lines continue from one to another in some relationship or movement. The 0 lines repeat, either in form, language, or meaning. In composing it, I was loosely associating the 1 with a humanized voice and 0 with a computerized voice. The division between the two breaks down by the end, and the two blend together.

Like John Keats’ notion of negative capability, where disparate elements are held in union in the mind at the same time, and like the qubits of a quantum supercomputer that behave as probabilistic superpositions, repeater broadens our notions of scale, indeterminacy, uncertainty, and paradox, where the variability of poetry stands in contrast to binary divisions and procedurally evokes how subatomic particles behave in quantum mechanics. In McEwan’s interview about his book with his publisher, he says that repeater is “an imaginary system for programming an imaginary computer.” A quantum supercomputer is also a kind of imaginary computer. What type of computer will be needed to process and compose new forms of poetry? What kind of poet will be needed to work this computer?