The periodic table of poetry

In 1869, the first version of the Periodic Table of Elements was created by Dmitri Mendeleev to illustrate the known chemical elements of the time and predict new ones. Elements are distinguished by having a single type of atom, and as they are discovered by scientists, the table grows. But what of the elements classified and discovered by poets, elements not made of atoms but language? Is poetry a kind of periodic table of language where poets chart, predict, and make elements as alchemists? Perhaps the P.T.O.E. is itself a P.O.E.M.

To talk about poetry and the Periodic Table of Elements in this contemporary moment begins, in my mind, with Jena Osman’s breakthrough hypertext poem, “The Periodic Table As Assembled by Dr. Zhivago, Oculist,” first published in the late 1990s and updated at least twice since then. In this work, the user-reader creates poems by choosing a procedure—dissolve, stir, heat, dilute, centrifuge, and/or evaporate—to facilitate a reaction between chemical elements from the periodic table that are poems written by Osman using language associated with the elements. The work suggests that language can be conceived of as a physical element of nature undergoing an infinite amount of reactions in poetry.

Michael Leong, in Cutting Time with a Knife (Black Square Editions, 2012), using William S. Burroughs and Brion Gysin’s cut-up methods and Comte de Lautréamont’s “pre-surrealist dissecting table” as theoretical frameworks to write poems that play off of phrases and ideas in T.S. Eliot’s essay, “Tradition and the Individual Talent” (1919), presents visual and text-based poems using the Periodic Table of Elements to create what I see as a kind of Periodic Table of Poetry. In the poem for Rubidium, which has the atomic number 85.4678, “the thumb of the poet is the pivot”:

Perhaps space spins toward complication in a particular direction, polarizing the economics of only and also; perhaps not even an artist has aligned this extent of refinement with the nuclear. In the end, we randomly (not spontaneously) imagine a point to view the magnetized machinery of the air.

The thumb of the poet is being linked to the opposable thumb in some mammals as a way of evoking the unique dexterity of the poet to pivot. Why does the poet pivot?  “To view the magnetized machinery of the air,” writes Leong. Electromagnetism is one of the fundamental interactions in nature. In contrast to classical electromagnetism, a branch of theoretical physics that relies on the outdated ideas of Isaac Newton’s classical mechanics, which, using Leong’s language, operates as an “economics of only and also,” Robert Feynman’s quantum electrodynamics, the quantum mechanical version of classical electromagnetism, describes how electrically charged particles interact by exchanging photons. Poetry is also an exchange between the text and thinker, and Cutting Time With a Knife, so named after Burroughs’ statement that “If you cut into the present, the future leaks out,” creates an exchange between poetry and science. Leong’s project has a mechanics that is more quantum than classical.

Whereas Osman and Leong are using the Periodic Table of Elements at cosmological scales by addressing the entire periodic table and concepts evoked by the system, other poets such as Evelyn Reilly and Adam Dickinson are going more subatomic by exploring the intersections between language and chemical elements as well as their combinations in polymers and other substances in implicitly political and activist writing. Also of note is Craig Dworkin’s poem, “Fact,” which presents the chemical compounds of ink on paper as a poem, though this piece, rather than being political and activist is self-reflexive and slap-stick.

In Styrofoam (Roof Books, 2009), Reilly critiques the reliance on environmentally harmful substances by writing poems about the chemical composition of Styrofoam, the trade name for polystyrene. Dickinson, in The Polymers (House of Anansi Press, 2013), presents visual and text-based poems on plastic molecules and how the unsustainability of synthetic plastic relates to human culture, linguistics, and reality. In the preface titled “Cellophane,” smartly presented on transparent paper, Dickinson writes:

Polymers are giant molecules composed of numerous repeating parts. As long chains, they form the basis of both synthetic and natural plastics—the structures of the human brain, skin, hair, as well as DNA all are composed of polymers. As prevalent as polymers are biologically, plastic, as a cultural and industrial commodity, is similarly omnipresent. Its ubiquity, however, marks a curious contradictory tension: plastic is at once outmoded and futuristic, colloquial and scientific, a polluting substance that is also intimately associated with our lives. The origins of plastic, as an industrial material, have extended and continue to extend out of attempts to mimic or substitute for things in the natural world. Therefore, plastic marks both the presence and the absence of natural objects, embodying tension between the literal and the metaphorical, as it recreates the world as an alternate or translated reality....If DNA is the digital memory of a species passed forward through time, then the social polymers of iterative behaviour, including their flammable appendices and polluting precipitates, constitute a plastic shovel with which the analogue body digs its own grave. Or plants its flag on the moon. Or builds a bionic limb. Plastic is the grinning salt of capitalism, Karl Marx said in speculative writings on the hydrocarbon economy. What follows is a closer look at the teeth [.]

In a new project underway, Anatomic: Biosemiotic Bodies and Chemical Environments, Dickinson is going subatomic and cosmological at the same time by setting out to write a book of poetry that will emerge from a toxicological and symbiotic map of his own body, a map that will respond to considerations in poetics, biology, ethics, and the environmental sciences. At this stage, he is getting his blood and urine tested and having his microbiome synthesized by determining which microorganisms share his body space: 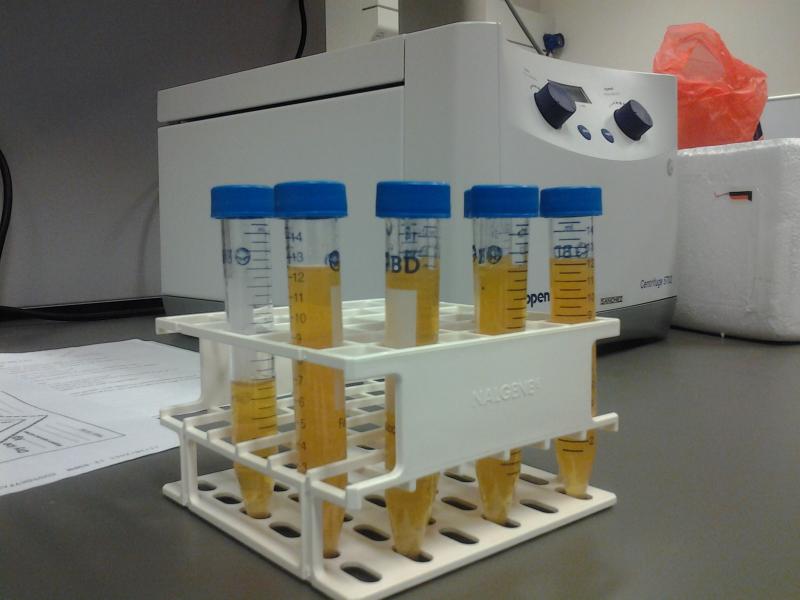 In one of our recent exchanges, Dickinson explains:

This is a research-creation project that involves biomonitoring and microbiome testing to produce a book of poetry that reframes the body (my body) as a being overwritten by toxic chemicals yet constantly subject (in necessary ways) to the biosemiotic interference of other microbial lifeforms. My objective is to combine innovative trends in contemporary poetics with science and environmental ethics by researching and writing poetry that will emerge (in terms of themes and methodological approaches) from a toxicological and symbiotic map of my own body. By focusing on the “outside” that is “inside,” I hope to draw attention to the coextensive and intra-active nature of the body with its environment and the consequent implications for linking the human to the nonhuman and the personal to the global in environmental ethics.

One exciting feature of this project is that with Dickinson using his own body in his experiments, the complication between the conceptual and the confessional is at play. I see this feature of the project as being especially useful for encouraging more discourse between conceptual literature and poetry that is confessional, expressive, and identity-based. Seemingly unbounded by received ideas in both poetry and science, Dickinson, in mapping the composition of his own body and using poetics and science to do so, challenges those practicing both science and poetry to imagine their work and respond to the work of others in more ambitious transdisciplinary contexts.