Tangible expressions of a present poetic

A review of E-Poetry 2013 Festival London

It is a common misconception that digital media writing is about computers, networks, or any given technology. Of course, given that today’s technologies of writing are digital, a poetics to decenter such modes would engage digital processes. However, such a poetics does not begin and end with the digital. It embraces poetic interests from flickering cave signifiers through object-oriented array programming to microscopic tomes etched in chromosomes. The digital is simply the present location for a larger poetic investigation extending across multiple material manifestations: it is — but equally it isn’t — about digital technology. It is this area between the “is” and the “isn’t” to which, singularly, without peer, and without wish for authority, E-Poetry is dedicated. Indeed, the E-Poetry 2013 Kingston-London festival is “digital” — it involves new media — but to describe it more accurately, it is about hybrid forms. It is a place for conversation about emergent language, visual expression, translation, code-as-writing, word works, and performance tropes from the point of view of the practitioner and artist-scholar. We’re all knee-deep in this electronic shift; the point is pivot the lens from the consumer to the inventor, from the receiver to the agitator.

In (paper) poetic practice today, it is almost as if we are seeing our emerging writers entering a new type of “lost generation.” Poets now are seen to be either/or — either “hacker-programmers” or “poets,” i.e., one or the other, geeks with programming manuals or successors to page-based innovative forms of practice. As if there were no connecting tissues! But, presently, there is a gap. Those who are digital tend not to have heard of Donald Allen’s New American Poetry; those who are writing page-based texts would never think of coming to E-Poetry. Not to suggest that experiencing E-Poetry is requisite to effectively commanding the present electro-frenzy of the word, but heads-up: there is material here that probably should not be completely overlooked. 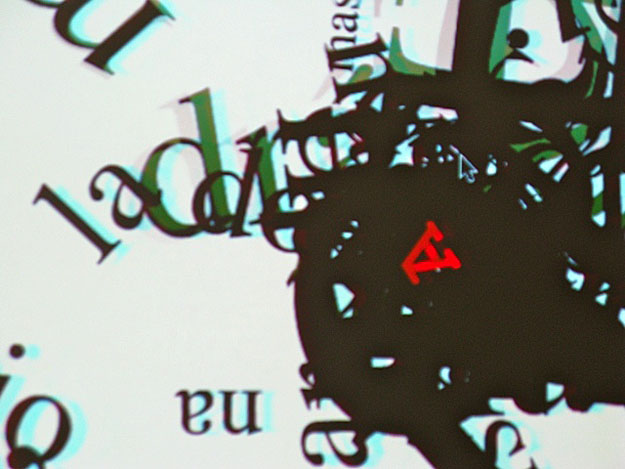 The first and longest-running convocation dedicated to the digital literary arts, E-Poetry is the only festival that seeks to celebrate writing in all forms, attentive to the tuning fork of the digital as material — yes, of course — but equally focused on reaching across the border walls separating print from digital, one culture from another, languages, media, continents, generations, and genres. Innovative literature imagines a world with no boundaries. At E-Poetry, digital literature brandishes no special birthright; it is not autonomous or “purebred” but inherently mixed: whether in performance, via MP3, or on a Savoy “Bop 900 series” 78 rpm, Charlie Parker’s “Thriving on a Riff” continues to resonate with multiple transgressive evocations through an unlimited interweaving of cultural formations.

E-Poetry draws its inspiration not from academic or literary conferences, or institutions, or trade associations, or technology-dependent modes of inquiry. Its spirit extends from the discipline-changing poetry festivals that awakened literature of the ’50s and ’60s to a new sense of voice. Festivals such as the First Festival of Modern Poetry in 1947, the 1963 Vancouver Poetry Conference, and the Berkeley Poetry Conference, 1965, though all organized with specific goals in mind, established an engagement with new fields of poetic vision. They brought poetry from the cerebellum to the solar plexus. They were not only focused on specific media, historic events, personalities, and forms of publication; they expressed a larger vision — literary creation as celebratory, human-centered, how “we,” as an increasingly complex social organism, move forward into the ever richer arenas of imaginative expression.

It is the energy of the above mentioned festivals upon which E-Poetry draws. It is not trying to prove that digital literature has a place in the academy or that it is respectable or that it is the form of the future. Such issues tend to work themselves out. E-Poetry is about the continued practice of innovative forms as an ongoing process. The “here” of E-Poetry encompasses the continuing “there” of poetics, a fluidity of meaning. By this ordering, Gertrude Stein, Walt Whitman, and Emily Dickinson were all digital poets — and some who identify as “digital poets” may not be. Likewise, many of the electronic pioneers (as exploration of their newly established archives is beginning to reveal) are possibly even more paper-based than their historic predecessors. Of course, the issue is not whether a work is digital or not; all media are welcome here. The point is that living on both sides of that line is living in the present. 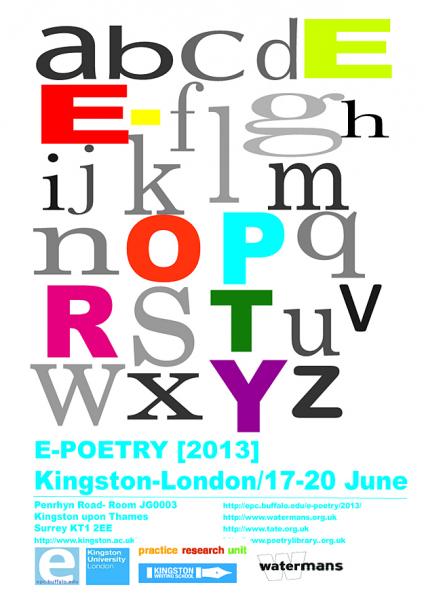 E-Poetry 2013 Kingston-London advanced a number of cross-disciplinary and media shattering approaches initiated by the previous E-Poetry 2011 in Buffalo. (Indeed, the previous E-Poetry opened the field to wider forms, contexts, cultures. Only Google glasses could have prevented one seeing it at the time. So much was new, a widened field — Cuban hip-hop, Joan LaBarbara, UK sound poets, a full digital poetry & dance theatre production — the stage was set!) Building on E‑Poetry 2011, the approaches in E-Poetry 2013 extended the spirit of new forms of artistic invention as existing above and beyond specific digital modes — not restricted to Pleistocene web protocols, hacked hermeneutics: not limited to computers but before, inside, and beyond the expressive powers of HTML.

There were no conference themes, no hierarchical keynotes, no parallel sessions. In marked contradistinction to other events where the theme may be somewhat arbitrary, where one voice is deemed more important than others, where presenters may be disappointed by the turnout at their parallel booked session, E-Poetry strives to foster a sense of community, common respect, and celebratory attentiveness. The projects and papers of the participants themselves comprise the theme, a collective wellspring; participants bring to the table issues that have meaning to them at the moment.

E-Poetry facilitates a union of practices, ideas, inflows, energies, formats, forms, projections, words, images, resonances, disturbances, shining in the near-subterranean Kingston ritual kiva, batted about aboard a boat on the Thames, astonishingly evident in its stellar exhibition, resonant at the Royal Festival Hall Poetry Library, honored at Tate Britain, bellowing across the expanse of the Watermans theatre, its great half circle of performance space first glimpsed on the Festival’s opening night at the edge of the out-of-scale verdure of Kew Gardens. For the final day, this theatre was a site of vigil, a morning-to-night series of resonant, sonic, visual word-rushes, filling the theatre with swells of presence. Like waves, the works came one after another, with just enough time in between each performance to catch your breath. But then the next one came, similarly enveloping you, each one different; each a detailed investigation of one facet of a total aesthetic that saturated cultural being; each a component of something larger than itself, something only the collective whole could suggest. 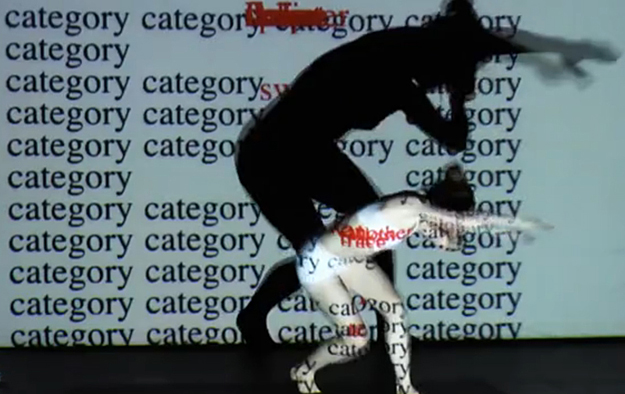 E-Poetry advisory board members served as directors of ceremonies for all events. Laura Shackelford served as program coordinator; María Mencía, local convener. There were views from various UK regions, representing the cultural diversity within the isle and its different literary perspectives; there were two special panels of younger practitioners from Russia, hosted by Natalia Fedorova; there was Scott Weintraub’s panel on Latin American electronic literature, and presenters from Chile, Peru, Argentina, Brazil, Mexico, Puerto Rico, Poland, Latvia, Slovakia, Romania, Greece, Iran, and Hong Kong, as well as the Netherlands, Germany, Spain, Norway, Sweden, France, Australia, Canada, and the US.

Especially exciting was the number of women artists and scholars and emerging practitioners, many who appear in the program in highly visible places. The idea was really to promote an embracing mix of critical perspectives and artistic approaches. There were poetically reflective pieces, step-by-step “readings” of tools of reading. There were unexpected triumphant performances, theatrical moments, journeys through erasure; there was sound-making, live book-production, dances with light; there were spectra upon spectra of ways of entering the word, from portals that provided uncommon views. It was inspiring, comforting, energizing, emotional; its references came through cross-weavings of performance, oratory, introspection, comedy, cacophony, revelatory peeling back of layers. Its events and intriguing installations were all new works; they embodied range, style, diverse conversations, threads, themes, motifs, an impressive range of innovative performances (an E-Poetry feature); they followed twists and turns with revelatory moments amid intertwined paths of expression. 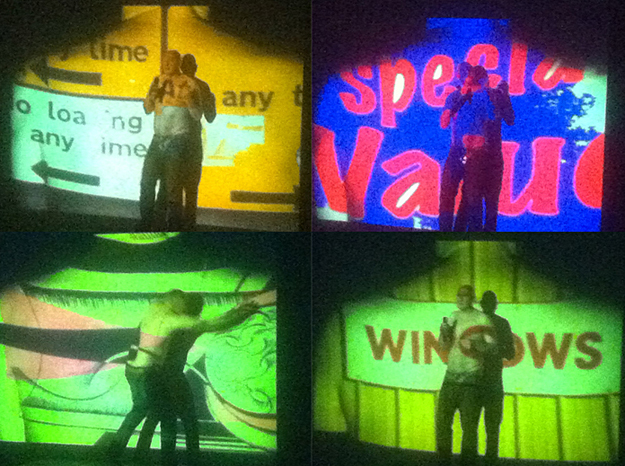 Included were an unforgettable text-upon-flesh performance by cris cheek, Benjamin R. Moreno’s game-controller irradiation of an iconic seventeenth-century Spanish poem, Catherine Siller’s astonishing multigenre textual physicality, Serge Bouchardon and Pierre Fourny’s inventive word-by-machine antics, Ian Hatcher’s breath-talk-ing increments, Amaranth Borsuk’s evocative Handiwork and her 3-dimensional hovering “Between Page and Screen” (Brad Bouse, programmer), Alexander Mouton’s increasingly self-confident epic “Passings,” the unremitting intensity of Russia’s Machine Libertine, sound poetry from Chile, a book-making performance from Galicia, cooking the books (literally) with kevin mcpherson eckhoff and Jake Kennedy, and multigenre music-projection-performance from Romania, along with numerous known artists in the field including John Cayley (“Phrase Stitched Writing”), Talan Memmott (“Huckleberry Finnegans Wake,” with Snodgrass and Tempest), and Loss Pequeño Glazier (“On Guillemets”). The Mencía-curated exhibition “Words Unstable on the Table” provided new frames, radically necessary new instabilities of language vision including Zuzana Husárová and Ľubomír Panák’s body-scale interactive plunge into writing, “I : * ttter.” A gamut of technologies were used: programming, word performance, dance, web technologies, alphabetic voice, procedure, games, postmodern theory, video production, digital communications theater, concrete concussions, new music, and sound poetry pulsations. All were suspended on “the idea,” the materiality of the text in flux, a new stance towards art-making in the world in which we work, words as radical and experimental they could have equally been written in the sky (or in the mud of the dry tidal tributary outside Watermans). The festival culminated just like a truly rambunctious celebration should close — with us being told to leave the theatre. The last two performances then, via a negotiated extension cord fed to us under a locked door, allowed the festival to coalesce into an introspective and tender nocturnal half-circle on the floor amid glowing screens of colorful exhibition panels. A projector was aimed at the wall — it was all blue light — and the poets performed with the audience seated in a semicircle on the floor around them. The final two presentations, the textual vision of Jason Lewis and the fragile, self-dissecting introspection of David Jhave Johnston, were intimate, without amplification, allowing textures of voice, quiet sounds of exhalations or sighs or astonishment. It was the work in its clearest form. There may have never been a more personal, more direct, or more triumphant moment in recent E-Poetry gatherings. It was engaging to be there, one of those moments when what we came for was simply there. It was a settling of all that had occurred over three and a half days into moments made real by our seated presence in the glow of the imagination.

There were moments of poetry. E-Poetry 2015 will take place in Buenos Aires, Argentina, June 9–12, 2015. Call for proposals forthcoming in 2014 at the Electronic Poetry Center. You may also request being added to the E-Poetry Festival mailing list.

Tangible expressions of a present poetic