A narrative recollection of the week of the Chicago Durutti Skool

hosted by Red Rover Series & the Next Objectivists

In May 2011, Jennifer Karmin and I, as curators of the Red Rover Series {readings that play with reading}[1] in Chicago, responded to a call for action by Juliana Spahr and Joshua Clover.[2] Their idea was to encourage poets all over the US to implement their poetics in a political and active sense as part of a nationwide initiative called the Durutti Skool.[3] Red Rover joined forces with other groups already mobilized and mobilizing across the city for a week of activities starting with May Day. First, we helped publicize and joined a gathering poet John Keene[4] had called for “at the Haymarket Martyr’s Statue in Haymarket Square (the actual memorial site, which sits in the park several miles west of that site, is where all the major unions held their commemoration). It was the 125th anniversary of the Haymarket Affair of 1886, so the confluence with May Day was especially propitious.”[5] A good group gathered downtown early on Sunday. We resisted the wind, and read poems by authors who had written about labor in the past, and to speak about our own experiences.[6] That Tuesday, I arrived at Mess Hall [7] in the Roger’s Park neighborhood to join the Next Objectivists’ [8] intense reading practice and discussion of the connection between literary form and political statement. The closing event of our “skool” (which was sort of a way of schooling ourselves about participation in community as political action) was one of our own devising. Red Rover hosted poets Michelle Taransky and Frank Rogaczewski at Outer Space Studio[9] in Chicago’s Wicker Park. 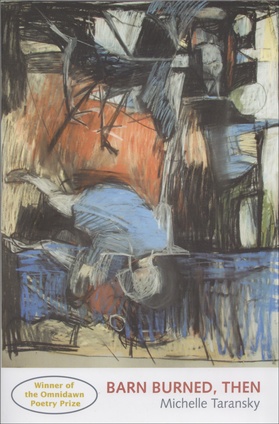 Michelle Taransky is the author of Barn Burned, Then (Omnidawn, 2009) and a notoriously energetic organizer in various poetry communities. In fact, when she walked into Mess Hall to join the current incarnation of the Next Objectivists, the vibe of joyful reunion was palpable. At the closing event a few days later, she chose not to talk about her own work, but to question what constitutes the politics of the contemporary poetry community. Her talk was uncomfortable and hilarious. It’s difficult to turn the lens on ourselves and ask how the politics that we so bravely critique in the “world at large” are actually reflected in the relationships we cultivate in the poetry world. Because Michelle was in town, she, Jen, and I went to Iowa City to give a reading after the Durutti Skool was officially over. It wasn’t until we were in the rental car on the way to Iowa City that we started talking about barns. And banks. And the painting of the barn in the bank. At our reading in Iowa City, Michelle explained to listeners that the book is split into two major parts, “Barn Book” and “Bank Book.” Holding the book in my hand, I can note that the lines are split along seams almost severely. However, the rhythm created throughout the book as a whole is consistent and as relentless as “progress” and “culture.” Splitting sometimes seems like our only way to approach the concepts in the world that create it as actually separate and able to be analyzed, manipulated. America is where banks and barns come together in a book that makes a small comment in the continuum. Sitting on a bench in a bank staring at the image of a past we want to save in an account. Account for. Profit from. 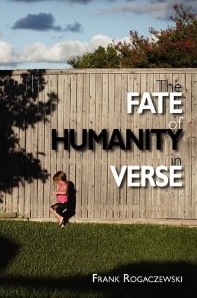 I first encountered Frank Rogaczewski’s poetry in American Letters and Commentary 20, which came out in 2009. I read the entire issue from cover to cover and came upon Frank’s two poems at the very back. It had the curious effect of fulfilling everything I’d wanted from the all the poems that had come before it in the issue. Not that my desire as a consumer of poetry is the point here. Frank’s pieces are prose, meaning that they dispense with line break to suggest a narrative reflection on our culture’s (America-at-large AND poets-at-large) propensity to think their poems as products into existence. And Frank is well aware of his poems’ potential as cultural capital. He plays, creates parodies that are ironic reflections of poetry’s role in the world. I call the pieces, mostly a page long or a little more, poetry, though, because of the almost microscopic linguistically smart elements that they utilize. The Fate of Humanity in Verse never includes anything for granted that might just be easily seen and consumed as “poetic.”

Rather, Frank’s writing is rife with challenges about poetry and poetics, as well as references to writers and modes of writing. Fate is full of the type of language play that capitalizes on the sound of the words for fun, to create a kind of pleasure that is not to be blindly consumed. Fate takes the opportunity of any coincidence, whether linguistic or historical, to go off on threads that are always relevant, ultimately weaving together a large and beautifully unwieldy poetry/commentary. Of course, my delight in the particular way that Frank deals with issues of poetry and social concerns, as well as the appropriately light treatment that he gives Marxism throughout his work, may be partially purely subjective, my own preference for what poetry should do. But of course that usually goes without saying.

Or, to (try and) put it perfectly, as Frank does in his poem The Day They Outsourced America, “[p]erhaps one way to phrase our question is ‘Can poetry mutter?’” Not that I don’t think that we should take these questions seriously, but I worry about how seriousness can box in the best of us. What kind of light can we let in to our writing or actions to connect correctly to others, I mean to really create community? And to recognize and utilize that community as a potential political force, whatever that ends up looking like. What stuck with me is the idea to create continuity, a feeling of reaching out and connecting continuously. To redefine aesthetically and institutionally.

[1] Each event in the Red Rover Series is designed as a reading experiment with participation by local, national, and international writers, artists, and performers. The series was founded in 2005 by Amina Cain and Jennifer Karmin.

[2] In August 2010, Juliana and Joshua conducted a lottery to determine a solid group of around twenty-five writers to gather as part of the 95 Cent Skool in Berkeley, California, to discuss poetry and Marxism specifically. I was in attendance.

[3] From the Chicago announcement: “The Durutti Skool & Red Rover Series would like to invite you to take part in aseries of events concerning poetry, social existence, Marxism and Anarchism. Our main concern is to join in the greater conversation occurring around the country at other Durutti Skools this year about poetry itself as a catalyst for social change. The idea for the skools began last summer when a group of poets met in Berkeley, California, as part of the 95 Cent Skool. All participants were invited to form their own skools in order to continue the conversation and encourage poets to connect more strongly with their communities and ideas about writing, community, and change.”

[4] Author of Annotations and Seismosis (with Christopher Stackhouse), professor at Northwestern University, Chicago.

[7] Mess Hall is a Chicago-based experimental cultural center. It is a place where visual art, radical politics, creative urban planning, applied ecological design, and other things intersect and inform each other. They host exhibitions, discussions, film screenings, brunchlucks (brunch + potluck), workshops, concerts, campaigns, meetings (both closed and open), and more.

[8] Statement from the Next Objectivists: “a free, open-to-the-public poetry workshop dedicated to the study & reproduction of the outside real. We take this term from the ‘Black Mountain’ poet Edward Dorn & our name from the second generation modernist poets associated with the Objectivist Press. Although writers associated with the Objectivists and Black Mountain ‘schools’ (Bunting, Creeley, H.D., Niedecker, Pound, Reznikoff, Williams, Zukofsky to name only those we’ve already studied) are prominent stars in our constellation, our objective is not to reproduce any particular style, mode or tradition, but instead to draw on many different ways of doing and making in order to isolate those practices of writing & publishing & above all those poetic effects which lead us out of the neoliberal present & the future it imagines. The Next Objectivists Poetry Workshop was founded in January 2009. Members make the curriculum as we go along. Our meetings are potlucks and beginners are always welcome. We read, discuss & write poetry together.”

[9] Outer Space Studio is an artist-run performance space. Each member pays a share of the rent so that the community has a collective space for meetings, rehearsals, and events.