Wild Peach, S*an D. Henry-Smith’s collection of poems and photographs, is atmospheric: its poems hang in a mist at the top of the page. They touch down gently, then cling to the surface for a moment before they soak into my reading skin. There’s a sonic fog to them, a quality of density as alliteration and internal resonances accumulate. At the same time, they offer porosity, as in Henry-Smith’s invitation to “hear the spaces between the outpour.”[1] The images, appearing periodically throughout the book, each occupy their own page, in a format that highlights their associative rather than illustrative relationship to the poems. Making us aware of all our openings, Wild Peach’s “ear’th” (114) is a membrane, a site of contact where the sound world gets in.

To think with the photographs in Wild Peach, I look through the poems’ attentions: what can they show me about the images keeping them company? Henry-Smith’s compositions appear to use only available light — they embrace shadow, the softer gradation of texture in a shaded interior — and the poems themselves have a lot to say about light:

this is my responsibility. I am accountable for Light (111)

Light burst through the window like it needed to be there, like it was late for something (119)

In these lines, light is a decision we can make in every moment of the day. It’s as unconscious as air, until we miss it.

In a windowsill, a butterfly lies in and out of a shadow, partly underneath a dried leaf. It’s just barely indoors, just visible. Rather than lighting it up, Henry-Smith lets it hold its place in the variable lightplanes of the sill and the almost-interior landscape of chipped paint and dirt spilled from potted plants. I take this negotiation of threshold back to the poems. 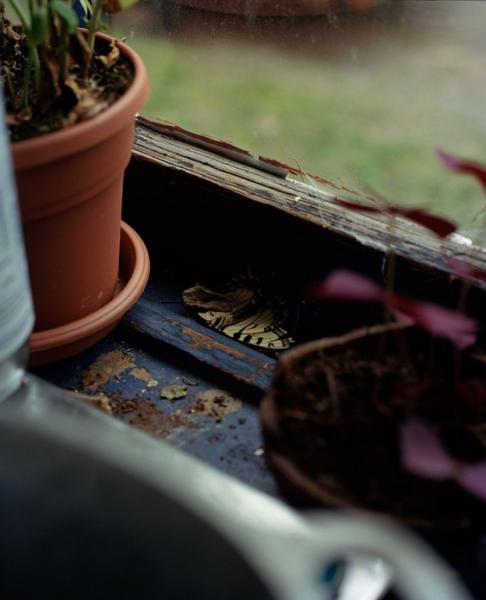 Periodically, moments of directness emerge from Henry-Smith’s dreamy, ambient register of lists — oregano, fog, and dirt; lilies, salt, and wool — to confront us with the context for their attention to the soft, minute, and twilit. Questions like “am I too quiet for the black radical tradition or am I too late” (148) and “is this afrofuturist if the primary concern is the soil” (139) ask, Is it still possible to enter a tradition? How can we cultivate the radical between the soil pores of abstraction and amorphousness? If there is a future on the earth, will there be any room for stillness? Henry-Smith doesn’t resolve these concerns, and their open questioning animates the poems, which understand radical Black lineage as a process that won’t be satisfied with naming itself.

In an interview, speaking against the expectation that her paintings would be figurative, with clear political messaging, Mary Lovelace O’Neal said her abstract work “answered the social question of Blackness.” If Wild Peach has its own answer, we might find it in Henry-Smith’s formulation of “w/”-ness, as in the section “w/ you in the slow hour” (57–108), which spreads out into the poems’ dual commitments to keeping company and looking for escape. Henry-Smith holds this tension through their negotiations with chance and the systematic, working time and living time, and, as reflected in the cover’s design, a spiral opening itself to expansiveness, cycles and ways out of them.

During a reading in conjunction with their recent exhibition at White Columns, Henry-Smith spoke to their intention for their photographs of poets Imani Elizabeth Jackson and Taylor Johnson to be “not a representation but an exchange” (a recording of the reading, which was an entirely lovely exchange of its own, is available to view). Sitting in front of a plant-filled window, Jackson looks to the camera over a blue teacup wrapped in her hands, with most of two eyes available for us to look back into. In their left shoulder, which feels alert to the potential of lifting and turning toward us, I sense Johnson sensing the water before them and the camera at their back. Sitting in the relational space these images create for both intimacy and distance, I feel the expansive solidity of knowing a friend will be there with me without expecting me to speak. 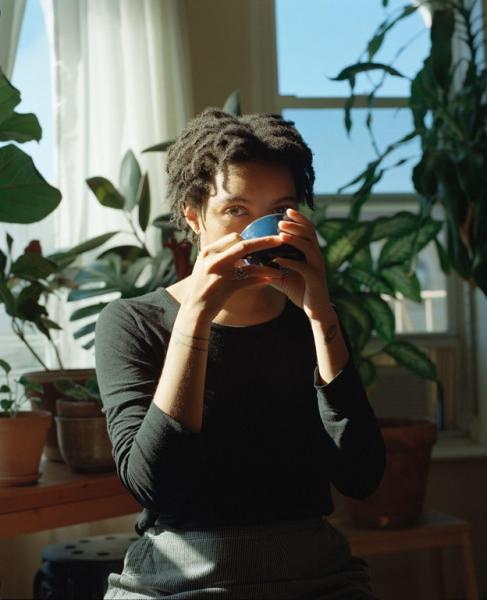 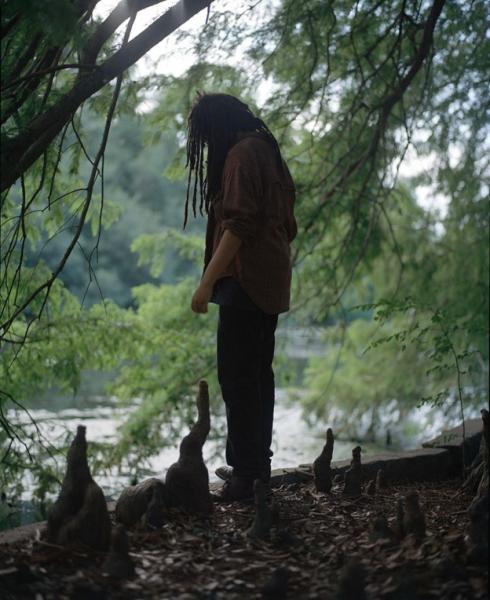 These layers of nearness and remove are too complex to be rendered through a representative framework, a shorthand that flattens entangled realities into manageable data points. Representation merely shifts surface looks. An exchange, then, is an alternative to inclusion. It’s less neatly reciprocal than it is relational. As much as Wild Peach is steeped in welcome, it also deploys a protective evasiveness: an ongoing effort toward locating a world in friendship and apart from normative structures of relation. An exchange requires us to give something in return. It also means acknowledging that there will be layers of experience unavailable for us to see.

As I sat with my notes on Wild Peach’s approaches to undermining dominant systems of knowledge, I read Tavia Nyong’o’s essay on José Muñoz and the occasion of his posthumous book The Sense of Brown (Duke University Press, 2020). As Moyra Davey relates, reading is an act of chance, and meaning is dependent on everything else you do around it. In this spirit, I don’t think Henry-Smith would mind my gathering chance texts into conversations with theirs: they suggest, “pleasure creepin’ up now. you can’t really plan for it, but make sure there’s a seat ready” (118).

Ephemeral knowing is intuitive, observable in the unit of a glimpse, a moment everyone involved will describe differently later that afternoon. Henry-Smith’s butterfly — ephemeral icon — is both delicate and short-lived, and if let be, it will still be here unfaded on the windowsill. In the same spirit of the ephemeral trace, the poems foray in search of alternate ways of knowing that could, as Henry-Smith suggests, “correct our violent misreadings” (44) and disrupt the foregone conclusions of the empirical.

A section called “isosceles, serial” unearths a shared discontent with taxonomies that strip the slipperiness from disorderly, multiplicitous being:

tell me when you reach the horizon for our
elaborate revenge

But money is another self-contained loop, as “the whims of Capital can only / end one way” (45), so those keeping company in this poem turn outward to the nonhuman realm of the “sleepy seahorse” and “seamoss monarchy” (43). They also turn toward each other, in a bid to redefine their relationality outside of capitalism’s codified order:

we saw the end of reason,

hope became the only

Horizon is unreachable, and revenge is always over the next hill, so Wild Peach’s strategy for living with the unarrivable is to inhabit the indeterminate. Henry-Smith lays a ground where the opposing poles of resistant slowness and evasive restlessness can bend back toward each other and meet. The poems know that they can operate both in motion — “the project is avoidant vast vagrant & I run to & froth” (47) — and at rest: “lazy as in rest as in anti-productivity & the myth. mist as in the non-linear ways to know the soil” (68). Skimming the water’s edges kicks up excess — imagine the light you’ll find in all those bubbles. Refusing to move before you’re ready opens up a moment where no one can make money off of you, and stillness uncovers all the time in the world to get intimate with your ear’th. If we can find a willingness to be both, there is the possibility of being “w/.” There, halfway through the book’s navigations, Henry-Smith points us to the rest of the way forward: “my friends are the only way I get through the night” (72).

To curve Henry-Smith’s spiral out in the world and then take it back home, here are some provocations I foraged from Wild Peach:

write a quiet, sticky poem: a poem that’s been preserved

a scene where resentment stands up from a fragmented field

take a walk that trains itself to identify unempirical facts