The dancing takes place in a squarish space on and above the floor.
That space is defined by hanging black screens that allow the audience to see into and beyond it. Fabric makes light of time — when lit / variously / fabric makes light of time.
There’s no periphery — nothing takes place on or in a periphery — this means that dancers “in the wings” and sound and video and light people are all at the dance / with it / not in any way marginalized or separate from it.

The dancing implicates questions of boundaries — motions within / and motions without / the hanging screens — this instantiates one form of dialog.
The motions erect the space(s) around them — they rectify it.

Against and through these screens (they function also as scrims) / black and white images (courtesy of Ursula Scherrer) appear and disappear. Sometimes entirely abstract / sometimes snippets of scene excerpted from cinema. 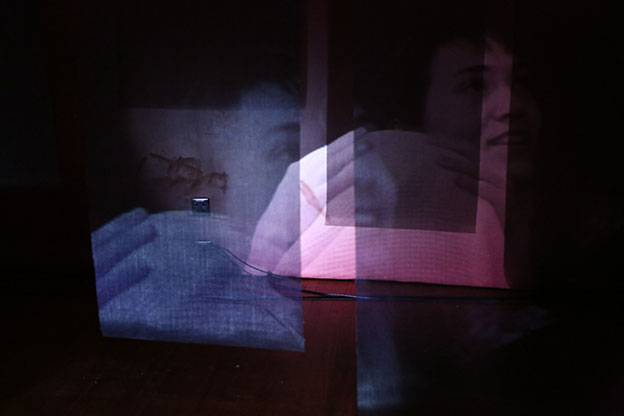 You can tell a lot about the choreographer’s point of view from where she seats the audience — the audience was seated on raised stages / looking down / while at / the dancers.

I do wonder what dance would be like if it wasn’t so frontal — would the audience then not be more everywhere & nowhere? — wouldn’t it be possible to make the audience vanish? 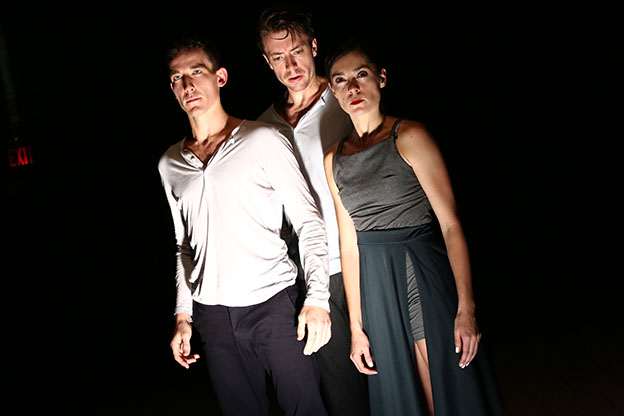 The various music sounds in no way accompany the dance — they with it are inseparable / such that no vice versa attends.

Bruce Andrews speaks his text with the two duets which Sally dances. The sounds have a kind of stocatto bop quality that punctuates the relatively understated movements. These segments are motion-and-sound duets / within which the two dancers contribute the motion. Sound is punctuated by motion — motion by sound.
Michael Schumacher’s sound mixes create various but coherent textures with the rest of the dancings.
The music is rousing — redolent of suspense / of mystery (and mysteries). 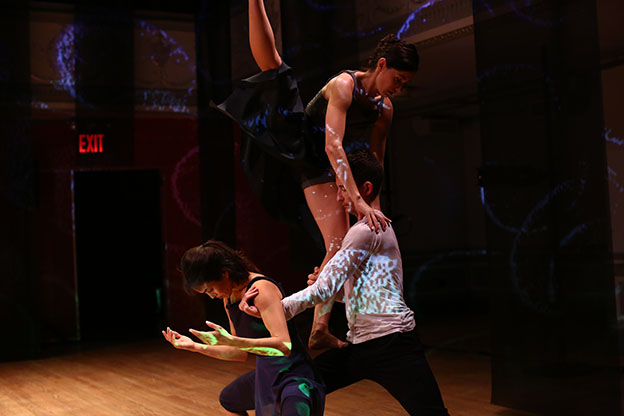 The music provides clues to snippets of narrative motion — not synchronized / so never heavy-handed.  The scraps of music / tease. The dance movements set the pace of the music — the music movements set the pace of the dance — but obliquely / intangibly.
The sounds are their own kind of screen — fragments of the silver screen / which echo the hanging screens that document the space / that make it documental. These dancings remember times.

Dance can be atonal — but not illiterate. 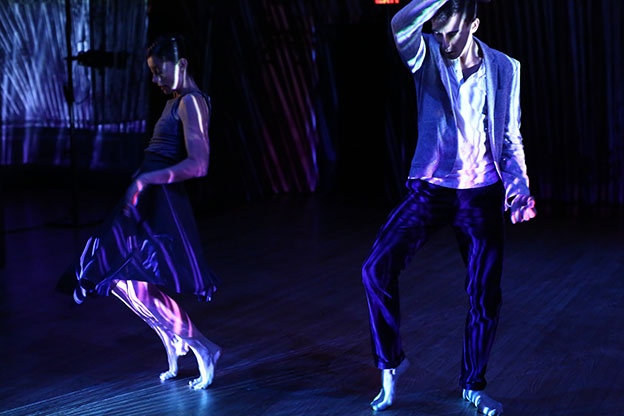 In motion there is stillness. In stillness / motion. If it were not for this / dance would not exist.

Dance is a species of life.

The movements of this dancing are often cinematic — motions / sequences of motions.
The dance tells bits of stories / vignettes — as often as not — these are moving.
Among those cinematic motions — someone helping a drunk walk / someone being made up for their starring role / lovers making out / vignettes from Hitchcock / from other of the classic films / reprises of dance movements from bygone eras (are we at Versailles?). There is an array of motions.

These movements are not only enhanced by the musical themes — they are infused with the sound.
There are strains of — perhaps Porgy and Bess / of other light opera / strains of Ives and/or other composers for whom content / some kind of reference / some narrative / was important. These strains are in the movements — they are / decidedly / American.

In the work as a whole there is humor / pathos / the elegiac and the sublime / the taxing and the (seemingly) effortless. This dancing provides explorations of grace / of humor / of longevity. Apart from a bit of fighting (there are no relationships without it) / the movements are everywhere polite / civilized — one might even say genteel.
There is no grappling or grasping for movements — the movements intuit the dancers. There is poise / and equipoise — but the unfailingly vigorous bodies remind us that this is animal poise — it communicates what animals communicate.

The larger ensembles divulge upon the duets – the duets arise from / next to / them. The solos are specific — precise / languorous and lovely / at once. The duets tend toward the sublime.
The narrative vignettes are balanced by the more precisely abstract movements.
Posture gets punctured — in movement(s). The dancers don’t just move together — they interact / interact — they are devoted to each other — everywhere varieties of together-action.
There is synergy of sequences of motions / with sequences of sound — together they inform / as form.
Here and there / the movements are even lighter than sound.
The dancers are mostly mute — and mostly move. Mimicry — that pedestal of communication — abounds. 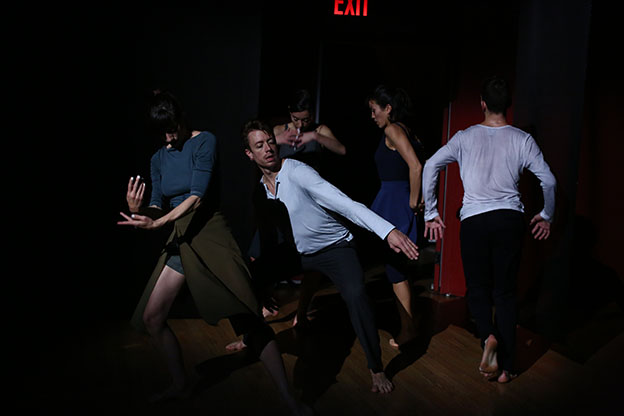 Throughout the totality/totalities of the dancings / actions rarely repeat — they multiply. We are continually being left with movements that we wish they would repeat. In that sense / the dancing never ends. 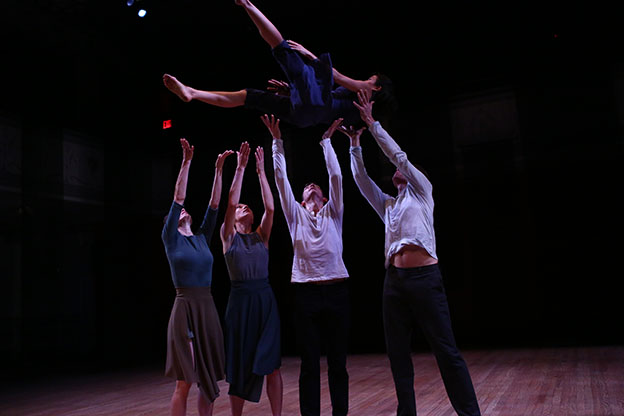 The work feels to be formed of the unusual stuff of dance / the unused.
The dancing is inhabited by a sort of triumphant sadness / one which it itself produces. This dance is the embodiment of feelings — more than merely the manifestation of longing / its instantiation.
In this largely elegiac and fragmented formulation / there is at the same time tremendous lyrical continuity. The dancers are so manifestly together / regardless of the particular grouping. There is no grappling or grasping for movements — the movements intuit the dancers.

In these ways / and by these means / the unsaying of the dance becomes impossible. The dancing is an ecologically sound structure — it re-nourishes / re-establishes itself as it proceeds. There is nothing left over / nothing has been thrown away — our memories are our own responsibility.

In the end / if there were an end / isn’t it all about seduction? / about mating?

I wonder how much better the dancers know each other at the end of the performance than they did at its beginning.

Because this piece ends in vigor / with particular vigor / it doesn’t end. 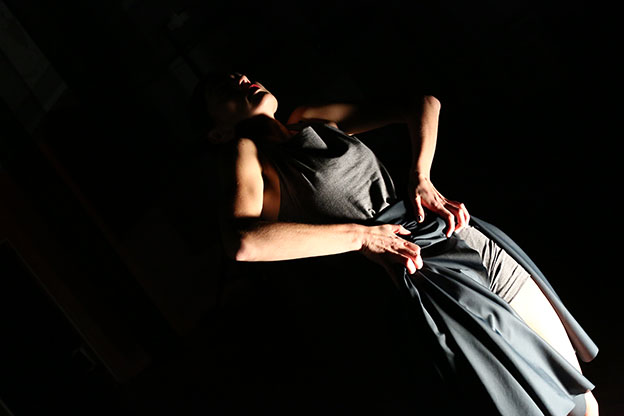