A review of Ed Steck's 'The Garden'

“To be between is to entirely flatten oneself in the encircling material.” The Garden by Ed Steck is between on several fronts. It’s between language as communication with people and language as binary code propelling computers. It is between data logs and codex. It is between the archetype of a garden (a space of paradise, innocence, and unspoiled beauty) and a virtual garden (a space defined by surveillance, a series of algorithms and geo-fence). The Garden loops and twists in search of the role of the self, subjectivity, humanness even, in a world structured by “information scaffolding.” It asks: what does it mean “to be here”?

In The Garden, what it means to be here has everything to do with self-awareness and embodiment in a material world overtaken by information gathering and data processing. Here, questions are developed out of overlap and repetition with variation. Experience too coheres in this way, yet a strong sense of fracture remains. In The Garden, the unit of experience is the sentence with few transitions smoothing the gaps between sentences. It’s difficult to excerpt, but to give a sense of the language and tone:

I am becoming self aware of the situation.

An anti-body is implementing a communication module in the last throes of its programming.

To introduce controlled chaos into a dynamically generated virtual perimeter’s systematic progression is advancement towards real-time deflation of an alien external system into an internal system.

An interaction’s slowness is an operation needing close lenience. It needs to be learned to struggle against what it is to forget, to learn the sudden slowness of memory, and its recognizable full decay. Sometimes rhythms introduce a face to conceal one’s own: a figure out of memory sleeps; muscles twitch replicating previous moments in known form. An arm ascends through layers to rest on either surrounding wall. This is a bodily formation of a memory. This image is not a fiction. Unknown people in skin with an ability deficiency to shape past middle voices. A discipline of self-information restrains this image.

I am self aware.

In contrast with the writer of Entry 7, the dynamically generated virtual perimeter (DGVP) is designed to be self-unaware. Human self-awareness is juxtaposed with the virtual system’s “self-monitoring,” which entails an extensive series of procedures, logging data in order to locate non-conformity and thus prevent breakdown of the system. Indeed, self-awareness produces a fatal error requiring a reboot of the system:

The all caps, lack of punctuation, objectivity, and jaggedness of the language are distinct from the series of entries, which includes entry 7 (cited above). Despite this, the identity of the author logging these entries remains obscured. When contrasted with the computer-generated message, the entries evidence the degree of conflict arising from one’s proximity to the system and being required to operate and act within the confines of that system.

At the center, “Motorcycle” presents a pixelated series of eight stills captured from what at first seems to be video surveillance footage. Positioned at the side of a shaded dirt pathway, the camera captures an image dominated by the patch of sunlight on the dirt wall and the dark shadows produced by the overhanging trees. 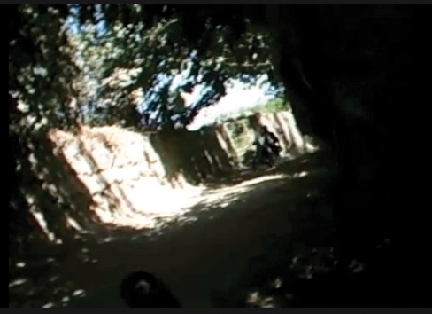 In the third still, a male figure on a motorcycle wearing a lavender-colored shirt comes into view, but in the fourth, the figure and the bike are entirely shadowed out. The silhouetted figure and bike are now aimed directly at the camera.

Upon close inspection, it seems as though the camera may have gradually crossed to the opposite side of the road in order to catch the motorcyclist as he rode past. It becomes apparent that what at first seemed to be security footage is actually video documenting a friend’s ride down the path. In the next two frames, speed and limited light increase the pixilation of the motorcyclist’s silhouette. 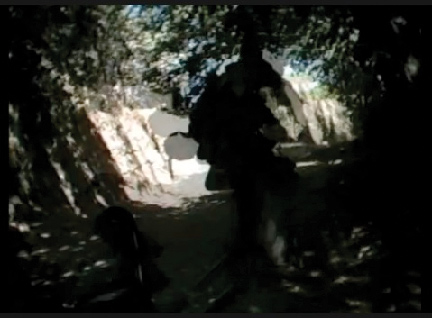 The camera turns to follow the course of the motorcycle, finishing the series of stills with two frames in which the figure is replaced by a cloud of dust. Foliage obscures the pathway. When the male figure riding the bike almost immediately becomes a silhouette, when the images are so pixelated, when presenting so few frames creates the effect of slow-motion video, and when the figure disappears in a cloud of dust with foliage taking over the frame, it is almost impossible to see anything but loss in this series of images.

Combine this sense of loss with the blocks of JPEG image-code facing the images and the repeated mention of “two men” and “soldiers” in the two bookending “Garden” sections before and after, and the situation becomes hauntingly clear.

The book seems to seep outward from the moment documented in “Motorcycle,” its touch expanding from within the garden to the garden’s perimeter. Like the series of system logs, memory loops and repeats, the document replays.

________ _________ DETAINED 2X PARTICIPANTS FOR MANNING A STRATEGIC ROUTE OUTSIDE OF CIVILIAN CURFEW LIMITS. THE STRATEGIC ROUTE WAS NEAR A COMPOUND MEMORANDUM OBSERVATION POST AND WEAPONS MANUFACTURER. THE TWO PARTICIPANTS WERE SPOTTED AS THEY ATTEMPTED TO FLEE THE SCENE AFTER DROPPING THEIR MOTORCYCLE, WEAPONS AND ATTEMPTING TO BLEND IN WITH THE LOCAL LANDSCAPE. THE 2X PARTICIPANTS WERE DISAPPEARED. FOUND ON THEIR BODY: A CASSETTE PLAYER WITH INSURGENT POEMS, TWO NOTEBOOKS, AND RESTRICTIVE MONETARY FUNDS SURPASSING FINANCIAL CURFEW.

TRANSMISSION CODE: I WAS LOOKING FOR A FRIEND A FRIEND IN BEHAVIOR AND IDEOLOGY IS ON THE BACKPORCH WAITING FOR US JUST
TO HAVE DINNER WE WERE IN THE GARDEN TRYING TO DISAPPEAR FROM THE SURROUNDINGS

The document shifts as the voice is transferred from one person to another and from a person to a computational system. It shifts under the recurring title of pieces in “The Garden” sections (The Garden // I’m always a place that I don’t know), as the words making up the pieces change and the title remains the same. The shift happens within the strictures of a formal constraint: a series of five paragraphs, each five lines long. For one piece in each of “The Garden” sections, the width of the paragraphs shrinks, becoming so narrow that the justification pulls the spaces between words into large, noticeable gaps. These gaps are compounded by the “stanza” break that is inserted between each sentence. These pieces add to the spaces indicated in the piece at the beginning of “The Garden,” “DGVP* to RSAM”:

In my present position, there is an available space.

Facing an image of static waves (possibly a grayscale scan of a hologram), this piece points to the space of the page, the distance between an acronym and the words it abbreviates, what comes between two threads of meaning (as in the need for an appendix), as well as the space between the asterisk and its footnote. If the system of the virtual perimeter loops, constantly extending, reiterating and rehashing data, the counter-measure to this seems to be wedging a space into the data. 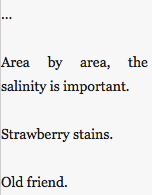 This wedging of space seems analogous to the tipping of a hologram, upon which the changing light causes the image to become something else. After reading The Garden, I can’t help seeing text as another type of hologram, which shifts as it is read. I also can’t help thinking of The Garden as a space wedged, stretching the dynamically generated virtual perimeter of written texts (what is and is not written, published). The final section of the book, “The Hologram,” is made up of a series of blocks, some of which are justified text, while others are images of static (as mentioned before, these are likely reproductions of a hologram). As does space in the previously quoted passage, here the blocks are layered on top of one another and suggest the possibility of shuffling.

The Garden presents a disturbing and haunting space of loss. The richness and complexity with which it engages current human experience is nothing short of brilliance. Rather than resorting to answers, The Garden offers a sustained brush with being here. In remaining between, it does not allow itself the luxury of escaping unscathed.

To be between
Intersecting: Sound and poetry
Typological inquiries