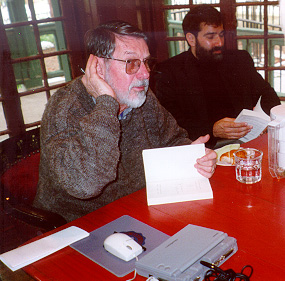 Through the agency of my terrific wife, I sent an article, I think it was called “Bush Goes Green” from the New York Times, to this listserv that a friend of ours sends us — you know, Barbie dolls and things women have to do to protect themselves in parking lots, lots of actually useful information, but the list has had a certain smugness. So, I zapped out this Bush article — Texas is fiftieth in education, and so on — and instantly comes back a letter: “Don’t send any more of this to me. I’ll vote for Bush no matter what.”

So, I was disappointed that one would vote for someone who commits to have his state have 25 percent of its population with no insurance, who would willfully do so, and fight to preserve that situation. I still feel anger in that way.

But again, back to the verse. Think of the classic phrases humans make: X wants to make his peace with the world. The resistances of Lawrence’s, the day of my interference is done, the recoil outstrips the advance, et cetera.

I remember one time, terrifically, I had the chance to ask Kenneth Burke at a community meal we were all at up in Orono, there was a moment when I had him to myself, so to speak, and I asked him quickly: What advice would you have for someone as myself who is getting old? And he looked at me and said: Don’t boast. You won’t be able to back it up.

Therefore, it isn’t, don’t get angry, don’t use anger as a primary emotion. It’s extraordinarily hard to sustain. It always was incidentally.

Creeley as a Writers House Fellow
Creeley on PennSound

Audio recording of Creeley as a Writers House Fellow

Explode for small change (PoemTalk #104)
Carl Rakosi: Audio recordings at U Penn
Believing in the World Because it is Impossible
Robert Creeley at Kelly Writers House, 2000
Flipped poetics and the resources (such as they are) of the academy
Recordings of poetry: Technologies, pedagogies, institutional politics
Marjorie Perloff: A celebration
The unprepared future of an exophonic refugee
The seeds of its own unfolding
I am suddenly aware that phrases happen
Just begun to learn: PoemTalk on Louis Zukofsky's 'Anew'
Jerome Rothenberg at Kelly Writers House, April 29, 2008
Jerome Rothenberg: The real revolution is tragic
Stanley Burnshaw
Stanley Burnshaw comes to PennSound
Introduction to the poetry and poetics of 1960
Poetry in 1960, a symposium: Question and answer session
Poetry in 1960, a symposium
Asking Creeley about Williams

Someone's got to keep this generation honest

The Golden Dot: Last Poems, 1997–2000 (Lithic Press, 2022) is a white-hot summation and extended last word of a poet who was most alone in the company of others and frequently his own worst advocate. The Shelley-infused lyricist, familiar to us from more than a dozen books across forty years, is still in evidence, but there is a newfound clarity and urgency to the work, which is like meeting a long-lost friend after decades apart.

Note: The youngest foundational Beat is having a revival. After a folio of new poems appeared a few months ago in The Brooklyn Rail, the full collection from which they were excerpted has arrived, and it couldn’t be more of a surprise — and a delight.

'And whoever picks it up grabs the magic'

Will Alexander on Close Listening, October 19, 2016

Editorial note: Charles Bernstein and Will Alexander had a conversation about Alexander’s work for Clocktower Radio’s Close Listening at PennSound’s Carroll Garden Studios in Brooklyn, New York, on October 19, 2016. Some of the topics they touched on include: Alexander’s works, philosophy, connections and citations and references and sources, mythology, genre, aural properties of writing and performance, jazz, drawing and sketching, identity and politics of writing, location, and the writer’s mindset.

October 20, 2022
The delight of this work
Women of color celebrate second books
Gabrielle Civil
Violent holidays in Russia
An interview with Kirill Medvedev
Kirill Medvedev
'Poetry is in the world'
Gillian Conoley and Christy Davids in conversation
Gillian Conoley
Zoning in, zoning out
A trialogue
Edgar Garcia
Dots in the distance
A dialogue with Mark Francis Johnson
Mark Francis Johnson
The longer short of it
An interview with Hiroaki Sato
Hiroaki Sato
Jocelyn Saidenberg and Eric Sneathen
A conversation
Eric Sneathen
Afrizal Malna in conversation with Daniel Owen