Over a career stretching more than four decades, Canadian poet Phil Hall has become known as the “poet’s poet,” more widely known and appreciated only during the past half-decade or so. Somehow, in the course of a conversation with poet and Wilfrid Laurier University Press Director, Brian Henderson, it followed that I would be editing a selection of thirty-eight of Hall’s poems for a “selected poems” as part of their Laurier Poetry Series. This press has produced two dozen titles of selected poems by Canadian poets, each guest-edited, and has established itself with an impressive series, predominantly aimed toward university and college courses, and the possibility of a new readership for established Canadian poets. Authors in the series include Fred Wah (ed. Louis Cabri), Nicole Brossard (ed. Louise H. Forsyth), derek beaulieu (ed. Kit Dobson), Christopher Dewdney (ed. Karl Jirgens), Dennis Cooley (ed. Nicole Markotić), Di Brandt (ed. Tanis MacDonald), Daphne Marlatt (ed. Susan Knutson) and Steve McCaffery (ed. Darren Wershler). 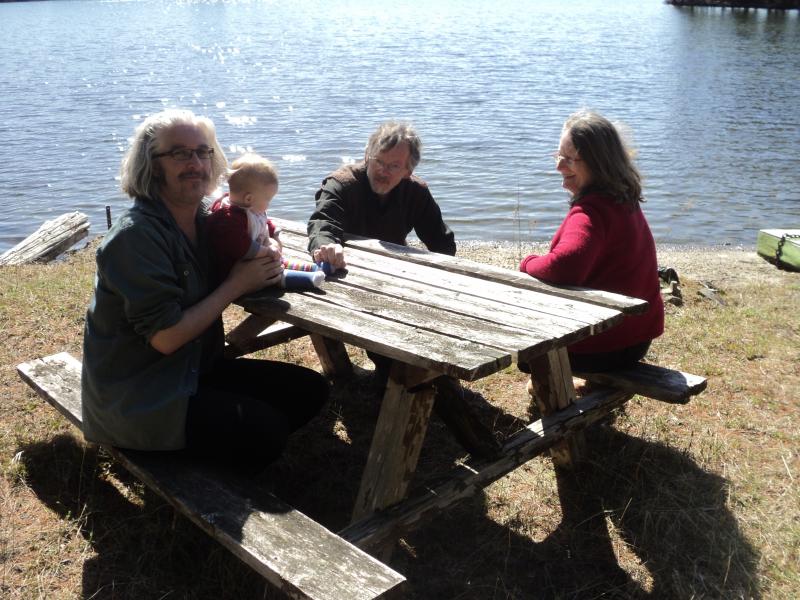 In May 2014, Christine and I drove baby Rose the hour or so west of Ottawa to spend part of a day with Phil Hall and Ann Silversides, in their cabin just outside of Perth, Ontario. We were making our way out for the purpose of opening the conversation of how to approach the selected poems, although we suspected the real purpose was for them to meet our wee babe. After much interaction with Rose (then seven months old), Hall and I decided on a collaborative approach: we would submit lists of suggestions to each other, and work from there, with Hall deciding that he would revisit the poems. Once home, I pulled out my stack of Phil Hall titles and dove in, seeking the poems that stuck in the head or otherwise leapt out to add to my list of suggestions. Given the fragmentary nature of many of his book-length works, how else might one approach such a selection? I ignored thematic or any other structure but for those pieces that, even after some twenty years of engaging his poetry, struck an immediate chord. My list was one of pieces I couldn’t pass by, fully aware of how completely arbitrary my selection (and selection process) might have been. I submitted my list to Phil, and received his, in return. After a few backs and forths, the poems that make up the selection of A Selected Sequence have been worked, re-worked and re-ordered by the author from over a dozen publications, carefully and thoughtfully stitched together by a master craftsman.

Unlike poets such as Al Purdy or George Bowering, Phil Hall’s work makes it impossible to excise any obvious series or sequence of “greatest hits”—ie: poems that readers already know and love re-packaged for the general reader out of his numerous books and chapbooks; instead, what becomes compelling about Hall’s work is in just how many permutations of this volume might have been possible, as well as the remarkable durability of his writing. He writes on influences, literary and otherwise; he writes of rural Ontario, and such terrible violence even -as he processes such; he stitches together lines and tall tales and fables from his life and the stories that float around the ethos of his variety of Ontario wilds. Hall’s isn’t a poetry carved into perfect diamond form, but a poetry whittled from scores of found material to be pulled apart and rearranged.

Some might argue that Hall’s decision to rewrite poems for the sake of a “selected” alter the entire process of putting together a selected poems, which I would completely agree with. Given the shifts in the book industry over the past decade or three, one might counter with the fact that some of Hall’s books are more available now than they might have been when they first appeared. Is the idea of the “selected” one of a sampling or “best-of,” or an opportunity for all of the above, along with the possibility of an entirely new work?

Phil Hall has long been a poet of deep attention, compiling and collecting lines and phrases into an accumulation that speak of artifacts and smallness, and a humanity rarely lived and articulated so well in Canadian poetry. His is a folk-art, sketching out a collage of lines, phrases and lost sentences. Stan Dragland, in his new collection of essays, The Bricoleur and his Sentences (Pedlar, 2014), refers to Hall as “the bricoleur’s bricoleur,” for creating his works out of the strands and shards of what is available. Hall won the Governor General’s Award for Poetry and the Trillium Award, as well as being shortlisted for the Griffin Prize, for Killdeer (BookThug, 2011), a collection of self-described “essay-poems,” published as part of BookThug’s “Department of Critical Thought.” Hall’s early works included elements of work poetry, but he has morphed into a folk-poet, composing what have evolved into “essay-poems.” He practices a folk-local, examining the small, local and deeply specific, composing striking lines and phrases that accumulate into individual pieces, as well as sections of a far-broader canvas. Hall’s poems have the durability and devastation of koans. Somehow, his lines manage to self-contain in such a way that even a shift in the order might still make the A Selected Sequence no less capable, breathtaking and wise, even as a reader familiar with his work might recognize a line, or even a fragment, from an earlier work. He opens A Selected Sequence with a line from the poem “Plum Hollow,” borrowed from The Small Nouns Crying Faith (BookThug, 2013), and follows with a re-worked version of an early poem, “Bluegrass”:

each step he takes     makes the earth boom

Compare that second piece to its earlier incarnation, from Homes (Black Moss Press, 1979):

A man walks through half of the sun
over fallow land toward warm windows
Each step he takes makes the earth boom
its guttural yodel in the old air.

Around him and outward in widening circles
animals scatter at breakneck and breakdown speed.
Their spasms of flight and of running
make the sound of hectic tin plinks.

In the warm house a woman is red on one side
brown as bread on the other as her thoughts strum
over the fireplace and the humming children
over the vibrating blood of her husband’s kill.

Near the garden the graves of their parents
lean together like a barbershop quartet
and the wind in the rotting tops of the carrots
releases their hopes in a lonely scraping of strings.