WINDFALL is grrrrlhood. Bone of hair braided over and under the root system. That felled lock rocking its origin grew there without me. To go back is to fume quietly into the air, sound stolen by the gale-force spurred into lung. Of scent there is only chlorophyll (buds of a lost mitten, bathed organelles). It wakes like growth spurt. Bodes no futility, green verging on blue. I’m stippled with sense: voluble and inchoate. Not triste, no, but fire-breathing. Pit of the mouth scorched open, innards systemic with coal.

As she admitted recently, the manuscript deadline was not only one she used to force her to complete the project, but became her first poetry submission of any sort. In her “12 or 20 questions” interview, she discusses the chapbook and her math-translations, writing: “The chapbook itself was an opportunity to play. When I wrote it, my goal was to have fun and try a few things I hadn’t done before. So ‘translating’ the math-like poems, for instance, was born of my wish to experiment with an irreverent, figural engagement with science, converting the rules of math into the puns, slippages and gamesmanship of language.” Published the same year, her three poems in the spring 2014 issue of EVENT magazine (43/1, May 2014) was her first publication in a literary magazine.

An editor, reviewer and arts journalist, she completed her PhD at the University of Calgary, and currently serves as President of the Board of filling Station, Calgary’s experimental literary and arts magazine. Unbeknownst to those around her, she had been writing quietly for years, tossing out more work than most might publish throughout a lifetime, something she shares with Canadian expat Suzanne Buffam. Buffam deflected book publication for years, even after her CBC Literary Award for Poetry in 1998, before the publication of her first volume, Past Imperfect (Anansi, 2005). It was also said that while his peers published a variety of works around him, the late poet John Newlove waited to publish, emerging “fully formed” in Vancouver in the early 1960s.

Beautifully designed and produced, Grrrrlhood: a ludic suite, according to the colophon was “hand-set in Monotype Bembo with Centaur for display, then proofed, corrected, printed, folded, collated and bound in ‘The Bunker,’ Okanagan College’s letterpress print shop, by students of the Diploma in Writing & Publishing, 2014.” The list of the “Bunker crew” is listed as well, making quite a nice touch, and includes Jason Dewinetz, who is also editor, publisher and printer of Greenboathouse Press, one of the finest literary letterpress publishers/printers in the country.

What strikes about Sheppy’s Grrrrlhood: a ludic suite is the brashness of her text, a daring series of forceful, bold and playful engagements with expectations of language, sound and the notion of “grrrrlhood,” portions of which are reminiscent of some of the electric lyrics of poets Emily Carr, Christine McNair, Brecken Hancock and Sandra Ridley. As Sheppy opens the first poem, “GRRRRL”: “(n.) a style of primitive ape, sub-adult and / female, in ringlets and pluck, about to slip / her tongue into you without first seeking / permission [.]” Sheppy also manages to play with the language and concepts of mathematics, making some of her titles impossible to replicate in a form such as this. Grrrrlhood: a ludic suite is a smart and powerful mix of lyric extraction, mathematical formulae, angry questioning and Riot Grrl bravado, wrapped up in a striking accumulative suite of poems. As she speaks of her current project in an interview recently posted at Touch the Donkey:

In Grrrrlhood, I included a series of mathematical formulae in which words replaced numbers. Following each equation, I wrote a poem that deliberately mistranslated the math in ways that undermined the literal, discipline-specific concepts by forcing them into an emotional and psychological field. For example, if mathematically, the root of a quantity might be expressed as that quantity raised to the power of a fraction, I used this idea to contemplate the origins of thwarted power.

Similarly, the project I’m working on now deliberately breaks faith with classical mythology to interrogate power. It rewrites the myth in order to rewire gender and to challenge male-dominated canonicity as a productive literary mode, by revising or resignifying the narrative, the better to express the repressed story of Eurydice. In Ovid and Virgil, Eurydice dies in order to provide a story for Orpheus (who must mourn her in the beautiful song that helps found the canon) and a story for Aristaeus (who must make amends for his role in her death if he is to save his bees). Aristaeus is a sexual predator and small-time feudal lord, whose affluence is realized through the labour of bees, but the myth curiously connects his intention to rape Eurydice with the curse of poverty. Her assault thus refuses to go unmourned. By investing Eurydice’s story with its own coherence and significance, in the wake of other feminist writers, I hope to explore women’s trauma narratives on their own terms, as well as in cultural context. These narratives are often used in problematic ways: to assert that a ‘damaged’ woman has no power, or to convert her story into the dilemma from which she might be rescued by a male actor or used by him for the production of opportunity or capital. My project strives to relieve Eurydice of the role of perpetually embodying loss, and liberate Orpheus from the task of endlessly grieving female powerlessness and his own complicity in it.

This may seem idealistic, given the persistence of gender inequities, but it responds to the symbolic possibilities of mythology, rather than its literal content. I view this myth as an object lesson in emancipation from the archetypal traps of narrative itself: of a gendered narrative fate, if you will. Myths often safeguard criticism, and secrete transformational potential. By looking back, Orpheus agrees that Eurydice will free herself: acknowledges that only she can do so. Indeed, this may be a truth encrypted in the myth. What happens next, in the Underworld (a kind of un-language lab), is Eurydice’s story. 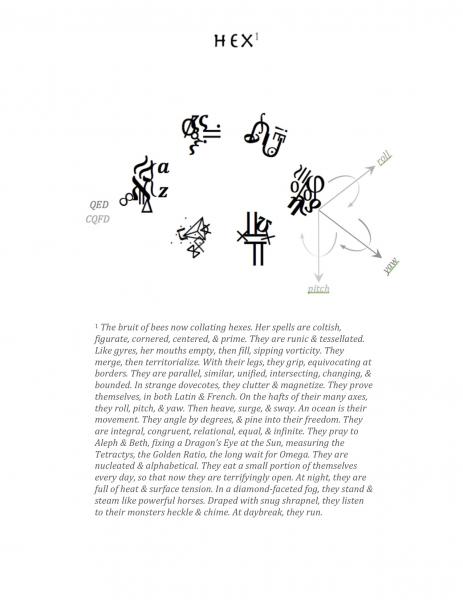 from words for use in hell