A poetics of proximity

What is poetic research? What formal practices make adequate response to empire’s calculated proximities and tactical gaps? These research notes emerged from one month of archival and ambulatory investigations in El Paso, TX, in November to December 2021.

What does it mean for this avenue to be one line between military fort and migrant detention? For Atlantic Aviation offices, subcontractors of ICE for deportation flights, to be located off Boeing adjacent to the NASA shuttle take-off? How to make sense of one fence away? How to read this touch? Attempting to account for nearness, for overlaying and occlusion, I sought a field with a methodology of proximity, a technology for processing prepositions. 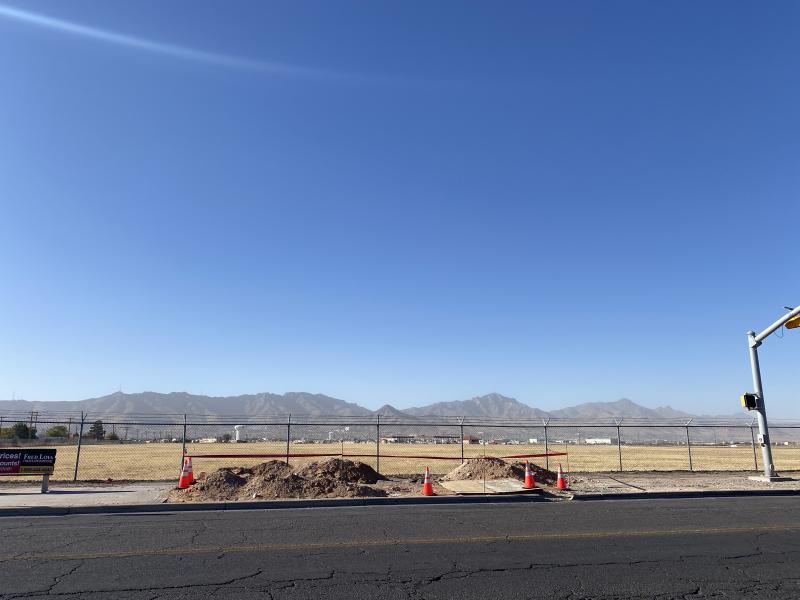 Solmaz Sharif reflects that a poem creates “a heightened sense of proximity to things that we otherwise see as totally distant and removed from ourselves and our reality at the moment.” Citing Gwendolyn Brooks’s description of poetry as “Life Distilled,” the poem becomes a compression, a space of gaps closed up. I weighed this line against the heightening of flight, the compression of air, the sensation of the immanent proximate in aviation: the plane’s closed gaps. As I attempted to write one square mile in El Paso, I asked: what might the airport have to say to the poet, as tangible space of altered nearness, along with that residue — sounds behind sounds?

Seamstresses at the Radioplane factory in southern El Paso sewed parachutes for Project Mercury to make gentle man’s reentry onto Earth after the Apollo moon landing. Every stitch was examined; touch of the orange and white nylon parachute and needle-print sent to space in manufacture of drag. The El Paso Airport runway is a training site for shuttle landings with only one chance for reentry; the angle of reentry eludes a stone-skip across the atmosphere’s lip, the capsule jettisoning every part but the bodies’ shell for the deorbit burn, then the drag. Across one fence is the immigration detention center: orange and white cloth suits mark attempts at reentry, the long drag of detention descent, criminalization of multiple attempts, while MPP surface tension skips at the fence.

The sensation of proximity from a height across distance is imperial vision, and likewise the sensation of vast distance in the face of the immanent: the slats in the fence. Walter Johnson makes a historical accounting for rapid transit abutting the detention center fence in a Cotton Empire context, marking “transportation” as “a form of spatial discipline — of incarceration.” The most advanced technologies, commercial instruments, and tools of statecraft were dedicated to “reduce the friction of travel across space.”[1] Close, enclose — etymologically — subsume such processes of having the gaps shut.

Of proximity in space, time, form or state.
The primary notion is that of havinginterveningspaceorspacesclosedup, whereby
the parts are in           immediatecontactwith
each other or near each other

As near as can be, very near.

or with verbs of motion, as
come
bring

To shut up in a building; to seclude, imprison,
to restrict movement
to encompass
shut up
to come to an end

To stop up (an opening or channel) so that it ceased
to be open or to allow of passage. Where the opening is provided
with a gate, door or lid, turning on hinges or sliding,
to close the opening.

The calculated closure embedded in the rapid; the stopping up of gaps as exercise of power. “I see all formal practices as a mimicking of a kind of power,” Sharif continues. The power sprawls in these proximities and their im/mobilities; how to arrive to a formal practice adequate of response?

I became curious about looking for the proximities in the landscape that defied attempt and calculation; the closures and gaps surplus to development’s intent: sidewalk scree, cut stump, and phantom limb-branch, dead cat jaw-aperture outside Border Patrol Training Facility to survey the enjambed gap, plywood tap and neon spray-mark, empty pill case mold tossed, electric pole allow-for-sag gap. The detention center falls continuously through the crevasse of the zoning map’s margins, overlapping edge splotch, and from the aerial survey this whole site is gap.

El Paso is a tactile crease in the fold: smudged by fingers pointing “here,” the breach of faulted strata in the Franklin Mountain range sloughing into valley. Celina Su considers the distortions of continents’ relative sizes in the Mercantor projection and the distortions of continents’ relative shapes of the Gall-Peters projection, instead seeking forms to eschew authority’s objective framing and representation. In response to the instrumentalization of proximity and distance in projection, “Poetry is an unflattening.” I imagine crumpled map leaves in a pocket, the parabolas of flight tracker grasshopping between voids that now rub cheeks. The pressed collarbones of opposite ends in the rushed fold.

In conversation, Su referenced M. NourbeSe Philip’s Zong! as formal unflattening, responding to violences of calculated proximities by arriving at proximities differently. Addressing the “transportation” technologies of enslavement, including insurance as mechanism of commerce and statecraft, M. NourbeSe Philip precisely affronts those tools that “reduce the friction of travel across space” by uncalculating frictions and proximities:

Words rearrange themselves in odd and bizarre combinations: at times the result appears the verbal equivalent of the African American dance style “crumping,” in which the body is contorted and twisted into intense positions and meanings that often appear beyond human comprehension ... The stories on board the Zong that comprise Zong! are jammed together — “crumped”— so that the ordering of grammar, the ordering that is the impulse of empire is subverted.[2]

The procedures of both inscription and oration in Zong! become means of investigation of what emerges in disordered proximities. “Words are broken into and open” in the process. If poetry could be a medium for investigation and alteration of proximities, what was poetry’s research?

Angling my own tack into untangling this space in El Paso, I asked Celina Su: Is poetry only an output? Is it a diversion of academic research surplus into odder shape, a rehash and splice-paste? Or is poetic research itself a space where expertise can be aspired? If expertise is a colonial fiction of reified knowledge, what ways of knowing belong to the poet, what ways of coming towards that knowing? I had encountered claims of the “amateur” in poets coming close to their spaces: Kaia Sand's “Inexpert, I / notice with the attention / and drifting inattention / of poetry,” JD Pluecker’s discussion of the “amateur” in a study of wasteland. The “amateur” described an orientation to subject that was close but not encompassed, seeming to offer its own angles and reaches. But it also risked skipping out on owning the poet’s singular tack, perhaps intentionally. Celina Su invoked amateur’s etymology (from French, Latin): one who loves. Also, one who participates without “an eye to gain.” This unhungry gaze seemed like a more generative starting point: it marked a quality of attention. Zong!’s legal and insurance sources were an example of documents that kept an eye fixed on gain, expecting and preceding gain. To “dwell in the snags” as a means to shift what gaps and ends, I aimed at an ungainly eye. An ungainly eye easily tripping, clambering and uncouth, coming by foot and gaining no altitude in a land where the moon shuttle is outside the window of the immigration detention center.

Entering the University of Texas at El Paso Special Collections on the library’s sixth floor, I arrived with questions of geographical proximity pertaining to one square mile in eastern El Paso. Perhaps training to see architectures of disappearance was really a training in prepositions: beside, behind, instead of. The proximate as at once the proxy, abutting in time but replacing in si(gh)te. Delayed a day by what became a false shooter alert, time was present and compressed: how to approach the archive for poetic research within the constrictions of circumstance and at once without an eye to gain? 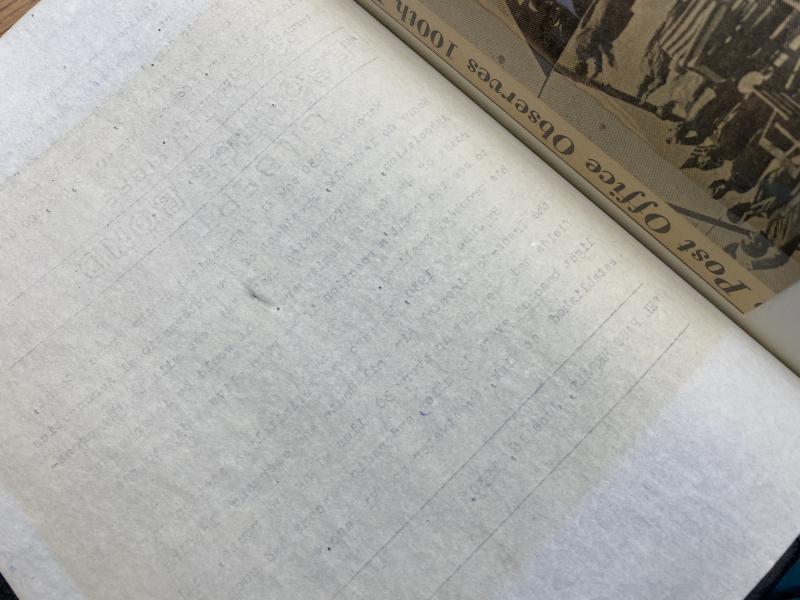 The archive is a site to pitch, make quest of the seat slump and hunch over the text’s gestures. I leafed a typewritten, 1952 volume on A History of El Paso International Airport by Raymon Patton. Lifting the page, the fluorescent light passed through, the paper one-hundred-percent-cotton-fiber embossed “Bond Resource” — cotton rag fiber still composing the bond. Opposite one folding, a newspaper clipping pasted — “Post Office Observes 100th year.” The Post clipping’s edge shadowed its yellow stain against the Bond. This stain was subsequent to many iterations of the touching of these words Post and Bond in this project, iterations of ungainly attention whose gatherings then gleaned the incidental. The yellowed lignin oxidation was the exposure of what binds cellulose upright. Poetic research, I began to see, is some recognition of the marks, residues, and shadows left by proximities.