A review of Matt Miller's 'Collage of Myself'

The image on the cover of Matt Miller’s new book, Collage of Myself: Walt Whitman and the Making of Leaves of Grass, will look especially familiar to anyone who has googled the good gray poet in the past few years. While the William J. Linton engraving of Walt Whitman, itself based on a photograph by George C. Potter, first appeared within the poet's published work in 1875, the last place many of you may have seen this “rough-cut mask” was on the homepage of the Walt Whitman Archive, an electronic teaching and research tool that makes Whitman’s work — from his earliest extant manuscripts up through the so-called “deathbed” edition of Leaves of Grass — available free online. 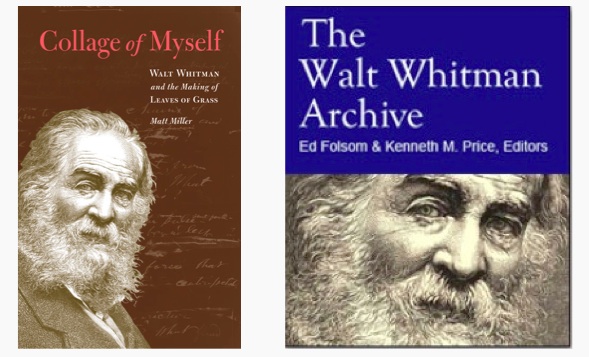 As a graduate student at the University of Iowa and now as an assistant professor at Yeshiva University, Miller has worked extensively with the Archive, most notably on the transcription, encoding, and dating of Whitman’s earliest notebooks. In ways far more significant than the book’s cover, Collage of Myself — the first full-length study of Whitman’s innovative compositional practice, a collage-like process that Miller establishes as a predecessor to the visual art of Picasso and Braque — is an homage to the Archive and a testament to the promise of digital research in the humanities. Utilizing manuscript material now easily accessible through the Archive — notebooks, drafts, and prose fragments that in the past scholars would have had to travel around the United States to see — Miller has produced a thoughtful examination of Whitman’s theory and practice of collage first developed in and through the poet’s writing shortly before the publication of Leaves of Grass in 1855.

By turning to Whitman’s own notebooks — the most reliable documentation of the poet’s process — for an understanding of how Whitman sprang, seemingly full-grown, onto the poetry scene in 1855, Miller’s book stands as a significant departure from earlier studies that have strained to explain Whitman’s sudden discovery of a signature verse style. In this sense, Miller’s turn inward towards the manuscripts is refreshing and provocative. And it’s through this methodology that he is able to reconstruct for us the collaging Whitman: a poet whose theory of language enabled him to appropriate the writing of others and incorporate it into his own; a poet who also almost compulsively cannibalized his own writing, “packing and unpacking” words, phrases, and even whole lines as he moved closer and closer to the mature style recognizable in poems like (the one eventually titled) “Song of Myself.” For Miller, the evidence of a procedural, collage poetics found in Whitman’s notebooks is a direct extension of the poet’s philosophy of language, a performance of the poet’s approach to “all writing that he both found and wrote.” According to Miller, Whitman:

extracted phrases and lines that attracted him, and in the process of moving them from their initial sources into new contexts, he filtered and changed their tone and meaning. His appropriation of found text is not a weakness or a disguise; it is something essential to his writing process and reflective of his lifelong involvement with language: as a newspaper writer, a typesetter, an editor, a layman scholar and linguist, and a nomadic young poet who wrote while on the move.

Miller offers several examples of the “radical portability” legible in Whitman’s earliest manuscripts, demonstrating how Whitman “saw the language of his drafts not as a series of interlocking units in an implacable architecture, but as blocks of text to be toyed with, cut and pasted (sometimes literally so) into ever new shapes and forms.” For those hooked on Whitman the Romantic, a bard of divine inspiration and ecstatic revelation whose Leaves of Grass begs to be read in the open air, Miller’s Whitman the Modern will come as a much needed shock. But even if you are reluctant to let go of that caricature of the poet you love (or just as likely hate — he does contain multitudes), Collage of Myself will remain a fundamental gateway to our understanding of Whitman’s proto-modernist poetic project. 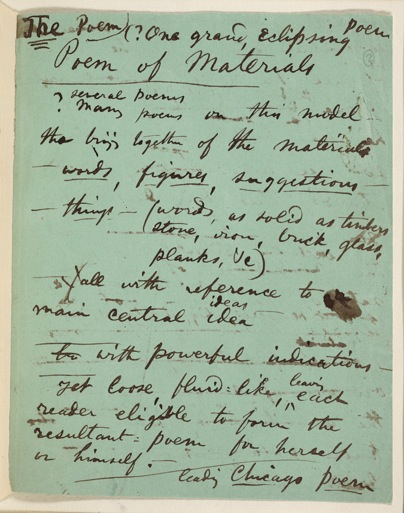 Whitman’s theory of the “poem of materials” (from an original manuscript).

As the characterization of “text” as “blocks” above may suggest, the Whitman that emerges from Collage of Myself is a poet highly attentive to the materiality of language. In his book’s most illuminating chapter, Miller demonstrates how Whitman, approaching language “as something that [preceded] his own creativity, as opposed to originating within himself and flaring up in inspired burst,” continually explored “the material nature of words on the page and the idea of words as materials, the building blocks … of both poems and people.” Whitman’s concept of a “Poem of Materials” — a phrase Miller picks up on from a manuscript in the Trent Collection at Duke University, available on the Archive as well as pictured here — is brought to life through an extended and subtle reading of “Song of the Broad-Axe.” For Miller, Whitman offers readers of “Broad-Axe” “two kinds of poetically reimagined materials — language and the productions of the axe … at the same time [stressing] the material nature of his art.”

But for all we gain from Collage’s turn inward towards Whitman’s writing process, some will be left looking for more comparative context, if not in the form of an overview of popular proto-collage practice during the mid-nineteenth century, at least through a glimpse at manuscript evidence demonstrating the essential differences between Whitman’s writing process and the compositional practices of his literary contemporaries. In one sense, Miller anticipates this critique; acknowledging the role the Archive played in the maturation of his project, he gestures, at least implicitly, toward the current impossibility of a comparable study of a writer like Martin Farquhar Tupper, or, even more surprisingly, Ralph Waldo Emerson. Miller provides the obligatory discussion of both Emerson and Tupper, two writers contemporaries often associated with Whitman, but nowhere are we given access to their manuscripts as we are to Whitman’s. Even a cursory look at Emerson’s or Tupper’s writing process might be enough to assuage any lingering doubt concerning the true originality of Whitman’s poetic and procedural breakthrough leading up to Leaves of Grass. Perhaps that’s the greatest gauntlet thrown by Collage of Myself: through his example, Miller calls for the creation of large, free, public archives that will enable, not necessarily challenges to his work, but the depth of scholarly engagement, the near total manuscript immersion Collage is able to achieve. For anyone who has spent time digging through Whitman’s manuscripts, digital or otherwise, you are often left wondering just how idiosyncratic Whitman’s tendencies are. Questions spring up ranging from those central to our appreciation of Whitman’s place in literary history — how are other writers “packing and unpacking” their manuscript lines? — to the more banal — could Whitman possibly be alone in drawing these little pointing hands everywhere? Those questions remain beyond the scope of Miller’s project; however, the strength of Collage of Myself lies in its astounding depth, even if at times we are left searching for a broader manuscript context. Collage of Myself thus invites us to create that context, calling poets, scholars, and those at the forefront of the digital humanities to facilitate this level of critical inquiry for a new generation of readers. In this challenge to the future of literary studies, Collage of Myself is worthy of its subject, Walt Whitman, a poet “hungry for equals night and day.”