A review of 'Portrait of Colon Dash Parenthesis'

The whole world broods upon one answer.
Every living being mulls over the response.
Resting his weight on one foot
By keeping that leg straight for now, while
Slightly bending the other knee (9)

To open a book of poetry by placing the “whole world” in a subject position would seem as the most unfortunate of all possible beginnings. And, to be sure, there are many beginnings out there from which to choose. Such a choice portends just the opposite of what John Ashbery and David Shapiro call, in their blurbs of Portrait, Jullich’s “precision.” After all, one could neither begin less precisely, nor make a less decisive choice of how to begin. The “whole world” is not really a choice at all, but a delay. The opening subject holds in suspense, puts “on tenterhooks,” the matter of whether the book is to begin at all.

It is in just this way that Jullich “speaks out” (ek-phrases) from Michelangelo’s David, whose contrapposto posture he proceeds to describe (“Resting his weight on one foot”). This marble statue, as we well know, suspends the young man who would be king at the very, just the very, moment of decision: he will step toward Goliath. His first step is always just about to be: as Jullich writes in a later poem, “constantly, always ‘about to’ — about to occur” (22). David’s choice is made, but he has not begun. And so Jullich commences his precision, in a book whose language is as rooted as it is fleeting, with “bated breath” even as it is in the movement of speaking.

If Jullich’s Portrait should be called precise in its diction, its precision lies in its continuous redundancy. The tautology of the book’s opening two lines are, for a third time, recapitulated two stanzas later: “There’s no one who doesn’t ponder that antiphon” (9). This technique of rephrasing runs through the entirety of the book, inverting the poet’s range of selection into a progression down the page. At times, the reader will need to wait for pages to reach a line’s antiphon, as with the description of David given in the second stanza of “Tenterhooks”:

His hips and legs are turned
In a different direction from that of
His shoulders and head. (9)

These lines are then called back to twenty pages later in “Chi con la vista ancide I circustanti”:

The horizon line of his pelvis is
Angled against the sum of his collarbone. (30)

By presenting the range of selection from which he has to choose and refusing to make that selection, Jullich reformulates precision as excess. In this excessive diction, Jullich alludes to the tautological praises of the Davidic psalms, as in Psalm 117:

Praise the Lord, all you nations!
Give Glory, all you peoples!
The Lord’s love for us is strong;
The Lord is faithful forever. 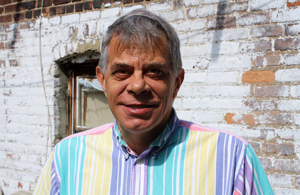 Here David’s redundancy constitutes an offering of the excessive expenditure of his speech, wherein voice becomes the poet’s sacrifice (“let my prayer be like incense”); it also exemplifies that gratuitous naming which is to be found around any object of affection. When Jullich takes the marbled David as his object, he erects his redundancies as columns, surrounding the artificial body in a verbal “loggia” (“In Florence they would build an entire / loggia around him, if he were made of marble”). In so doing, he demonstrates the necessity of the artificial, the denaturalized, and the “masked” as the basis of discourse as well as desire.

The redundancy of the human body marks a central concern in Jullich’s Portrait. And whereas sculpture can present in art a one-to-one relationship to the human body, this human body will always appear in poetry as a circumlocution. Jullich powerfully captures the tension wherein the body will at once be poetry’s origin and its secret. Jullich’s preoccupation with the articulations of the body, both in terms of its anatomy and its movement, courts an object whose arrival is as necessary as it is impossible. In “Terpischore,” titled after the muse of lyric poetry and dancing, Jullich obsessively phrases the contours of the “kinetic” human foot as though, with enough words, a real foot may alchemically appear:

the arch of the foot — might never equal
the sole of the foot, its heel,
in being the first body part put down
onto earth since time immemorial —

as we say “limb” for both tree branch and leg.
The bedroom slippers wait for the toes, the ball

of the foot descending off the edge
of the mattress, a wax figure melting. (16)

And just as we say a doubled word in “limb,” so too Terpsichore’s Greek spoke a doubled melos, which meant both “limb” and “song.” This derivation of poetry from the parts of the body (e.g. dactyl, “finger”) is never beyond Jullich’s attention. But in focusing not upon the animated body as much as on the frozen, mimetic body of art, Jullich interestingly questions whether the de-melodized, written text must likewise derive from a secondary, static body.

The disease of roots — the foot having to “plant” itself as a limb, which seems altogether gratuitous to the human person — is for Jullich as much an embarrassment to the body as it has become to the poet. And what was once the Adamic shame of genitalia is instead transferred onto the concupiscent desires of the foot:

A carpet covers a floor as if it were obscene
pornographic floorboards;--every rug a fig leaf (16)

Indeed, the real scandal of Michelangelo’s David is not that the biblical hero is stripped naked, but that his foot should still rest on the ground. So too while reading through Portrait, I am struck with unease, scandalized even, by the over-groundedness that indicates over-determined poetic speech. And it is just this determinedness of his language, his historical mythology, his haunting ancestrality, that Jullich converts into kinetic motion. For just as the moving foot must be the planted foot, so too the rooted word must be the moving, the intractably moving, word.

An orangutan transfiguration — a pygmy synonym
For the handcuffs and chains
Of their gender, race age, sexual orientation, would
Stop the from growing downward, tentacles of roots (12)

The pygmy synonym incapacitates the poet by the monstrous specter of its independent volition, establishing roots where he wishes he had none. The terror, which is also the rapture, of confronting the self-moving creation (we cannot help but remember) is just the fortune of mythology’s most famous pygmy, Pygmalion, whose affection for his own marble statue brought it to motion before him.

Jullich’s ability to invoke and be laid subject to the uncanny motion of his own poems result in a work that is radically punctual and postponed; it has been made, but is always about begin. The reader will continually wait for his poems to go one way or another, observing their kinetic rest, left standing “for now.”