A review of Mary Burger's 'Then Go On'

As if a harbinger, the following text presented itself a few months prior to Burger’s book, handwritten in kid’s scrawl and posted in a ground-floor window in my neighborhood:

tital
a chrip to chin

First I was fascinated to decipher the phonetic spelling, then to consider the author’s radical relationship with words. The story fascinated me too. How liberating: shaping the words, to shape the story, shaping the story as opposite to what we “know” as possible (i.e., kids in California imagine China/“chin”). I love to make these words with my mouth and breath because it feels like the usually ineffable thing is piecing itself together right next to my vocables. Mary Burger writes with the same immediacy. Indeed, two pieces in Then Go On, “Two Little Mice” and “Fire Cat,” begin with facsimiles of Burger’s own phonetic poems written at age seven.

A first word that comes to mind to describe Burger’s new book of poetic prose-prose poems is muscular. The writing has a material quality, and does rigorous work to fill the void with taut braids of itself. What void? That which a being confronts in space and time. I mean both the negative and double negative senses of the word: that is, void as meaningless empirical reality, and void as gap, opening, or rupture of reality, i.e., space of possibility.

In “Necessary,” Burger writes: “This language materialized, or coalesced I suppose, as if a fog had been there all along but gradually became opaque so that the air that I had seen through became instead the thing that I could see” (48). 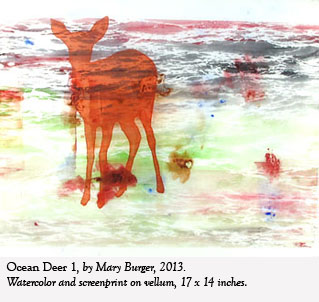 I often wonder how to spend my time. There’s never enough or else too much, so the wonderment is couched in anxiety. In “Orbital,” Burger writes, “This will take up all the available time for a while. I can see from your face that I’ve made an impression” (56). She’s just discussed “the scale of things entrusted to us [that] staggers even ourselves,” and suggests the gamut from subatomic to outer-orbital. The next strophe proceeds: “This paradigm shifts so that words are as nimble as neurotransmitters. Like a small chemical messenger, a word can do anything you can think of. A word can move muscles. A word can hold eyes” (57). I’m encouraged by the time I fill with Mary Burger’s book, as the flexible, capable word toils to trace the contours of an intricate topography. The sense of effort here is a solace not a suck because it activates the subjectivity of everyone involved. The prose invites me into its gullies of white space and other deferrals — so I’m the living thing that bridges its gaps; the immense tensile strength, poise, and lucidity of Burger’s writing grips and focuses my attention as I cross over.

In the first section of “The Man Without Stumps IV,” Burger outlines how language falls short of her wishes for it: “the alphabet was not the moving topography I’d been imagining” (77). Yet by gathering and applying language materially onto “the vastly featured terrain that shifted around me,” she vanquishes these limitations. The section comprises a single sentence that extends over nineteen lines, kinked with equal parts repetition and caesurae. “This sequence of individual graphemes does not map the parabolic movement of the knife-edge ridge of a sand dune,” but in a sense she casts the dune in negative, parallel impression — unspooling the sentence against it. In other words, torqued by the interplay of repetition and extension, the writing enacts the “parabolic movement,” “striations,” and “shifting” of the terrain with its own sinuous shape. 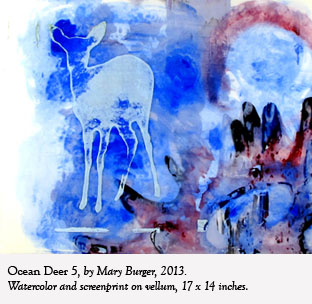 Burger’s thoroughness accomplishes an occupation of time and space that yields agency. She starts with nothing, beginning at the beginning — her phonetic protolanguage — and never denies nothing’s constant, in the cracks of contingency to either side of reason or its semblance. “The Man Without Stumps,” for example, foregrounds an absence of legible form. Mid-careen down a crumbling cliff face, the man “notices then that he is not standing on anything, that he is in fact surrounded by nothing … Not just nothing he recognizes, there is nothing at all” (68). The man is nondescript, bouncy, soft, the terrain sliding and loose. Any form they retain is a turbulent blur. In a strophe on raising tents: “Always at the fulcrum of the lift there is a chance someone will give out. One pole will swerve wildly, others will waver, suddenly the whole sky will lurch to one side and collapse” (65). No determinate shape or area is reliable, all’s in flux, spanned by “the cloud of being that dispels millions of colors in gray matter, an atomized mist, [that] surrounds us and is chilly, we can’t separate ourselves from it or feel any perspective, we can’t look at it because we are in it” (69). Burger manages to write in, of, and by this cloud, manifesting not only that form is fluid, but that myriad appearances coexist of a truth that can’t be defined.

The final pages of “The Man Without Stumps” comprise a succession of interpretations of “the graininess in the picture that might be me”:

The graininess in the picture that might be me could be a ball caught in mid-
bounce, a Frisbee powered by a good throw. It could be a dog with a Frisbee in its mouth.

The graininess in the picture that might be me might be a glass of lemonade. That
might be you behind me, reaching for me, a cool glass wet with condensation, the
pale lemony water choked with ice.

The graininess in the picture that might be me is part black part white and faintly crescent-shaped.

The graininess in the picture that might be me, it gives just enough information to
go on, just enough texture and contrast for me to almost hold together. Stay with
me now, I am almost about to exist. (82)

Each reading of the picture is just as true as any other, and just as false. Burger’s communication is authentic not as external fact, but insofar as it activates and engages an I. The rotation of hypotheses answering the anaphora, “the graininess in the picture,” builds a formal concatenation that carries the thinking subject and almost embodies her; constant motion and plurality match the ever-unmade, ever-in-the-making subject. 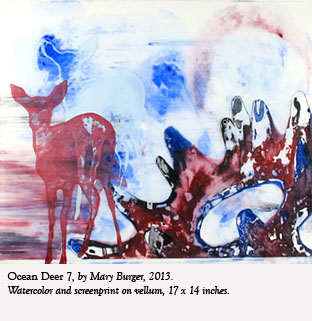 Revelations, repetitions, questions, contradictions, hesitations, violations: all arise and weigh the same. What matters more than the particular shape of the word-bodied thought, is its engagement in the traversal of time and space. Burger’s word is not “spent” in the sense of expended: extinguished, dead, switched off, etc. Nor is time itself used up or killed. Rather, the word and time may be said to expand — and thereby open vital lacunae in the blah everyday. In turn, in this breaking space, “aesthetic” experience becomes possible.[1]

In “Rusted,” Burger deals explicitly with “pure aesthetic gesture” (4). “We believed the most extravagant, precise, deliberate, but utterly nonutilitarian gesture to be the most perfect” (5), she writes. Pointing to the impracticality and stupidity of “photographs of ourselves sitting on the thing [a defunct pipe] and grinning” (5), the poem celebrates a free realm for play and the suspension of sense-making. In the poem prior, “I Like Purple,” another nonsensical zone blossoms weirdly in “the transformation of an embroidered peasant shawl into a wriggling hallucination — girls lined up, one row above another, as if in the corridors of a cell block, a bar or scarf floating across their middle, and below the heads of the next row, the bars moved and danced with the girls, and it seemed the whole system might split, but it didn’t” (3). A vivid, extraordinary vision defies understanding but endures anyway.

Burger’s writing reaches far, pressing into multiple dimensions. An aphoristic character surrounds sentences with auras of implication, in the way that parables and miniatures are both tidy and infinitely extensible. Still, however resonant with compression, abstraction, and calm, the proffered advice is not easy or reasonable. Burger answers complexity with complexity, with grammar that unwinds and divagates interminably even as it’s wrought with utter precision. As a consequence, where precariousness matches attention to detail, we adopt a discipline of deep focus — or risk substance’s dissolution. 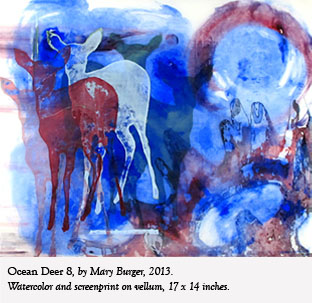 Here again is the book’s substrate: in the face of formlessness, Burger activates the present by way of ideas — contemplating contingencies one by one as they appear — as well as formally, with deftly woven prose. She notes potential pitfalls: inauthenticity, by attempting “to seize the impossibly ephemeral moment, to hold onto a reflection which was not the moment itself” (“A Series of Water Disasters,” 16), excess, or “the nature of mind, that wants to be elsewhere” (“Necessary,” 49), and denial, by answering “the ubiquitous emergency as if it wasn’t happening to us” (“Blush,” 46). In the last, ongoing catastrophe just beyond our scope takes the form of a “subtly pulsating, high-pitched whine,” that provides a constant, abstract threat but no real compromise to sitting “in this shady backyard sharing a meal” (47). Yet the repercussions of the alternative — not to attempt to examine one’s experience, not to question, think, or write — are worse than these habits that the subject strains to break. In Then Go On, Mary Burger coaxes a body of writing as changeable, fluid, serious, and vulnerable as a living body, in evidence of a mindfulness that awakens, in turn, the reader’s reciprocal attention to new spaces of possibility.

1. I understand (via Friedrich Schiller’s definitions, via Jacques Rancière and Claire Bishop) the aesthetic object of free appearance as that which maintains total autonomy from sensible, ordinary, productive modes of reality. As such it creates space for play and pointless activity, questioning and reimagining.