Brandon Downing’s Mellow Actions is the latest installment in a body of work notable for its batsoid consistency across realms as diverse as film, collage, and verse. It’s the wish of this reviewer to induce in the reader a sort of psychical readiness to enjoy this book, much like Iannis Xenakis’s miniature zoom-crackle composition “Concret PH” was designed to gird the nerves of picnicking spectators in preparation for Edgard Varèse’s “Poème Électronique” at the 1958 Phillips Pavilion.

Mellow Actions, dedicated as it fittingly is “For San Antonio” — where the Alamo, I believe, “stands,” a fine central Texas metropolis known for its convention centers and a river boardwalk festooned with Anthropologies and P.F. Chang’s — also seems very Taos-y, with ghostly stucco and Kokopelli affectations beaming in the aura of an AWOL spirit animal’s cocky inner shout-outs as they’re thickened and thinned by the American West’s nuclear-test-laced places.

“You’re just a foolish girl character
In milk industry-sponsored playlets
I perform for schools across the urban Southwest.”     “So?”

With all the sanguine gusto of a super-parasympathetic nervous system that knows neither fight nor flight, Mellow Actions makes for a real wide-open-type palette of dreams; it gave me over to association, waving my receipts around in the night-hot stillness of the San Antonio at the end of the mind. Have you ever found yourself trying to open a new tab in your brain? And did you know that, at its most extreme points, Texas is some 800 miles across?

Shortly after Mellow Actions’s midpoint I think of Scott Walker’s song “Jesse,” an ode to catastrophe refracted through horror-corny Memphis moonlight and the ghost of Elvis’s stillborn twin brother that ends with a Beckett-like figure doing a smart Sisyphus exercise:

Smoothing out the prairie

All the dents and the gouges
and the winds dying down

I lower my head
Press my ear to the prairie

This covers only one aspect (the Aquarian, perhaps) of Mellow Actions, its forms and the feelings these forms impart; the other, Dionysian aspect (and it is within the resources of this text to be shabby, so I mix god systems for you) is its actual language stuff, those “frightening variants of turgid nougat” churning bloodily through larks of chatter and moments of arduous lexical gorgeousness:

Which way could I get repetitive sets of
Four of my arm and wing feathers
To, on their own, tighten and form into
Stretched arcs, launching from my
Locked back, evenly spaced, towards a
Progressive storm.

With his tenacious and wide-awake Mellow Actions, Downing really “throws down” (all the chips on one move), or “throws up” (hands/inner organs), or “lays down” (the gamut/law/new rule), or “lays up” (Spurs basketball is a major subject), or “lays out” (as on a terracotta gurney, bullhorns and rhinestones epoxied to it, very mystical-stressed Las Vegas cast in the mise en scène) his vision of poetry in the age of “thoughtfully raised beef” wherein he’ll “store your web prints, transfer them to DVD+R, archive it, / Leaving you to focus on village flyovers.”

Mellow Actions also brings to mind Anthony Burgess’s “A Shorter Finnegans Wake,” which was such a daft/dim idea seeing as it’s hardly FW’s length that turns people off, and in truncating the thing into a merely shorter work with its own peculiar thickness he left these inadvertently funny chimerical glimpses of the twentieth century’s flyest homme qui rit. This feeling of compression, kneading, regurgitation into a form whose own apparently unforeseen contradictions express an additional level of comedy (of the flatfooted pratfalling variety) is present in Mellow Actions. A keyed-up reader will get the sense of many levels of both recursive and fractal revision having happened in order to get the periodic cheeseboard of the elements of Mellow Actions just right and wrong enough.

The title poem is a clear single, a nerve-tremblingly silly deep epic miniseries of serial form, showing that drawing-of-straws methods can offer a short hop to that Gesamtkunstwerk.

Anybody recall some song about a good general contractor?

As we meet the middle of this review, I present to you the manifesto that Mellow Actions wrote for itself in my head:

Mellow Actions is the product of a Rimbaudean surrealist technique (because in spite of what the facts say, “mellow actions” is, in our hearts, a rearrangement of the letters in the word “illuminations”) getting velcroed to a vernacular syntax at violent and joyous odds with the conspiracy between literacy and interiority.

Mellow Actions posits, in each of its many linked verses (think Japanese cooperatively group-written renga linked verse circa 1680 with its group dynamics of being not very cooperative at all and often most concerned with mutual skulduggery and sabotage), a comic speech that equates up-to-the-minute/over-colloquial/oversharing-prone/Internet-entangled attention-and-communication patterns with the proverbial “eternal Now,” a venerable, archetype-less, paradisiacal inner space —

And in so doing, Mellow Actions ouroborizes the dialectic between Transcendence and Proximity (or, sez Emerson, between logos and ethos, Power and Will, etc.) that is endemic to much American poetry if not poetry in summa.

Mellow Actions will, on that note and in every line and with MUCH LOVE, airbrush away whatever in the way of “meaning” might be misconstrued on either side of itself beyond the investing weirdness of today’s homepage’s psychic microclimate.

Let me end on a general note. For the overall excellence of this text, and also (without meaning to court gestalts) for the relevance to radical aesthetic praxis of the type of labor that went into enacting it, the term “bleeding edge” comes to mind — although like with a butter knife, that bluntest yet whipsmartest item in the knife family, like Zen “cutting through everything, even its own knife.”

Like Stevens’s bleach-in-the-sky vision of a mind without day or night, “the accomplishment of an extremist in an exercise.”

As I gaze on page 25’s fiery Lava Gym Downtown New Braunfels logo, I am one with tumbleweeds dozing in red dust. 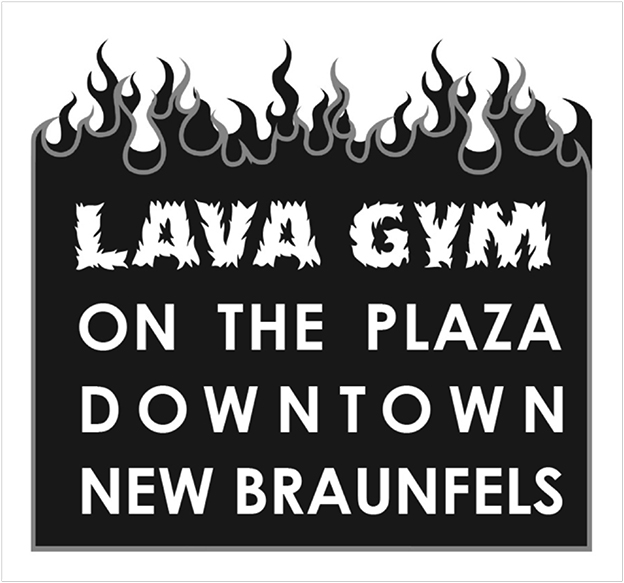 Mellow Actions: a systematic derangement of the senses, minus the senses!