A review of 'Nox'

Anne Carson’s newest book, Nox, seduced me immediately. The book in its clamshell case is a physical, touchable thing. Nox is an accordion-fold book, one forty-foot long page, folded to roughly the size of a half sheet of letter paper. It’s a tactile and visual delight to open the lid of the case and extract the stacked accordion-fold volume, to scan its palette of sepia tones and late, small bursts of color. Reading it is a sensory experience; the composition — a collage of text, photographs and drawings — engages the eye, and the narrative is engrossing and moving.

Carson writes on the back of the case that Nox is a replica of an epitaph she wrote for her brother Michael when he died. It is an elegy, built around an elegy written by the Roman poet Catullus over two thousand years ago for his dead brother (poem CI, or 101). Carson, a scholar and professor of the classics, has explained in interviews that she has always loved the poem. There also seem to be somewhat parallel circumstances: both brothers died far away, word didn’t reach the surviving sibling for some time, there was a journey to the place where the brother died.

A stained, smudged, typewritten reproduction of Catullus’s CI appears at the opening of Nox; Carson places her translation towards the end. Carson uses the Catullus elegy as the structural foundation for Nox, deconstructing CI word by word. She extracts each of the sixty-three Latin words from the poem in sequence and gives us a dictionary definition, presented on the left panel of each opened pair of folds. The right panel presents memoirs and reflection, remembered events, conversations, integrated with parts of photographs, line-drawn or painted images and other graphic elements. [1]

The book’s contents are further organized into ten numbered segments, as if the contents have been catalogued (1.0, 1.1), or put into a formal outline: ten segments of varying length. This is all to say that the work is highly structured and controlled. The careful assemblage gives shape to the content and to the ideas that form in the flow between definition and fragmented narrative. The structure creates correspondences, conceptual threads that link the two aspects.

The question of how to shape things is a primary consideration for Carson. She uses the Greek term morphe to explain her approach to Michael Silverblatt in a radio interview (the BookWorm series):

each idea [has] a certain shape, [and when] I found the word morphe it was to me just the right word for that, unlike “shape” in English which falls a bit short, morphe in Greek means the plastic contours that an idea has inside all your senses when you grasp it for the first time, the first moment, and it always seemed to me that a work should play out that same contour in its form …[2]  I can’t start writing something down until I get a sense of that morphe, and then it unfolds — I wouldn’t say naturally — but it unfolds, by keeping only to the contours of that form.

In Nox, the contours of the form are defined by correspondences between the two texts —  Latin definitions and personal narrative — but not solely. The integration of visual elements, disparate textual elements and overall design decisions point to Nox as an artist’s book. 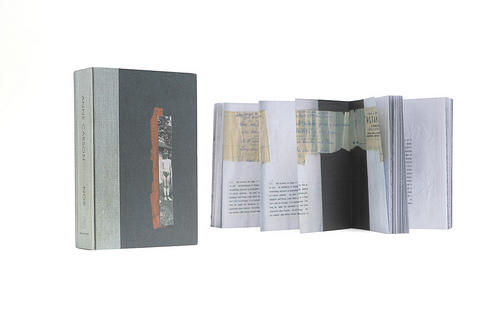 Carson’s previous books also juxtapose classical literature with personal experience. She uses the ancient works as a prism through which to view and deconstruct her experience, so that her writing takes shape within juxtaposed fragments. Nox, however, is the first in which those thought processes and associations are made visible in the very form of the book.

That is, Nox is not only about reading. It’s about the way meaning unfolds in investigating the origins of remembrances and the definitions of the words that frame the experience, in associating the speculative with the definitive. Carson creates meaning through layers of curated intersections — text-text, text-graphic, graphic-graphic — that in the hands of a skilled semiotician would no doubt reveal similar intersections and correspondences between signs and signifiers.

In the text itself, however, one way Carson builds the complex of this remembrance is by linking the Latin definition to the content on the right side. When the Latin word doesn’t relate, she interjects something of her own. Her inventions most often introduce “night”  into the scope of the Latin word, creating a sotto voce thread, a low-murmuring voice that carries the title’s theme (nox is Latin for night). For example, with interea (in the meantime, meanwhile), she adds “against the law yet only at night.” With et (and what is more, too, also), she adds “and do you still doubt that consciousness vanishes at night?” With mutam (inarticulate or making no sound): “there was a better reason for not writing.”

It’s here that the poetry lies, to be excavated from Nox as artifacts from the midden of a life: a few objects, stray bits of conversation, scenes that hold the light, a letter, a feeling, a drawing, a photograph. Carson’s collage represents as complete a portrait of her lost brother as she can get.

There’s a telling quote from Herodotus near the end: “I have to say what is said. I don’t have to believe it myself.” This from the father of history, of the practice of writing down what happened, gives us a platform from which to gaze back on what we’ve read and the story we’ve gleaned. Carson gives us what is said by her brother, her mother, her brother’s widow, and what she herself said in the past. What she says now is a ghost-driven narrative, delivered as forensic or archeological evidence. In Nox, Carson expresses some carefully-thought-out suppositions about the few “said” episodes in Michael’s life and the memories of which she is a part. She leaves it to us to draw conclusions. And as we traverse the folds, the book reveals its story by accrual, through a curated experience of the artist’s personal narrative placed in the context of the classical tradition in poetry, and the subjects of death and family, loss and remembrance.

That Carson’s multifaceted explorations of her response to Michael’s life and death are almost too much to contain in the shape of a book is attested to by more than the unusual print format of Nox. As a book, Nox doesn’t lend itself to the standard author’s book-tour reading, and Carson, true to her restless seeking after the shape of things, has taken Nox to the stage. She has collaborated with Robert Currie and dancer/choreographer Rashaun Mitchell in a performance that integrates contemporary dance and music with Carson’s spoken word. Alastair Macauley, reviewing the performance for the New York Times, calls it an event “where different kinds of poetry become layered upon one another with extraordinary eloquence. Words, dance, translation, cultural commentary, lighting, music — all add discrete but overlapping zones of beauty, meaning, drama.” To this reviewer, the staging of this long poem with all the depth that the physicality of movement must provide fits both the morphe and the translation schema that frame Carson's approach to working with language.

A review of 'We Want it All: An Anthology of Radical Trans Poetics'

Katherine Gibbel
Post-landscape
Brandon Shimoda's 'The Desert'
Jennifer Soong
The carceral outside
A review of 'The Desert' by Brandon Shimoda
Dale Enggass
Reading weed acts
A review of Carol Watts's 'Dockfield'
Srishti Krishnamoorthy-Cavell
A provisional map of who/what/where we are
A review of 'Inciting Poetics: Thinking and Writing Poetry'
Andrew Mossin
Infrastructures of feeling
Fugitive fugues in the undying present
David Buuck
The poet as symbiont
A review of Harry Gilonis's 'Rough Breathing: Selected Poems'
Colin Leemarshall
Queer treatments
A review of 'Each Tree Could Hold a Noose or a House'
Aylin Malcolm
Hers to elegize
Aria Aber's 'Hard Damage'
Annie Bolotin