One easily forgets that writing is an act of drawing. On this, Renee Gladman insists: “Drawing was a process of thought — that was true, and so, and especially, was writing.”[1] This notion can be grasped in two ways: on the one hand, inscription is visual. A letter is always a mark, something scrawled. It is only when the mark is given meaning that we come to know and understand it as writing, so that A is A. The architecture of shapes and lines become letters, words, writing. On the other hand, through gesture, whether with a pen or a keyboard, writing not only situates one in the domain of inscription, but in the mainspring of an idea — that is, writing as the “drawing out” of an idea. Writing is thus also drawing in terms of gesture, and as that which involves the body as a force of pulling. To think drawing and writing together as part of the same order of communication is to reproach the question of such a distinction in the first place. Given this equivalency between drawing and writing, that writing is drawing, is the reverse as comfortably conceivable? What does it mean to think about drawing writing? Moreover, when the body, too, is considered part of the movement of the line, what does it mean to think about casting a line, a thought, a sentence?[2]

Gladman’s Prose Architectures continues to investigate such stakes following her recent essay collection, Calamities, which similarly ruminates on acts of drawing writing.[3] Prose Architectures is flanked by an introduction by Gladman and an epigraph from Virginia Tufte’s Artful Sentences: Syntax as Style on one side, and an afterword by Fred Moten on the other. These texts do not so much explain as adorn Gladman’s drawings by underscoring the energies and forces that impel her lines. In her first monograph of “drawn writings,” Gladman assembles 107 of what she calls “prose architectures” (out of three hundred that were made between 2013 and 2014). In a book that attempts to demonstrate the equivalency of drawing and writing, Gladman’s insistence on drawn writings remind us that writing is drawing — that writing can be drawn. In doing so, Gladman wants to write about the form of language itself. It is within this purview that she calls her drawn writings prose architectures. Such a designation not only gestures to the architectural form of language and prose, but will, in some of her drawings, begin to take on the form of buildings, grids, and cityscapes. Thus, the equivalency between drawing and writing occupies the space of analogous gestures (moving the body through space to create lines, drawing out ideas), but also the space of architecture (language’s forms and angles, building, building language). 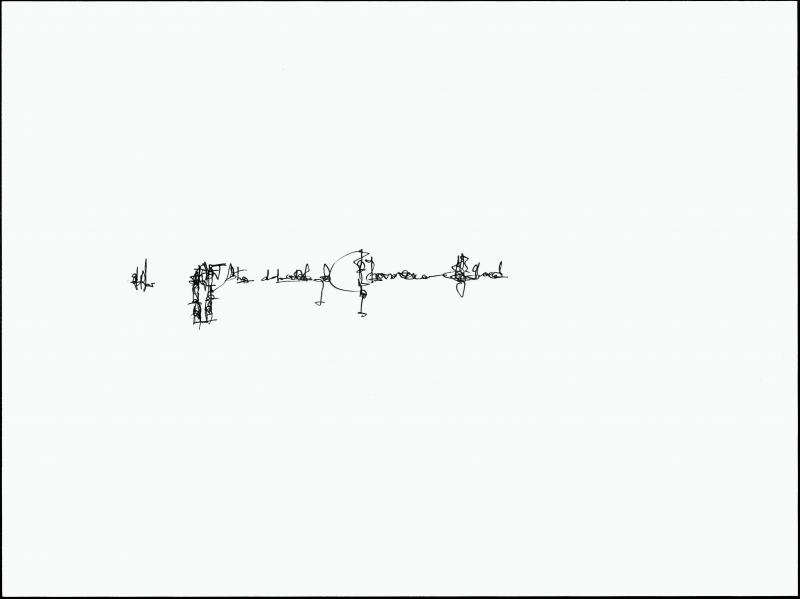 Gladman’s prose architectures sometimes approximate the kind of language one is used to seeing as written — as handwriting, as sentences, as words imbued with meaning. Sometimes her drawings look like buildings, architectural plans, cityscapes, automatons, letters, or tiny vortexes of thought. Her prose architectures bring one to the brink of sense. While a few intermittent words may seem recognizable, Gladman’s “drawn writings” gesture toward that architectural vanishing point of language where sense breaks down. A shield of inscrutability covers over the desire to interpret; the poems jettison the question of interpretation in favor of giving form to form itself.

Gladman’s invocation of a “prose architecture” therefore asks that we see the building blocks of language, and language as building blocks, insofar that her work demands that one perceive the constructedness of language itself through structure, rhythm, and mass. More still, further consideration of a prose architecture also opens the possibility of seeing the prosaic in architectural form. In other words, the overlaying of writing, drawing, building, map, architecture, grid, form, etc., generates that specious capacity to perceive what inheres in form. Drawing writing is therefore as much a productive act as it is an economy of perception. It is not so much that something hidden is revealed to us through such perspectival shifts; rather, the shift itself entails our capacity to grasp what is already built before us. 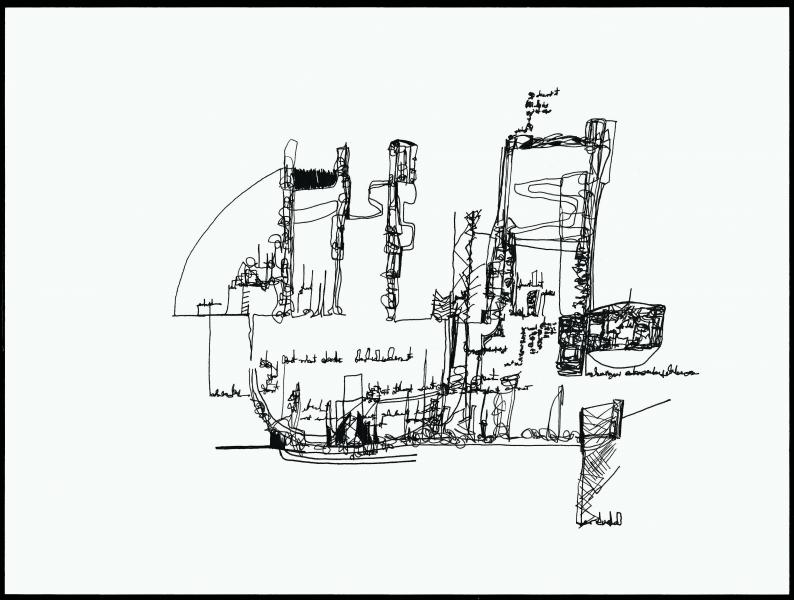 In her introduction, Gladman notes that she shifted between writing projects and drawing to the eventual realization (with the writing of the third novel in her Ravicka series, Ana Patova Crosses a Bridge) that her “two lives” (of drawing, of writing) “collapsed into one elaborate question about the making of space.”[4] It is therefore with the materiality of the line that Gladman came to realize that “there are dimensions to language that are very difficult to describe with language, and yet it is only in language — in trying to move through it — that one has the privilege of experiencing these dimensions” (x). Prose Architectures should not therefore be read as the “visual” accompaniment to the work she began in Calamities. Rather, both these works constitute a shared plane of investigation as to what is involved when one is trying to use language to speak about language.

In Gladman’s Prose Architectures, however, it is “the idea of plans, the suggestion of architecture” (viii) toward which her drawings attempt to gesture. Gladman’s drawings are not drawings of particular things, plans, or buildings, rather they are attempts at drawing thought itself, at drawing drawing and writing themselves. Such an endeavor, however, should not be seen as merely indebted to a thesis of the miniature: that form itself has no form proper to it. Rather, Gladman’s drawings also work “to point elsewhere: toward a different mode of being where thinking takes the shape of buildings” (viii). Here, the relation between aesthetics and ethics begins to draw itself out. 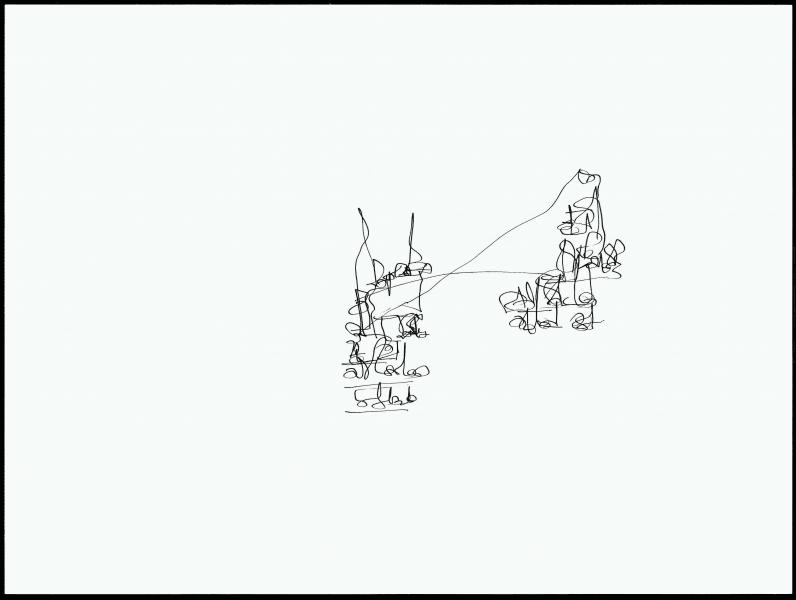 Prose Architectures is therefore nothing other than a collection of scribbles. Such a statement is uttered without naïve invective and is, instead, offered as an injunction to read and perceive Gladman’s premier foray into a genre of the architectural sketch at its most concise and definitive naming: the line and its desire. As lines that bear and play with the barely imperceptible, Gladman’s drawings are infused with energy, thrust, division, separation, and relation. But what does the line have to do with desire? And what does it mean to think of its desire? Put another way, what does the line — the infinite — have to do with sex? The invocation of sex is not meant to justify these drawings as belonging to the genre of associations, such as Rorschach inkblots. I would therefore like to think about Gladman’s drawings less as sexually suggestive in terms of feeling or resemblance, but more in terms of form, movement, spacing, and kinetic potential. In the gestural framework which encloses these drawings, the sexual is not metaphorical or associative, but aesthetic: that of delineation and difference. Such writing, according to Gladman, is “language with its skin pulled back” (xi) — and such a statement’s erotic unfurling must be noted.

In trying to give form to form itself, what is therefore being staged is not a particular designation but designation itself — everything else is accidental. Gladman’s work can therefore only bring us to the edge of edge-ness/edginess itself. Gladman thus represents for us an incredibly difficult endeavor, and it is an endeavor coupled with frustration that returns to propel the reading of the edge of her lines. Put another way, frustration is not the necessity but the consequence of gesturing toward the very idea of gesture itself. It must always approximate that sheer threshold of inscription — and because it can only continue to draw itself as an act of drawing itself — its “completion” as a drawing is forever repulsed into the domain of what Gladman had appropriately called calamity. 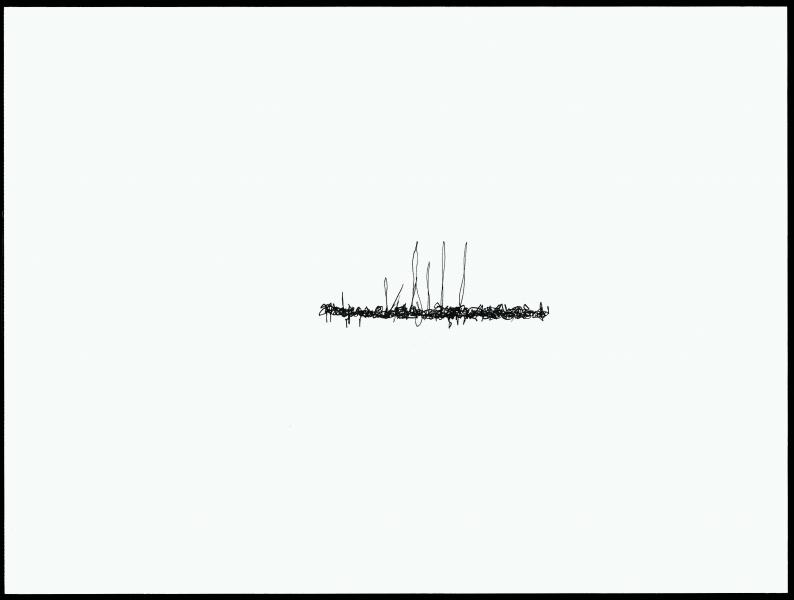 “Prose Architecture 71” may look like an encephalograph, a heart monitor, an audio recording, a compacted wavelength. As a kind of miniature scream of being, this drawing aptly encapsulates that difficulty which constitutes being. What Gladman attempts to capture is the difficulty of gesture itself, of every minutia, every instantiation, every thought, every lacuna that perpetually drives ways of relation. If Gladman’s drawing writing therefore returns us to a sense of senselessness, it would behoove one to think of this gesture less as an exposé of relationality than a reminder. It is within this view that Gladman’s drawn writings seem stubbornly alive.

In his afterword, Fred Moten will summon the notion of this moving inertness by designating Gladman’s “bearings.” Bearing means to stand or hold weight, but also how one moves. A mechanical bearing restricts movement in a certain direction. It is with the plenitude of meaning afforded to the word bearing that perhaps allows Moten to ask how we can “renew infection” in the sentence (114). On this, Moten insists on Gladman’s play of the period. Claiming that Gladman “reinvented the period” that “rubs out a tantric sentence,” Moten identifies the erotic rhythm of Gladman’s drawn writings, which provides “a portrait of the bass line” (113). Such disfigurements of language at the level of the syntagmatic remain necessarily unresolvable and posit the sex of the trace — buildings, things, people, marks — in terms of movement and gesture. In this way, Gladman’s Prose Architectures are reminders of the necessity of the gestural. Drawing and writing, writing and drawing, therefore become metonyms for the infinite substitution of the sensual grid.

1. Gladman is following Monika Grzymala, who writes: “Drawing is a process of thought which is conducted by the hand.” See Renee Gladman, Calamities (Seattle/New York: Wave Books, 2016), 104.

2. Following the breakdown of such a distinction between drawing and writing, these two terms will henceforth be used interchangeably.

3. See Prathna Lor, “‘The lip of a paragraph’”: On Renee Gladman’s Calamities,” Jacket2.

Building sex
'The lip of a paragraph'