Renee Gladman’s Plans for Sentences explodes the poetics of ekphrasis. Part artist’s book and part prose poem, Plans for Sentences pairs Gladman’s calligraphic drawings — which resemble imagined architectures spun from the curves of illegible text — with prose that proclaims what the drawings (or “sentences”) will do. These sentences, Gladman tells us, will move and pause, “breathe” and “blacken,” “gather” and “void.” They will travel the architectures and cities they resemble, which may be places of opening or “shelter,” places that “prolong the horizon” or simply construct a “floor for sky.”[1] In alternating pages of image and text, sentences drawn and written collaborate in Gladman’s exploration of what the sentence — as line and as language — can do.

Readers familiar with Gladman’s drawings — which were first collected in Prose Architectures — will be delighted to find here a kind of artist’s statement that captures the provisional and gestural sweep of her visual work. But they’ll also find a “statement” whose mode of describing looks a lot like laying plans. Artist’s statements tend to be a past-tense affair, an explanatory footnote to what has been made. They speak the language of intention in the afterglow of completion. By contrast, Gladman’s writing insists on the future tense that organizes both “plan” and “sentence” into a generative incompletion and an ongoing act of carrying out. It insists on carrying the associations that make the “plan” a waiting game and the “sentence” an order of time to be served: a duration that plans its own escape. It also insists on insisting. As page after page launches itself with the declarative reach of the future tense, what these sentences “will” do figures a language that wills us towards a radical future. “These sentences,” Gladman writes, “will balance the question of movement against that of enclosure, will slant the rise against the cleave, and will add a portal to what you’ve been saying. They will out and cleave” (29). “These sentences will gather all the pauses into a flowing assembly, into a speech that is only the comma, and will hold time as it distills and blackens in equation”(21). These sentences will keep moving, and drawing will record their paths and deviations.

Not all of these sentences will be the same kind of sentence, though. Each will move differently through the architectures of the social and the gears of thought. After all, these are plans for sentences, not for “the sentence.” The book is not a manifesto. It doesn’t sentence “the sentence” to a term of aesthetic activity or map its itinerary among the units of poetic composition. But it does trace a path and a pressure that leans towards a future where the break, the cleave, and the edge become a place and a way of dwelling. Perhaps this tension between moving and dwelling is the reason Gladman’s abstract drawings evoke — and even sometimes resemble — architectures on the move. Perhaps it also explains why the refrain of “these sentences” is occasionally broken to make room for other forms that organize movement: “these curved enclosures,” “these dense woods,” “these dwellings,” “these moats.” For it turns out that a “moat” is no less open to deviation than a sentence, and that a “dwelling” may be just as prone to flight. A curved enclosure can shelter a body or send it running in circles. You can get lost in the dense woods, but sometimes you need to get yourself lost.

In the index that concludes this book, Gladman rearranges her written sentences alphabetically, allowing these other places to reveal themselves in all their structural variety. In addition to “moats” and “woods” we find “these sentences” transform into “these electricities,” “these equations,” “these flutes,” and “these places.” We also see places where the refrain of “these sentences will” gives way to the demonstrative “these,” foregrounding the “will” that wills the sentence towards an elsewhere: “These will climb the substrate: they will roll. They will roll and go quiet. They will roll, a line burn­ing into the surface. They will over backward and will over the start and over the interruption; they will roll and square the void” (11).

We might read the passage above as a description of the drawing it follows, a drawing where the “roll” of cursive builds its own architectures as it climbs the “square” of the page. It’s easy to conceive of the sentence as a kind of line, whether that line is a line of narrative or a truncated line of verse. But what would it take to see the line as a kind of sentence? What would it take to see drawing as a kind of writing? In posing these questions, Gladman’s work discovers that drawing can perform an ekphrastic function as well, especially when the line of drawing collaborates with — rather than precedes or supplants — the articulations of the written word.

Gladman has said that the line of language and the line of drawing are united by a shared “desire or necessity for movement and articulation.”[2] This attention to the movement and moment of the line distinguishes her work from those other experiments with drawn poems, such as Robert Grenier’s drawing poems or Cy Twombly’s calligraphic paintings, that we might reach to for comparison. Even Twombly, whose gestural style comes closer to the mark, seems determined to worry the unbridgeable gulf between word and image. As Cole Swensen writes, Twombly’s paintings remind us “that written language is always the line abstracted, the living line that distilled itself from life.”[3] Yet Gladman’s language feels wholly undistilled. It’s as if she’s discovered the place where the living line and the line of language converge after a temporary separation.

In this place, inscription and description are part of the same movement and moment, the same figurative reach. Drawings follow the “slant” and “line” and “roll” of language as it traces a way through the architectures it inhabits and builds. Writing forgoes the definition in favor of a verbal reach, crafting worlds where “silo,” “grain,” and “awn” may be nouns or verbs, containers or routes, moments of holding or moments of a generative breaking loose. Differences are combed from the surface of language to accumulate places of differentiation. Again, these are not the same kind of sentence. “Fig. 5” writes the sentences that will “shade the block” into a dense verticality that “flutters” in the lefthand margin of an urban grid. In “Fig. 14,” the habitable “shade” and “flutter” gives way to a utopian reach that begins with the more-than-figurative force of “black gathering”: “These sentences will electrify the plain with black gathering; they will be blackened and will rise and cleave, magnetically, in an intake of housing” (29). 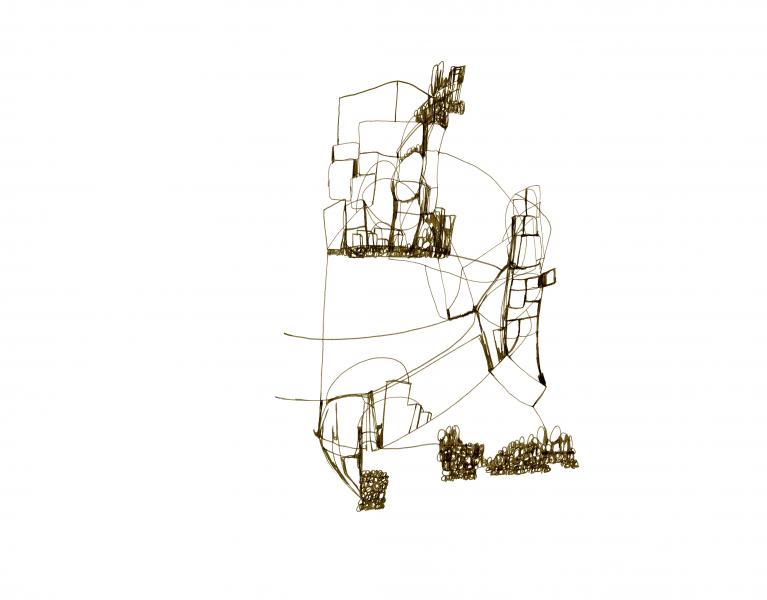 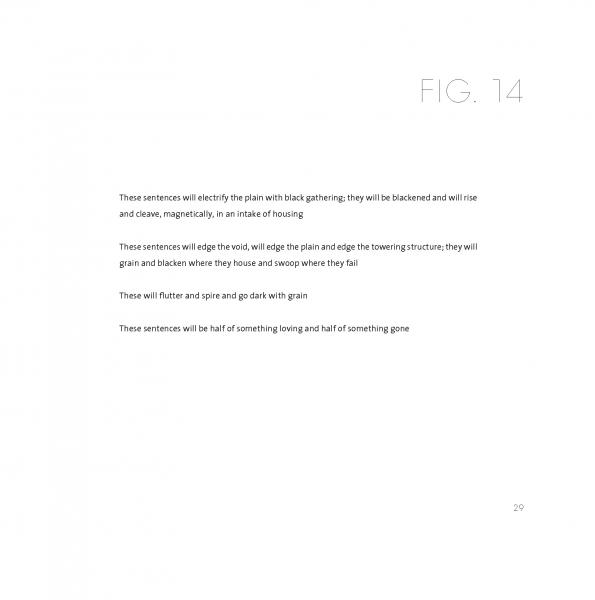 Encountering these sentences, I’m reminded of a line that one of Gladman’s novellas delivers on the subject of architecture. In Ana Patova Crosses a Bridge, the protagonist describes living with architecture “as a consequence of language,” so much so that she begins to say “that things architectured other things.”[4] “Architectures” is a verb in these drawings, too. And it means something more than “building,” although building might be one of the things that it does. “Architectures,” as I read and see it in this book, describes the way people’s acts of moving and gathering stand in reciprocal relation to the structures — architectural or otherwise — they create.

Despite its resistant abstraction, Gladman’s work is intensely social. It’s no accident that the diminutive swirls of her capital letters resemble the cluster of figures in a crowd or the forward tilting heads of bodies on the move. These sentences are going somewhere. At times their utopian “march” (7) is figured in the “black luminous, slow-going forward” (93) of sentences that will “ache,” “emerge,” “blacken,” “rise,” and “chart a history of wander” (119). At other times, they seek out places to pause and to dwell in a thickened present. Such sentences will “form a sanctuary for refusal” or will “draw the poem to the silo and will lean into the sanctuary.” They “will out and quiet; they will blacken and open and will shelter / These sentences will have shelter” (121).

These sentences seem to answer a question Fred Moten posed in his afterword to Gladman’s Prose Architectures. “Is there a refuge in the sentence? Is there an underground railroad in the sentence?”[5] Plans for Sentences meditates on these questions and responds to both with an emphatic “yes.” One of its most persistent verbs is “blackening,” which here becomes inseparable from the sentences that “grain,” “score,” and “spire” their ways up and along and across the page. This processual, visible, and verbal blackening inverts the scheme employed in Gladman’s One Long Black Sentence (indexed by Moten), where predominantly white ink drawings move like captions against the black pages that Moten calls “the blackground: that non-representational capacity that lets all representation take place.”

In Plans for Sentences, blackening takes precedence as the figure that moves figuration, as the will that builds to unbuild. Blackening also takes place, suggesting that the utopian edge these sentences move towards is a black edge, a place of black figuration. From the index:

This interest in blackening and holding is where the utopian thrust of Gladman’s image/prose grows loudest. It grows louder still when the sentences break from the future simple and launch into a future perfect tense beyond that break:

These sentences will have erupted from the plain, among the ruins of several burnt-out bunkers, your silo farm, and they will grain from the earth, each with a bending horizon and one vector pointing to space. They will cluster and contort.”(15)

Reading these sentences, we are reminded that “to silo” can mean to store (as a silo stores grain for nourishment) or to isolate, to cordon off. We are reminded that “grain” can be stockpiled as nourishment or can wait as seed. Gladman’s sentences activate these possibilities as possible routes. In the process, her sentences call on us to plan along with them and dwell in the wake of their consequences: to follow lines that “lean” and “void” and “out” the very movements they undertake. They may look like cities, but they plan the way a seed does, “holding” the germ of their movements in the gathering force of stasis. “These dwellings will form the moment the seed splits and releases the cross-section to time; they will let their walls go; they will cleave and grain. They will fold” (27). These sentences will churn up the ground.

July 13, 2022
Related:
Renee Gladman and the New Narrative
(Un)Disciplining the ethnographer's body
'The lip of a paragraph'
TAGS: