Editorial note: Susan M. Schultz (b. 1958) is a poet, author, English professor at the University of Hawai’i at Manoa, and founder of Tinfish Press. Her books of poetry include And then something happened (Salt Publishing, 2004) and Aleatory Allegories (Salt Publishing, 2000). The University of Alabama Press published her critical work A Poetics of Impasse in Modern and Contemporary American Poetry in 2005. What follows is a transcript of a December 22, 2008, phone conversation between Leonard Schwartz and Susan Schultz about her 2008 book Dementia Blog (Singing Horse Press). The conversation aired as a part of Cross Cultural Poetics, episode 180, and was produced at KAOS-FM 89.3 in Olympia, Washington, at Evergreen State College. Ben Hargett oversaw production with Claire Sammons acting as communications coordinator. The conversation was transcribed by Michael Nardone and has been edited for readability. You can listen to audio of the conversation here. — Katie L. Price

Leonard Schwartz: Today’s guest, on the phone from Hawaii, I’m very happy to say, is Susan Schultz. She’s a frequent guest on Cross Cultural Poetics. Poet, critic, professor at the University of Hawaii and author, most recently of Dementia Blog, a book published by Singing Horse Press, and there’s a chapbook with that same title published by Singing Buddha Press.

Schwartz: Oh, thank you, Slack Buddha. I put Singing Horse and ended up with Singing Buddha. A slack horse. Slack Horse Press and Singing Buddha Press, is that what you’re saying?

So, welcome Susan Schultz. Welcome back. Can you further help unentangle me from the relationship between the full-length book Dementia Blog published by Singing Horse and the chapbook of the same title, Dementia Blog, published by that Buddha press?

Schultz: Well, the Slack Buddha chapbook is just one month out of the blog, which ran for six months on the Internet, although it wasn’t necessarily public knowledge that it was out there. And then the full-length book is the full blog that runs from January 2007 to August 2006 because, like any blog, it goes backwards.

Schultz: Certainly. The blog was a record of six months in the course of my mother’s falling into dementia and I had been keeping a blog at the time, which was sort of a travel blog for family and friends because we were travelling and I was working in Europe that summer. But when we arrived at my mother’s house and saw that things had fallen into chaos, I kept the blog going and fairly quickly realized that this was work that I wanted to pursue more seriously.

So, I was only writing the blog, but as I started thinking about what was going on in dealing with someone with dementia — for whom there wasn’t any longer a sense of linear time — instead there was a sense that the course of my life and the course of my mother’s life were actually the same, that she had forgotten how to distinguish between my life and hers, and she had forgotten how to distinguish the past from the present from the future. She was looking for her own mother who had died forty years ago. So, there was no sense that the cause then led to an effect. More often you would feel like you perhaps got the effect and had to go hunting around for the cause. So, as I was writing the blog I realized that when you read the blog as it was published, you were going from the present back into the past. I realized that you would encounter the effect before the cause just because of the structure of the blog itself, and that became something that I actually wanted because I wanted people reading about this experience to have some of the same confusions that I had in dealing with it and to experience some of that temporal derangement that goes on in dementia. So, when I took the blog down off of the Internet and made it into a book, I preserved that form of moving from the present into the past.

Schwartz: It really is very effective, Susan, very disturbing. I found it unnerving in the way that strong art is disturbing and unnerving — that sense of the effect without cause, the effect for which, as you put it, you have to go out hunting for the cause. The book, I have to say, touched a kind of raw nerve in me that I can’t completely explain. I was eyeing it peripherally on my table for quite a while actually, thinking I know I need to read more of this, but I realize I have a weak point here. You know, I spend a lot of time railing against, cajoling students to not do anything to possibly damage their long-term or short-term memory — because a lot of them use too many drugs — and talking about Mnemosyne or Memory, who is the mother of all of the muses, of all of the arts, poetry, history, theatre, et cetera: that as artists, as writers, one wants to maintain and maximize and sharpen one’s capacity to remember. Then when I was confronted by the possibility of dementia, someone else’s or one’s own — as one sees the possibility of this happening to anyone — one spends all this time developing one’s mind — and then it can unravel. It is a very frightening encounter that I had with your mother through your book. It’s an extraordinary piece of writing.

I wondered if you could read to us a little bit, Susan, from Dementia Blog.

Schultz: Certainly. You said you’d like me to read the section from September?

Schultz: I should start by saying that another layer in the work is political, that as I was dealing with my mother’s dementia, I think we were all dealing with the dementia of the Bush administration, which was hardly an organic failing on their part, it was much more self-conscious. And yet, some of the effects, I think, were similar. One of the effects being that when someone with dementia tells you a story and is absolutely certain that it is true, it causes you to doubt your own belief in your own reality. I think that’s one of the tricks that the Bush administration played on us all. 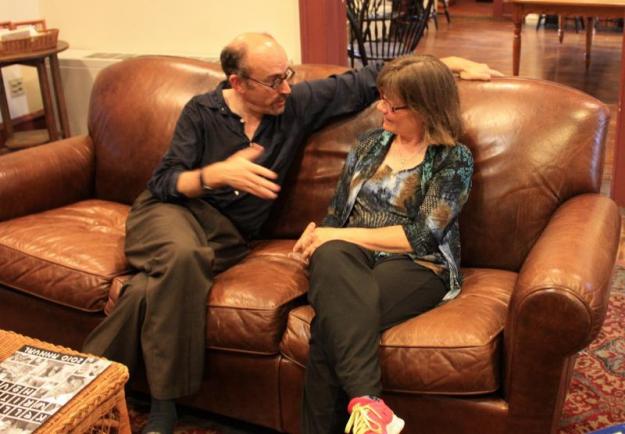 Schwartz: Thank you so much, Susan, for that reading. It’s really quite extraordinary, an extraordinary text in terms of the weave of the political and the personal.

Schultz: I should say, Leonard, that that section was actually more about a former student who was calling me and threatening to kill herself than it was about my mother, and yet it all fits. It wove together in terms of problems with thinking and time and family and so on.

Schwartz: Yeah, it’s clear in the writing that there’s a person who is calling in, who is threatening suicide — that it’s different from the emotional disorder with dementia and the reflection on your mother. In the writing, there’s a kind of complicated weave of that with the political circumstance of the dementia imposed upon us by the Bush administration in September of 2006.

I thought I noted a line from one of my own poems in there about how nonviolent people become violent, but maybe that came from a different source, I don’t know.

Schultz: I know I used your Ear and Ethos somewhere in my book, but I don’t remember where I got that particular line from.

Schwartz: It’s a really rich and complicated weave of things, and so beautifully juxtaposed. You have that section: "My empathy is memory, is a container into which her experience sometime fits, shallow grave or swimming pool (death by water), though mine is a memory of overpasses. Not to pass over, but under by way of air. The air is human. I am the limbless woman."

Schultz: Could you ask me a bigger question, Leonard?

Schwartz: Were one to ask Proust the question about memory, I know what we would get. It would take several volumes. It’s a big question. He’s got quite a few books that are devoted to that, but what would be the thumbnail sketch of Susan Schultz’s vision of memory?

Schultz: I’ve always been quite obsessed with memory, and I think most of my work comes out of the way in which my memory — which in many ways is simply an echo chamber of the larger cultural and social memory — works, if that’s the right word. I think memory is not just a solitary activity. It’s very much a communal activity. It’s what joins us to other people once we take our memories and offer them to others. Perhaps one of the most striking effects of memory loss is that return to a kind of profound solitude that I certainly saw in my mother for a long time. Now that she’s in a better place — she’s in an Alzheimer’s home and very well taken care of — there is a sense that she’s back in community. But she doesn’t speak of her memories. I’m not sure she has them anymore, and so, in that sense, I think there’s a kind of profound solitude that has to do with living exclusively in the present.

There’s also a strong ethical sense to memory. There’s a wonderful book about the ethics of memory by an Israeli philosopher whose name I can’t call to mind at the moment — but the sense in which if you have a memory and you use it correctly, it’s an ethical act. If you fail to remember certain important things, that’s an unethical act. And yet, if you lose your memory to illness, it’s something else again. So the difference between that loss of memory to illness and the loss of memory that the Bush administration tried to create for all of us is very telling that there are different uses of the erasure of memory, and in my book I was trying to negotiate a place from which I was encountering both at the same time. I don’t know if that answers your question —

Schwartz: It’s a wonderful response to the question. I’m so glad I insisted even though you tried to laugh the question off at first. There’s so much to think about in what you just said: the way in which, in fact, memory is communal. We think of memory at some level as a deep form of introspection, and it is, but at the same time certain kinds of memory, certain forms of memory, would not be possible without a conversation, or without the wider conversation that is sometimes called community. You speak so tellingly in what you just said and Dementia Blog itself to that complexity, that complicated tissue of discourse and language that makes memory possible, which is really quite extraordinary.

An interview with Kirill Medvedev

Note: Kirill Medvedev’s brief, shocking “On the Day of My Thirty-Seventh Birthday” details what happens to a revolutionary who has just been involved in killing the president. After acting as a lookout and messenger during the assassination, he mistakenly shoots and kills a fan, whom he mistakes for the secret services but who simply wanted an autograph. Facing this revelation, the poet thinks to himself, “Shit … what a missfire. / A tragic missfire, a mistake, / which means the good-for-nothing president / is still alive.”[1]