Diana Arterian: Maybe we should begin with why we started our respective reading series. Sumarr's humble beginnings are actually due to one of the cardinal sins: envy. You remember watching all the graduating students of CalArts' MFA program reading from their manuscripts to all of us during our first year. Having to wait until the following spring to proffer up my own work and for my fellow first-year friends to proffer up theirs frustrated me. I'm an impatient person about some things. I wanted to read. I wanted to hear my peers read. So in a way it was about providing a space for friends to read to friends, to practice reading work to one another. That said, I'm no slouch and I wanted it to be different than most reading series. I know a lot of local musicians and so I figured it would also be a cool space for them to perform. Have a few readers, then music (palette cleanser/different mode of cerebral engagement), then more readers. Also one of our CalArts buddies Nicholas Katzban had an amazing record collection and was happy to spin, so I had the live DJ element too. Though Sumarr has since graduated to venues, I had a nice backyard and a bunch of chairs. I knew people who would participate in a different kind of reading/event. That's all I needed. Now it’s in an enclosed space and my role is entirely curatorial.

But with ENTER>text I feel like it's a whole other level of alternative reading event. It's funny but I've never asked you – how did you come up with the idea for it?

Henry Hoke: I love that Sumarr is broken up by musical performance; it highlights the musicality in the readings and the literary quality in the songs, and allows for the meeting of genres that's so crucial in our community. ENTER>text as a concept had been cooking in my mind for our whole two-year stint at CalArts. At our first casual campus reading, Jon Rutzmoser did a piece where he had his hands tied behind his back, so that it became necessary for audience members to come forward to turn his page for him so he could continue reading. With this simple engagement, Jon electrified the moment and pushed past the stakes of a typical reading. My own work strives to hit a similar sweet spot, to mine the performative potential and dormant theatricality in literary work. I find that the content can stand up to (and benefit from) experimentation. Los Angeles has such a wealth of space, and a rich history of “happenings,” and our fellow CalArtian Marco Franco Di Domenico had just founded and built an artist-run, residential gallery. He was looking to host a literary event of a different stripe, and was aware of my commitment to non-traditional approaches. Taking cues from immersive and environmental theater, we decided to remove the seats and the podium and allow guests to wander freely, encountering writers and their work in every nook and cranny of the event. Filling his space with simultaneous performances, so that they occurred in bedrooms, the gallery and beyond, seemed like a perfect way to test this 'reading installation' on a large scale.  From the first meeting I wanted to restrict this event to writers only, to distinguish it from interdisciplinary shows or happenings. We gathered participants and curated their work in the same way one might while editing a magazine, and that's where the idea of our "living literary journal" calcified. 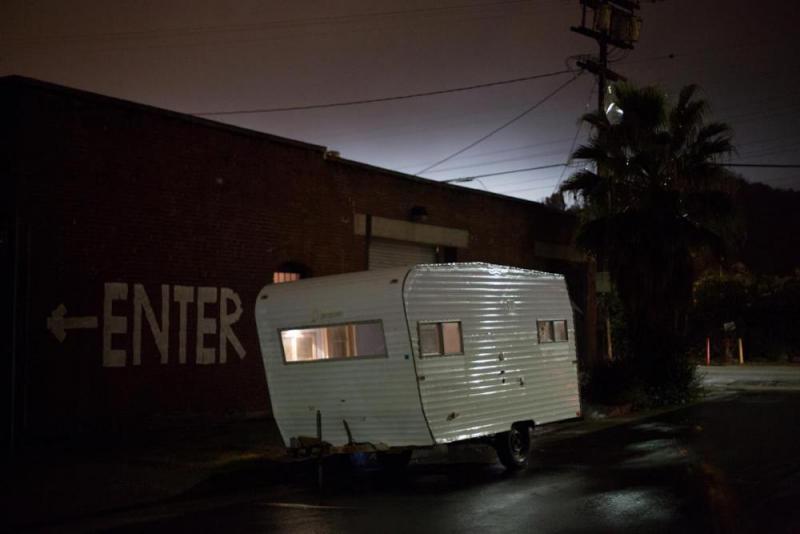 What do you find to be some of the strengths of doing a reading event here?

DA: I never pieced together your history/love for the theater and performance with ENTER>text’s development. Of course someone who loves “Sleep No More” would create something like what you’ve created! The radical take on the accepted form. I think slow/dull “standard” readings happen here in LA, but I don’t experience too too much only because there are so many amazing writers here. I recently participated in a conference in England on contemporary experimental women writers, and everyone was talking about people in LA! Maggie Nelson, Teresa Carmody, Vanessa Place. It opened my eyes in terms of the dumb luck of my being in LA at this moment. The other day I went to an event at Betalevel, a venue in a basement alley in LA’s Chinatown where Amina Cain and Amar Ravva gave lectures on “darkness.”

To answer your question though – I’ve noticed a real shift in the LA literary scene in the last three years or so. So I’ve found the strengths to be the wealth of incredible writers here, and the growing literary community where people are supportive of one another. As I’ve done Sumarr for more and more seasons, I’ve started to get the guts to invite people who, in Sumarr’s inception in 2010, I would have been paranoid about their saying no to my invitation to read. But super exciting authors who I don’t know so well are starting to say yes, and I’m hoping that my 2014 season will involve more people I don’t know personally, but whose work I very much admire. 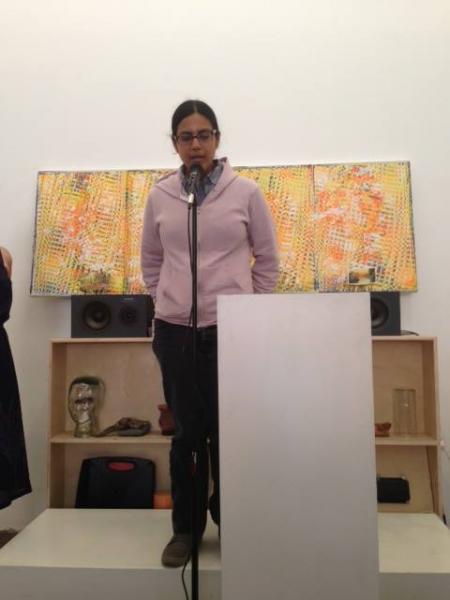 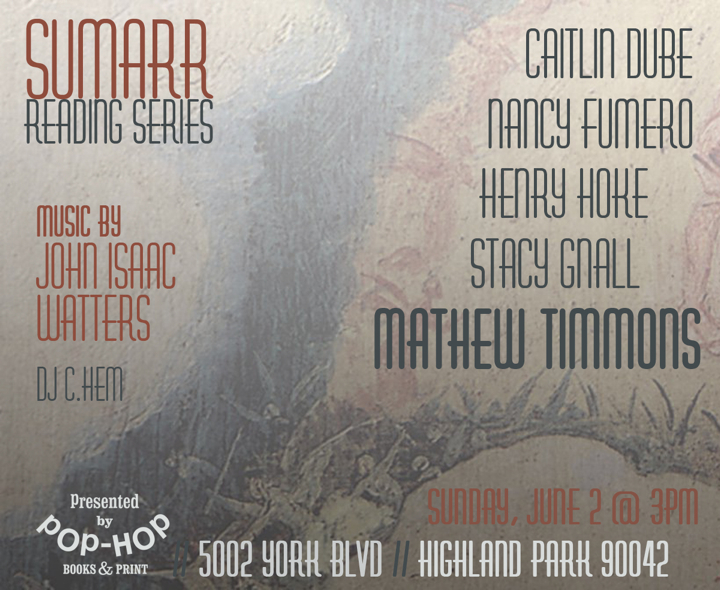 But to get back to ENTER>text – it seems like such a curatorial challenge. What is the biggest challenge in running that crazy thing?

HH: I'm just thrilled that these fantastic writers, who curate and appear at successful traditional reading series, are willing to take the ENTER>text plunge. Participants have done extraordinary work at our shows, shouting down from towers, tying a whole roomful of people up with one string, and doing an intense poetic reading in a bathroom for one audience member at a time. We seek contributors that are, first and foremost, like no one else. Because when you're locked in a room with a writer, that experience of their individual voice is incredibly visceral.

An early issue in curating ENTER>text was realizing how much we were asking of these writers. The "endurance" aspect of conducting prolonged iterative readings throughout the event hadn't occurred to us. Fortunately most participants, despite what we cruelly require, seem to come out the other side exhilarated. The pleasant surprise was how broad our audiences became, thanks largely to Marco's Concord Space drawing people from non-literary scenes, from the art and theater world, and hearing their responses. We've been lucky to build up a base of regular attendees, for whom we also curate more intimate events in private residences.  As we look into mounting the show in wild new locations, Los Angeles feels even more fitting, with its tacky castles and sprawl. 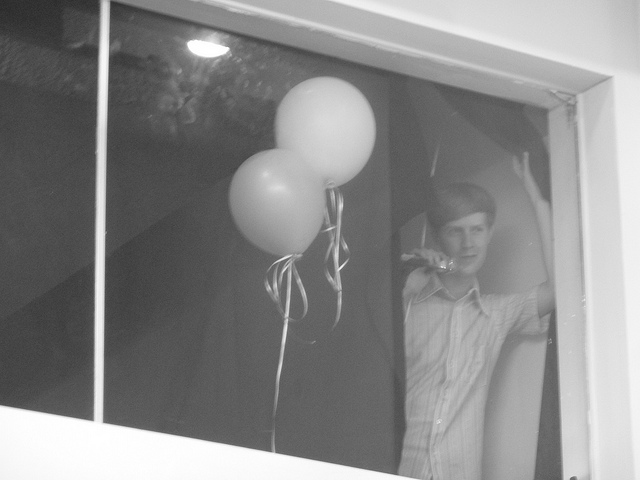 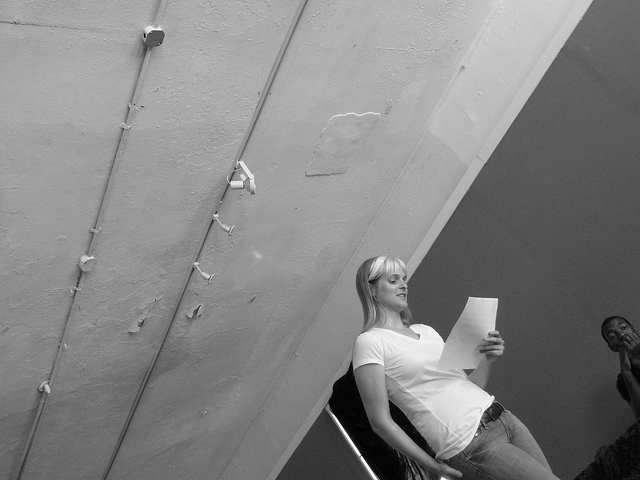