The LA Liberation School was/is a free university project that ran formally for the month of July 2013 in a live/work warehouse on the border of East and South Los Angeles. It has since transformed into a loose network of reading groups and organizing meetings held in various locations (I have since been away from Los Angeles and so have not been able to participate). Those who facilitated the School's operations tried to create a space that would escape the segregation that characterizes other public education projects and to create material practices to hold better space for thinking. Recurring classes included Community Organizing, Creative Writing for Resistance and Liberation, Feminist Radicalism in the US: 1969-1980, and Gentrification and Resistance, and one-off workshops focused on Border Militarization and Resistance, Community Accountability Process, Design, and a range of other practices and skills.  The direction that the school will now take is in the hands of its present and future participants, insofar as the school is no more or less than the collective practices and decisions of the people it involves at any given time. It was in this spirit that I agreed to run a reading series – it seemed like the best use of my skills and contacts given the somewhat limited time that I had available. In this sense, the inclusion of a poetry reading was not a "necessary" component of liberatory activities – it was, like all of the liberation school projects, a reflection of the skills and interests of the people who were willing and able to plan activities (in this case, that's me). All of this is to say that the inclusion of a reading series was the product of a set of contingencies rather than a collective vision demanding that our liberation must include poetry. At the same time, I was not the only one interested in having readings and performances, and so Red Shout! was not simply an expression of my individual idiosyncracies – other organizers agreed that it should happen and were grateful, I think, that I was willing to coordinate it.

The format for Red Shout! was fairly standard: between one and three featured readers performed for approximately twenty minutes each, after which we had an open mic based on a sign-up sheet that circulated. The featured readers came from a variety of places (some LA locals, some out-of-towners); in all cases, they were there because I, as facilitator of the event, had invited them to perform. This meant that the featured portion of the readings was very much shaped by my own network of contacts and by my tastes, rather than emerging from the relationships and solidarities that were forged during the month of activities at the Liberation School. The open mic, on the other hand, tended to include members of the Lib School community. I remain somewhat ambivalent about the hierarchy that this may have produced: "outside" writers were given some pride of place, while regular participants were slotted into the democratic open mic forum. Still, bringing in "outside" readers meant widening the circle of the liberation school, bringing more, and different, people into the warehouse space. As often as not, the group present for Red Shout! (which varied from around 12 to around 30 people) was composed of folks who were not otherwise present at Lib School.  The position of the event at the end of the week meant that it hovered between being part of the school's activities and being a separate reading.

On the whole, the people who came to Red Shout! because they wanted to attend a poetry reading did not then participate in other liberation school activities (with some exceptions). Existing poetry "scenes" were not suddenly drawn into the Liberation School, which may be just as well.  Red Shout! brought together Angelenos who might otherwise not have been in the same warehouse space, but the end of each reading meant the end of that particular cohabitation of our city – an experience with which, I suspect, many residents of Los Angeles are familiar.

Red Shout! featured readers were myself, Olive Blackburn, Harold Abramowitz, Amanda Ackerman, Nellie Wong, Diane Ward, Rob Halpern, and Douglas Kearney. The open mic included repeat performances from spoken-word artist Matt Sedillo and storytelling from Skira Martinez, who runs the warehouse space, as well as, in the final week, a set of readings by members of the Lib School's own creative writing workshop, Will Clark, Erin Conley, Emma Heaney, Adrienne Walser, and many others. 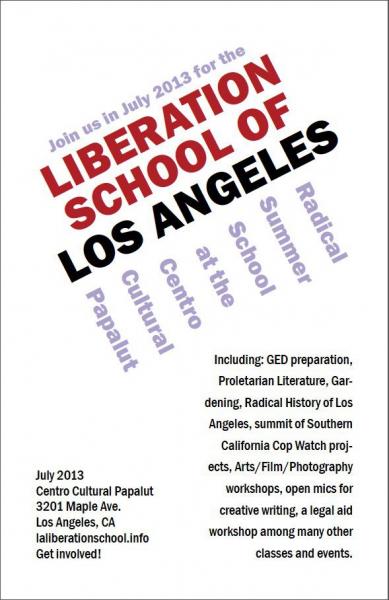