Stanley Burnshaw: The poet in the world

Stanley Burnshaw, one of America’s most versatile, influential, and longlived men of letters, was born in New York City on June 20, 1906, to Ludwig Bernstein, an immigrant from Latvia, and his Russian-born wife, Sonya. Burnshaw (his Anglicized name was taken from an English relative) grew up in Pleasantville, NY, where his father had established an innovative cottage-style orphanage for destitute Jewish children. Ludwig’s philanthropic example deeply impressed his son, as did the communitarian arrangement of the orphanage.

Recently a new author page was created at PennSound for poet, editor, critic, translator, and environmentalist Stanley Burnshaw. The recordings were made available through an arrangement with the Yale Collection of American Literature, Beinecke Library, at Yale University - with special support from Nancy Kuhl.  We are also greateful for permission to make these recordings available given by Robert Zaller as Executor of the Estate of Stanley Burnshaw.

As the symposium has suggested, there are a number of 1960s: a year in which work from the 1950s appeared in print (the physicality of print technologies involving a time lag); a year in which the social and political landscape silenced some, even as what was published has an energy still present in 2011; the year of the New American Poetry, 1945–1960 (the subtitle, worth underlining), by now surprisingly both capacious and ordinary, closed and defying aesthetic

'Escape' and 'The Inhabitants'

For transcriptions of these poems, please visit “Three Poems by Barbara Guest.” 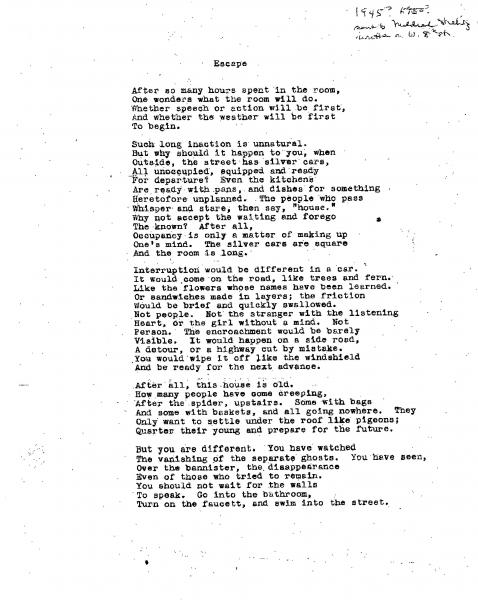 The gendered language of Dadaist dress

In 1922, Jean Heap characterized Baroness Elsa von Freytag-Loringhoven in the pages of The Little Review as “the first American dada … the only one living anywhere who dresses dada, loves dada, lives dada.”[1] This heraldic description, in which dressing, loving, and living Dada interlace, calls attention to the risks the Baroness took as an artist and highlights her radical sartorial imagination. Both manifested in her quotidian performances, which muddled the lines separating art and fashion; clothes and skin; bodies, images, and commodities.