The more the words, the less the meaning, and how does that profit anyone? — Ecclesiastes 6:11

What does poetry do with language? This question, shouted and shrieked by various avant-gardes of the early twentieth century, became increasingly relevant for Russian poets during the Soviet period. In the 1920s and ’30s, many learned that even as poetry uses words to forge alliances and break windows, words in poetry can also cause serious trouble: they can get you fired or exiled or killed. In the slightly warmer but artistically stifled atmosphere of the mid-1950s, the poet Vsevolod Nekrasov (1934–2009) started asking: what can poetry do for words? He was appalled by the Soviet regime’s violent enactment of an absolute break between signifier and signified, and the absolutely false new meanings being institutionalized left and right. Nekrasov spent the next fifty years trying to make words “mean what they say,” while remaining acutely — poetically — aware that words have never had one clear meaning. His project is self-consciously “non-poetic”: his usage is deliberately, documentarily colloquial, his vocabulary limited, and his material quotidian. But the process whereby Nekrasov interrogates the “truth-value” of the language under inspection is fundamentally poetic; this process is also, incidentally, what bridges the poet’s sarcastic, socially critical poems and markedly lyrical meditations on nature and inner life.

A POEM ABOUT CAUSES AND CONSEQUENCES
for Alik Ginzburg

Chatted, had it,
Had it,

In the afterword to the new collection of Vsevolod Nekrasov’s poetry in English (I Live I See, UDP, 2013), the American scholar Gerald Janecek relates one of the times he fell afoul of the poet’s prickly nature. Nekrasov insisted that Janecek withdraw a selection of his poems from the 1992 Third Wave anthology of contemporary Russian poetry because of the involvement of another scholar, Mikhail Epstein, in the volume. Epstein had entered Nekrasov’s long list of sworn enemies after maligning the poet in a 1988 review of newer developments in Russian poetry. Epstein had written:

It would seem that poems like [Vsevolod Nekrasov’s] —lavishly garnished with “like,” “this here,” “after all,” and “well, you know” —could well have been written by Akaky Akakievich. This is the vocabulary of a poor man, a “little man” of our time, stuck deep in a muttering, unintelligible muck made up of bureaucratese, and capable of turning even words like “spring” or “blue” into bureaucratese. They are repeated 10–20 times in a single poem and are themselves transformed into an abstract element of speech, into a conjunction or particle.[1]

Although Janecek chides that this was “certainly an unfair characterization by any measure,” Epstein was not completely off the mark. Gogol characterizes the speech of the protagonist of “The Overcoat” thus:

It should be known that Akaky Akakievich expressed himself mostly with prepositions, adverbs, and finally, such particles as have decidedly no meaning. If the matter was very difficult, he even had the habit of not finishing the phrase at all, so that very often he would begin his speech with the words “That, really, is altogether sort of …” after which would come nothing, and he himself would forget it, thinking everything had been said.[2] 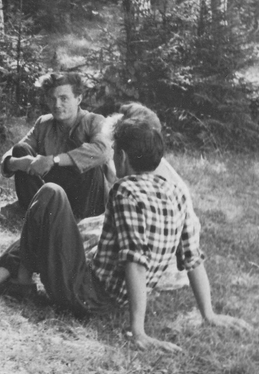 The fact that Epstein has misread Gogol or Nekrasov or both is not our concern here. Regardless of the less-than-kind thrust of his argument, his error actually invites a beautiful explanation of Nekrasov’s poetic project (not to mention his rootedness in the Russian literary tradition). The tragedy of Gogol’s hero is his utter disconnectedness from language as a means of expression. In the spiritual vacuum of a grotesquely bureaucracy-dominated Petersburg, Akaky Akakievich has some kind of vestigial capability to feel deeply, but literally lacks the vocabulary to bring these feelings to action. The problem doesn’t really lie with poor Akaky Akakievich, though. The fact that his words are empty placeholders actually makes him look good next to his more socially graceful colleagues and fellow citizens. Rather than empty, their speech is filled with smooth and shameless lies. Fast-forward a little more than a century, and this is one of the qualities of Soviet official-ese that Nekrasov seeks to overturn:

and again with the
golden words

glory  and glory to us

as per our words

would you all take us

Although the banality and falsehood of official speech were an important impulse for Nekrasov’s work, the scope of his project extended far beyond the physical and temporal borders of Sovietdom. We can see this in the equal attention he paid to everyday colloquial or “neutral” language — Nekrasov recognized that words lose meaning through any kind of automatization, that the nefarious manipulation of language by Soviet authorities is just one of many effective methods for the extermination of meaning. Words repeated one time too many can become synonymous with animal grunts (think of poor Akaky Akakievich senselessly repeating the same meaningless syllables in a futile effort to express his great agitation). Rather than simply representing alienation, Nekrasov’s “grunting” sometimes appears as a depiction of “inward speech,” the half-formed sub-language of thought. Nekrasov is a master at manipulating this kind of language, which is simultaneously dramatically understated and rich in semantic resonances (often to comedic effect).

Nekrasov uses repetition with razor-sharp intention and aggressive curiosity. What happens to a familiar word (and the concept it supposedly represents) when you repeat it over and over again? What does it mean when there is nothing else on the page? For instance, in the case of the poem “nichego/nichego,” consisting entirely of the word ‘nothing’ repeated twice? What happens when the repeated word suddenly comes into contact with other words?

Moreover, Nekrasov never mumbles — for all of its engagement with the “real” and “everyday,” this poetry is not “found” but carefully crafted. The poet’s enunciation is precise to an extreme — his words are not only intelligible, but also often reveal previously imperceptible nuances, performing a kind of demonstrative dissection of automatized meaning.

Nekrasov has been called a minimalist, and there are certainly aspects of his poetry that justify such a term. At the same time — and this is true of other minimalist poets, of course — a minimum of words or an intentionally lean vocabulary by no means imply monotony or poverty of meaning. On the contrary, a concentration of a limited number of words not only invites heightened attention to the words themselves and their position on the page — it can also describe a concrete experience and invite the reader to a similar meditation