Poems and drawings by Lisa Samuels

Traditionally, in Latin American culture, a corrido is a narrative song about the daily life, oppression, or history of a particular community. It is often used during moments of great tumult and transformation, like revolutions. The corrido is both a social and artistic act, written to capture a moment or energy during a significant event — or, even, to convey secret political messages to faraway audiences. In other words, to hear a corrido is to experience a broadcast — to be thrust into the middle of someone’s radiation where exactness or meaning is obscured by rhythm and lyric. But the aura of a corrido, its feeling, is strong and lingering.

To read Lisa Samuels’s latest book, Mama Mortality Corridos, is to be similarly positioned in a state of heightened reception. The book’s rich and fleshy language, accompanied by a selection of Samuels’s two-toned drawings, titillates the senses and forces them alert. These Corridos act more like dreamscapes than political messages, as they scavenge bits of language, earth, desire, sorrow, and violence; for example, the first poem, “Envoi,” opens with scene that seems to have spun out and fractured from another world:

Waking without refreshment, no shine to, no mirror
images. Lopsy tide, then, and the list of
friendly rape in the dreams. My hovers
feet and solves the constant world

Published by Holloway Press in 2010, the collection is an art object. The color of cream and terracotta, the book resembles an artifact of the desert — sunburnt, rich, and full of mirages. The abstract landscape drawings littered through the book are composed of simple figures and shapes depicting their own internal narrative. The images are enigmatic in the way they interconnect — each drawing depicts a shape or body-like figure appearing to travel across a certain horizon — but are equally primal and elemental in their ability to procure a tonal message — transition, desolation, peace. The drawings signal both movement and stasis with simple lines and composition and, despite their simplicity, the images appear to carry a heavy code inside them — much like the corrido itself. Horizon, sun, and body invoke the cycles of life, how they weave into each other, and, like the very title of the book, Mama/Mortality, how two ends of a spectrum are gracefully intertwined. 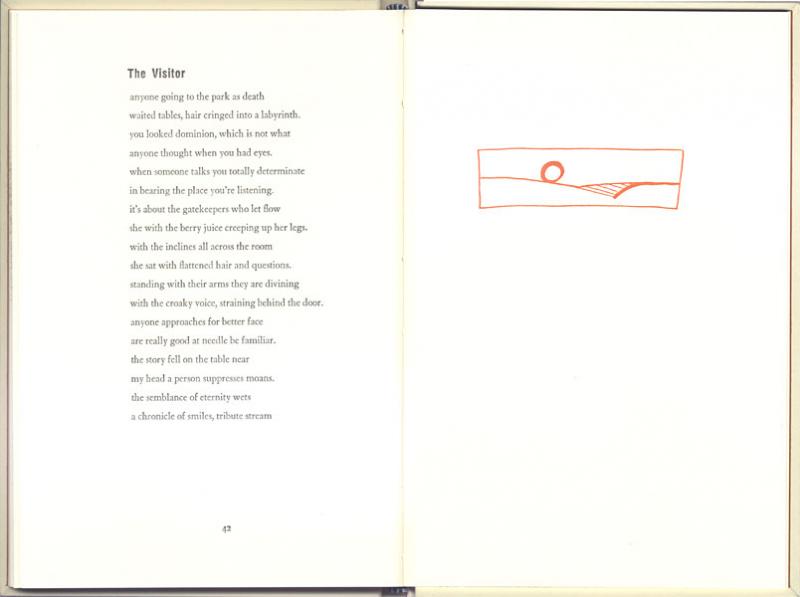 The poetry provides a distinct dynamic to the images — similarly primal but more unrestrained and frenetic. The poems swing wildly through words/worlds — English through Spanish, modern through the historical (many of the poems are composed of old corridos, anthologies, other poems, etc. The last poem being totally evocative of this mélange — a cento of C. S. Pierce.) Nothing acts quite like itself or remains intact — especially her phrases, which are constantly looking out to shatter their own logic and keep meaning spinning. Verbs chase nouns which chase other verbs. From the above poem, “The Visitor,” we find “anyone approaches for better face / are really good at needle be familiar. / the story fell on the table near / my head a person suppresses moans.” Aside from the mystery of the unnamed visitor, who oscillates from “anyone” to “you” to “she” and the indeterminate tense, the perspective is dizzying and operates like churned fragments of the chaotic in-between. I can’t help but think of the dead, of ghosts and how their passing may resemble its own restless corrido.

Samuels certainly seems to be signaling us to a place of passing, if not exactly death — corrido echoing the sounds of its false English friend, “corridor.” Looking at the poem titles (“Envoi” “And passing by a corner” “The Visitor” etc.), it’s obvious, a transition or voyage is taking place. This idea of passage/passing is a similarly significant element to the conventional corrido — as they signal a passing of knowledge between peoples or a passing from one era to another. In Mama Mortality Corridos the passing, the movement between involves a new physics, where the trans(ition) itself changes and transforms the message or object. From “Homily”:

That’s a short middle crawl when I
was dropping my ideas on the pavement
and you picked them up. Given
to triadic points of view you hallucinate
self-import, as though ships could bring you
back remotely. I held and dropped you
senseless as at first

Despite the constant transformations in subject or syntax, these poems are so peopled, so full of the (once) living that I’m forced to consider the human body: the footprints on the land Samuels draws in her images, or the suggested violence upon it. (“She with the berry juice creeping up her legs”). These bodies are not quite whole or there, and I wish I knew more about them and not just the bones they’ve left in these poems. Though, that too seems a crucial point for Mama Mortality Corridos — knowing and coming to are part of the same spectrum that forgets and denies. This circularity is expressed in so many of the poems, and so eloquently in “Monkey” where our speaker writes/drives in circles becoming the car, the radio, the bed, the desire, and back to itself in what seems like a memory or dream of a moment that’s gotten caught in a new type of gravity.

It’s a wild corridor Samuels has created. If the world could be caught before one goes spinning into the grave, it would look like a passage from these Corridos. “She turned to shells those / into blues blue sheels / the water turned to air / and blew heels trembling.” It’s a vortex of a book — and a really delicate one, where we cannot “quite touch the bottom” and probably wouldn’t want to anyway.

On Susan Briante’s 'Defacing the Monument'

Susan Briante’s Defacing the Monument is a hybrid creative-critical text that explores the possibilities for documentary poetics to interrupt injustice.

He who sees and listens
A review of Mark Weiss, 'A Suite of Dances'
Alexander Dickow
Architecture's a verb