In 1968, the year after Debord’s Society of the Spectacle appeared in print, a geographer by the name of William Bunge co-founded The Detroit Geographical Expedition and Institute with Gwendolyn Warren and, along with a group of young “ghetto residents” (Wood 166), undertook a series of experiments in radical cartography. Just as Dadaist, Surrealist, and Situationist artists had begun to experiment with maps, cartographers began to borrow from art in ways that both subtended and expanded the possibility of map-making.

“Radical cartography” is the preferred term of many activist map-makers working today, including Bill Rankin, Hackitectura, the Institute for Applied Autonomy, The Counter Cartographies Collective, Alexis Bhagat, Lize Mogel and others. In their incisive introduction to An Atlas of Radical Cartography, Bhagat and Mogel explain: “[w]e define radical cartography as the practice of mapmaking that subverts conventional notions in order to actively promote social change. The object of critique … is not cartography per se (as is generally meant by the overlapping term critical cartography), but rather social relations” (6). Craig Dalton and Liz Mason-Deese of the Counter Cartographies Collective argue similarly for “mapping as militant research.” “As autonomous, militant research,” they argue, “this mapping aims to foster cooperation among researchers and participants to practically intervene in real problems without attempting to marshal state or administrative power” (439).

Bunge’s pioneering work would prove invaluable. If cartography traditionally mapped outward toward new frontiers of unexplored terrain and colonial expropriation, Bunge’s approach was to move inward toward those pockets of place not un-discovered but overlooked or exploited. 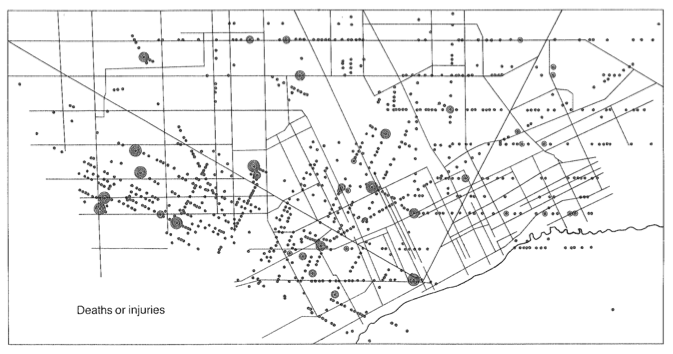 “Citywide Pattern of Children’s Pedestrian Deaths and Injuries by Automobiles.” Reproduced in Rethinking The Power of Maps (New York: The Guilford Press, 2010) 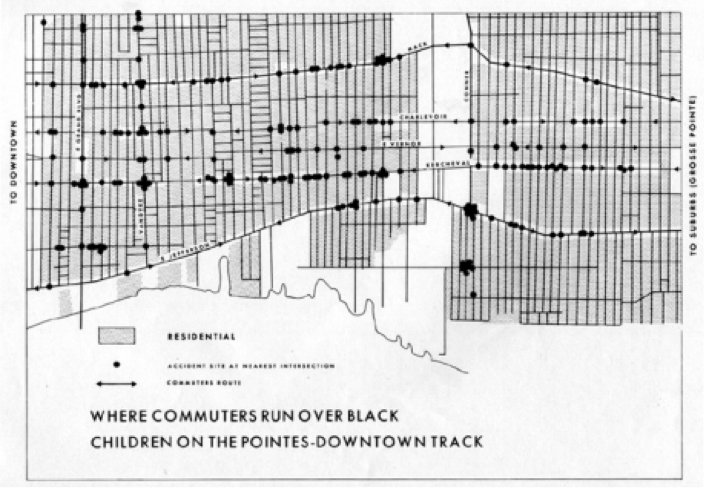 Consider an early example of his work: on view, a police report visualizing child death statistics titled Citywide Pattern of Children’s Pedestrian Deaths and Injuries by Automobiles; next, Bunge’s map, which plots the same statistics, titled Where Commuters Run Over Black Children on the Pointes-Downtown Track. Thus renamed, the protest map documents another consequence of white flight. John Snow’s 1854 map of cholera in London, Charles Booth’s poverty maps of 1899, and the groundbreaking work of the Chicago School of Sociological Research were likely Bunge’s own touchstones. But the title is the work of the consummate Dada trickster.

The surprising thing about the Detroit Geographical Expedition and Institute’s “Where Commuters Run Over Black Children” is not its aim, its methods, or its medium. Like their forerunners—members of institutes like the Royal Geographic Society, founded in London in 1830, the Royal Dutch Geographic Society, founded in the Netherlands in 1873, or the Royal Belgian Geographical Society, founded in 1876—Bunge and his co-workers aimed to advance knowledge by sending teams into uncharted territory to look, measure, and record what they encountered and disseminate their findings in maps, lectures, journals, and books for the enlightenment of a curious public. While the word “expedition” announces the empirical thrust of these societies, the word “institute” acknowledges their social entanglements. Like all forms of representation, maps and counter-maps alike rely on established customs, conventions, organizations, and powers. Authorized by the nations that lent them their names, dignified by royalty who endorsed their mission, and funded by merchants invested in overseas acquisitions and expansions, the work of nineteenth-century geographical societies was to submit “unknown” territory to known laws, powers, and customs. What is surprising about the counter-map produced by Bunge’s coalition of academics and inner-city residents is its out-front, urgent, angry indictment of a form of capitalism sixties activists were just beginning to call “interior colonialism.”

As compact and powerful as a poem, the title of this counter-map describes a systemic split between wealth and poverty, suburbs and the inner city, capitalists and laborers, played out in a daily pageant in which “commuters run over black children” on their way to and from their work.  As upcoming columns will suggest, Bunge’s map anticipates late twentieth-century radical maptivism and the new media affordances that support it, the community activities that surround it, and the tones and tempers that give it its edge.

In similar fashion, and charting the same Detroit inner-city triangle, Bunge and Bordessa’s “Region of Rat-Bitten Babies” uses language to point beyond its cartographic tracings. Like Edward Tolman’s “ratiocinations” on narrow cognitive mapping in maze-running rats, the caption’s hard-edged alliteration carries an accusation. The “accidents” in which Detroit commuters run over black children occur, not coincidently, in the “region of rat-bitten babies”: “individual and social maladjustments,” as Tolman put it, betray “narrowings of our cognitive maps” caused by “regression,” “fixation,” and the systemic “displacement of aggression onto outgroups” (207).

Maps, we maintain, are not innocent presentations of the real. Bunge’s maps register this point exactly. Like the racism plaguing Detroit’s infrastructural and political institutions, the systemic patterns in these maps ask for interpretation. Recalling Bhagat and Mogel’s term, the expeditions of the Detroit Geographical Institute find patterns of “social relations”: a radical cartography of murder sites, pedestrian paths, commuter traffic, and race relations.

Set beside another example from Fitzgerald: Geography of a Revolution, the map of Detroit’s downtown once again loses its presumed innocence, as money moves in the same direction as speeding cars. The Detroit Expedition’s crucial innovation is to inject the Situationist dérive of embodied action into the field of social geography. 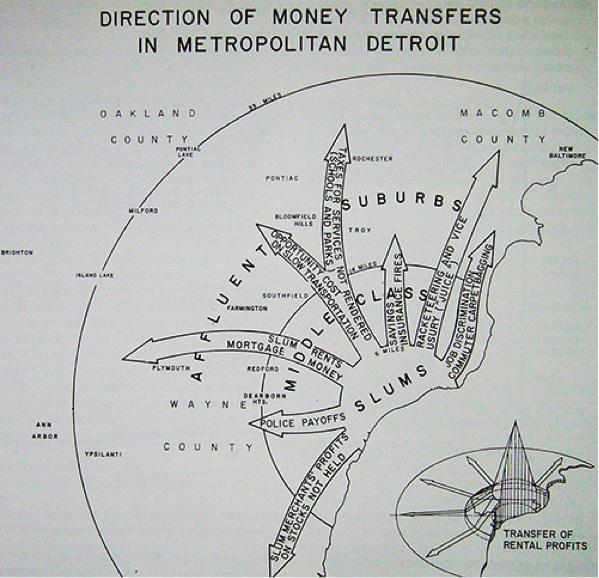 These maps, and numerous like them, were the central focus of a project in experimental urban geography, whereby teams of amateur geographers drawn from the community conducted surveys of Detroit's inner city. Bunge and Warren formed the DGEI in 1968, initially drawing support from Michigan State and Wayne State Universities. Described as “an experimental community college,” the Institute provided free courses to Detroit residents in cartography, geography, community activism, and urban planning. By 1970, the Institute enrolled 500 students in 11 courses, at which point funding was terminated and the DGEI was forced to close. Yet, in this short two-year stretch, the expedition and Institute produced numerous maps. Some were published in book form, such as Fitzgerald: Geography of a Revolution; but equally important was a series of reports directed at community groups and policy makers—chief among these, “a report to the parents of Detroit on school decentralization” (1970) and “the geography of the children of Detroit” (1971). Community groups used the first of these reports to expose systemic racism in the Detroit School Board’s proposed redistricting plans, while the second is just as significant for what the title evokes. Bunge and his colleagues sought to map human activity, and not the earth surface alone. Radical cartography should disturb the assumption that a map is a discrete multiplicity of inert things; it should represent the dynamism of moving actors and the relations they form.

Bunge’s map of child deaths, we should dutifully recall, is also a map of how children play, and the incompatibility of this human activity with unsound urban planning that privileges wealth over safety.

Finally, while William Bunge’s work in radical cartography is typically recognized amongst a relatively small group of social geographers, his influence on journalism today has proven enormous. The possibilities afforded by recent innovations in data visualization tools ultimately draw upon and expand Bunge’s experiments. Consider, for instance, the essential importance of mapping WikiLeaks’ Iraq and Afghanistan war logs and the complex surveillance networks of NSA spying. Crucial developments in GIS, digital imaging, and other increasingly user-friendly applications (such as Harvard’s WorldMap and OpenStreetMap) make it possible for individuals and collectives working without the resources of mainstream media consortiums or government intelligence agencies to visualize large corpuses of data.

Our next post will therefore examine the influence of Geographical Information Systems (GIS), Geographical Positioning Systems (GPS), Satellite Imaging, and the Internet on counter-mapping in the twenty-first century.