What does it mean to describe a map as embodied or a mapping practice as locative?  With the exception, perhaps, of cognitive maps lodged deep in the brain, most maps are scratched, traced, drawn, stitched, or plotted on rock or sand, parchment, paper, cloth, or a pixelated screen.  Every map, if it is to be readable, makes use of a signifying system to locate or fix the position of something in relation to something else.  The map, as the saying goes, is not the territory but an abstraction of the territory, not a place but an idea of place that takes material form to support a plan, route a journey, mark ownership, establish zones, and/or underwrite an ideology.  So why, then, do we identify a cluster of maps that use the affordances of GPS, GIS, and remote satellite imaging as embodied or locative maps?

In her final poem, “Map,” Wislawa Szymborska describes a constitutive separation, a distance between map and viewer that suggests some reasons why post-Enlightenment Western mapping might be thought to have lost its body.  “I like maps,” Szymborska writes, “because they lie,/ Because they give no access to the vicious truth.”  The map, she says, is

Flat as the table
it’s placed on.
Nothing moves beneath it
and it seeks no outlet.
Above—my human breath
creates no stirring air
and leaves its total surface
undisturbed.

This is the bird’s-eye or top-down view, the perspective Michel de Certeau identifies as abstracted, mental, and totalizing (91-3).  Here, as Rita Raley puts it, “a single, neutral observer . . . adopts a line of sight on the horizon that freezes and flattens all before her into a calculable, two-dimensional frame” (132).  The map and its viewer, each occupying half the stanza, co-construct each other as rational, objective, and still.  No air stirs.  “Mass graves and sudden ruins are,” Szymborska observes, “out of the picture.”

If a top-down view creates, in Szymborska’s final lines, “. . . a world / not of this world,” Surreal, Situationist, and locative new media cartography works from the bottom-up.  Like our always-disturbed world, these maps are often collective, contentious, and unsettled in their search for a form that might capture the mutable, multiple, and contingent view from below.  The observers that create and are created by this kind of mapping are performative, embodied, in the thick of things, looking for the entrances and exits Szymborska calls “outlets,” and, like Debord and Jorn, willing, even eager, to get lost.

The gaps in Situationist maps, the time-signature of maps created through GPS or GIS technologies, and the open-endedness of the projects explored in Karen O’Rourke’s valuable book Walking and Mapping: Artists as Cartographers all suggest that bottom-up mapping is never quite completed.  Imagined and/or executed by pedestrian-cartographers, walking maps follow Debord’s “ethic of drifting” (quoted O’Rourke 7).  Their gist is captured in the spirit of two of Yoko Ono’s Fluxus event scripts, both titled “Map Piece,” published in Grapefruit and pursued in projects by artists 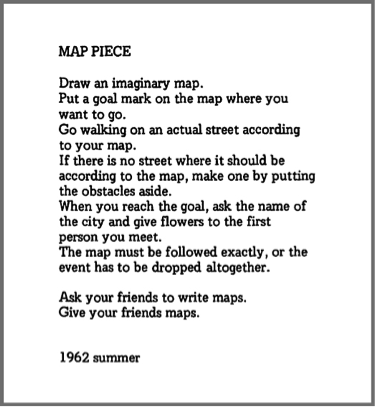 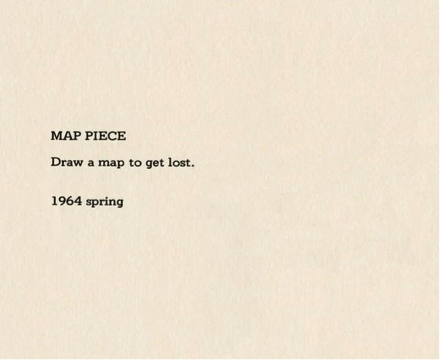 such as Mieko Shiomi, On Kawara, Christian Boltanski, and Bruce Nauman; writers such as Iain Sinclair in London Orbital; and new media poets such as Wilfried Hou Je Bek in his map piece .Walk.

Like Denis Wood’s hand-drawn maps of Boylan Heights in Everything Sings, GIS maps of New York, Berlin, London, or Amsterdam reproduced by Todd Presner, David Shepard, and Yoh Kawano in their book HyperCities, Jeremy Wood’s Meridian GPS drawings in Janet Abrams and Peter Hall’s compendium Else/Where, and the forensic maps that are the topic of our next commentary, these are “thick” or “deep” maps,[1] extensible and polyvocal, products of an ongoing practice of collecting, aggregating, and visualizing ever more layers of geographic or place-specific data.

As this list of examples shows, the difference between top-down and bottom-up mapping is not technologically determined: many hand-drawn or print maps are as multiple and contingent as the Situationists’ Paris or Wood’s Boylan Heights, while many digital maps appear to be as flat, frozen, and definitive as Szymborska’s “world/not of this world.”  What is striking about contemporary developments in mapping, however, is the way in which GIS, GPS, and remote satellite imaging seem to have intensified the divide between top-down and bottom-up mapping, between rational, objective, and scientific representations of fixed space, on the one hand, and experiential, phenomenological, and humanistic representations of lived space, on the other.

As Jordan Crandall forcefully demonstrates in his essay “Operational Media,” contemporary mapping technologies originated in, proliferate through, and flourish in response to the needs of the military-industrial-entertainment complex.  GPS, GIS, and remote satellite imaging are engines of calculations and strategies designed to wage war, sell products, and stage simulated spectacles.  Fundamentally about acquisition, Crandall argues, this “operational assemblage” is

fueled by the demands of efficiency and vigilance, moving toward real time engagements and continuous, heightened states of alertness and preparedness, whether for protection or libidinous consumption.  It is not only driven by security and productivity, but . . . convenient access to desired objects.  As a technological-semiotic support, it blends combat and commodity, functioning as a link between war and consumerism.

Because we inhabit a world in which every person, product, and process can be watched, monitored, and tracked, “thick mapping” has, as Presner, Shepard, and Kawano point out, “an underbelly of unmitigated paranoia and unchecked control” (17).

But, as Szymborska implies, that’s not—or doesn’t have to be—the end of the story.  “Thick mapping” also works from the bottom up to tell other stories: it can be used, that is, in radical cartography, forensic mapping, and new media poetics not only to expose “mass graves and sudden ruins” but also to imagine counterforces to pervasive surveillance and control.[2]

If Wood is correct in his hypothesis that pre-digital traditions of counter-mapping show us one direction in which the discipline of mapping is headed, Paula Levine’s locative media poem shadows from another place: san francisco <-> baghdad (2004) suggests acts of imagination that can be accomplished with the affordances of GPS, GIS, and high-resolution satellite surveillance systems. 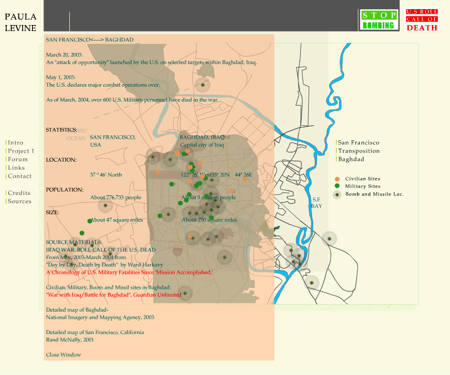 Too briefly described, Levine’s poem superimposes the pattern of bombs and missiles dropped on Baghdad on March 19, 2003, the first day of the U.S. invasion, on a georectified map of San Francisco, where she had listened, in real time, to radio reports of the invasion.  “This was the feeling I had . . . ,” Levine writes: “I expected to feel the impact, hear bombs, feel shock waves, see bright lights in the sky outside my window similar to those described on the radio”:

Thousands of miles separated the site of the invasion from where I sat witnessing, and the only things that seemed fixed were the relative positions of perceiver and perceived and the impossible conjunction of both presence and absence.  Two things became apparent.  First, a spatial fear—a disjuncture, disorientation, and a sense of being unsettled. . . . Second, in spite of being immersed in information, I wasn’t able to get it.  (Transposed Space 4)

In an act of witness and identification, Levine’s new media poem uses contemporary mapping technologies to reproduce the sensation of dislocation, information discord, and geographic estrangement. 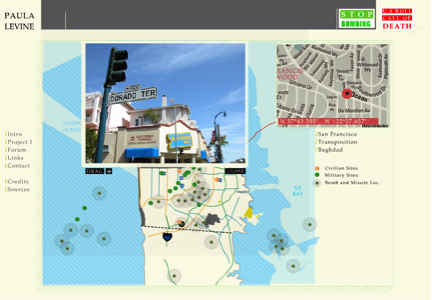 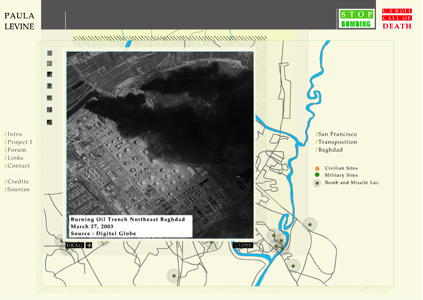 “San Francisco <- -> Baghdad” is, importantly, both locative and embodied.  As Rita Raley explains, the term “locative” applied to new media poetics “comes from a workshop hosted by a Latvian media arts center (2002) and is said to derive from the locative noun case in Balto-Slavic languages (akin to English pronouns ‘in,’ ‘by,’ and ‘on’)” (125).  Levine’s poem superimposes there and here to transpose the narrative of war into or onto the terrain of American life: in this poem, the bombing happens in, by, and on the world we inhabit.

The superimposed maps of Baghdad and San Francisco are bundled with recorded ambient bombing noises, paratexts that record the latitude and longitude of both cities, a timeline, a forum for debate, a button we could click to STOP BOMBING, at least in an ideal world, and, in a real world, for pedestrians who traverse San Francisco carrying Levine’s map, geocaches at targeted locations that contain the names of U.S. service personnel killed in the year following President Bush’s declaration of the end of major combat operations.

“San Francisco <- -> Baghdad” uses radically new forms of visual knowledge to collapse the binaries—here and there, us and them, foreign and domestic—that produce and sustain a rhetoric of war consumed by the American public as a spectacle with no more consequences than a video game.  Along with the counter-maps drawn by Debord, Jorn, and Wood, this cognitive and affective mapping recasts the everyday and familiar: it is, as Jameson had hoped, at once poetic, pedagogical, and political.  The radically embodied and localized forms of this new media poem construct for individual subjects—makers, players, pedestrian re-enactors, citizens—the possibility of an ethical position in the local and global systems that compose our world.

[2] See, among many possible examples, Mogel, Weizman, O’Rourke, and Kurgan.