Like the term eco-poetics, eco-mapping draws its discursive power from the oikos, whose etymological traces are manifest in both the ecological and the economic. We use it to signify a bio- rather than an anthro-pocentric approach to the complex relationships between cartography and planetary ecosystems. We agree with Donna Haraway that it is the capitalocene, and not the anthropocene, that figures the threat of mass extinction for all biotic and abiotic life. We need not return “to deep time and the end of the last ice age” to make this claim efficacious or, as Haraway argues, advance

the notion that human versus nature is as old as our species itself.  Stark nonsense. But we do need to go deeper in time than the mid-eighteenth century. I use this slide [figured above] simply to signal the formations of markets and accumulations of wealth in the great trade routes, many of which figured China as a major player and the Indian Ocean as a major player. I do this simply to signal that those metabolisms of the oikos and ecos — of economy and ecology, and of worlding and of trading and making need to be figured older than the mid-18th century, and that does not mean going back to some deep ecology.” (“Staying with the Trouble”)

Hence we begin with two assertions: first, the human is one element in a “multi-species being-with” that comprises and composes the continuous “worlding” of our planet. Second, it is capital that must be counter-mapped.

To this end, the term eco-mapping makes numerous conditions visible, among them

Eco-mapping crisscrosses a range of cognitive, embodied, and tactical approaches to counter-mapping, some of which we have discussed in previous posts. Consider once again Vik Muniz’s WWW, this time in conjunction with Eric Paulos’s Participatory Urbanism:

This basketball-court-sized world map is an installation that consists entirely of junked computer parts. As we noted in our post on tactical mapping, Muniz’s triptych makes short work of the already clichéd (and pastoralizing) talk of cloud computing. As Voyce wrote with Barbara Eckstein in 2014, “electronic devices are only as innovative as the means of generating electricity to run them, the use of water to cool them, and the disposal of them when we replace them.” Sprawling data centers and server farms “run 24/7, consuming energy on a sublime scale. Between 2000-2005, the energy needed to power the Internet doubled. Between 2005–2010, it jumped another 75 percent … Estimates place global output at 30 billion watts of electricity per annum (approximately 30 nuclear power plants or the equivalent generation from coal).” Compounding the issue, a 2012 World Bank report signaled an increase of “e-waste” from 1.3 to 2.2 billion tons. “To date,” they note, “the U.S. has refused to sign the Basel Convention prohibiting countries to outsource e-waste to the developing world.” 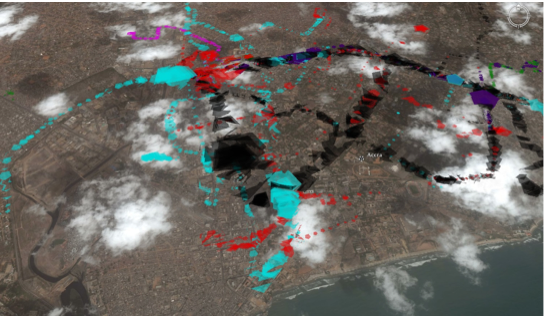 The artists collected environmental data with the intent to exhibit citywide pollution levels. Yet, given the volume of dense pollution located above poor neighborhoods, the map’s air quality metric undoubtedly reads as starkly class-driven as Bunge’s map of rat-bitten babies in Detroit. Paulos and his colleagues align environmental and social justice causes, by linking the measure of overall habitable wellness for humans with poverty levels. This shift in thought is more in alignment with the international community’s three pillars of sustainable development, which proposes that economic, environmental, and social concerns must be identified and balanced to build a foundation of sustainability.

Simon Elvins titles his braille map of the city “Silent London.” The UK government records the city’s noise levels in order to meet European Union noise regulations. Elvins uses their data to identify the most silent areas of the city, marking these neighborhoods with variously elevated and concentrated braille dots. We expect maps to be visually abstract; here Elvins’s “sound map” invites interaction through touch.[i] 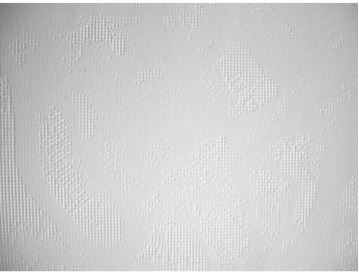 Jeremy Mendes and Leanne Allison’s award-winning interactive web documentary Bear 71 chronicles the life of a grizzly bear in Canada’s Banff National Park from the moment it is tagged, collared, and monitored. The story is told in the first-person by the mother Grizzly Bear, while it is visualized as a series of data points and surveillance camera footage. The narrative builds an ingenious assemblage of public records, mapping a wired wilderness ostensibly built to protect wildlife and their natural habitat. 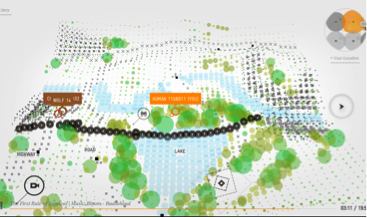 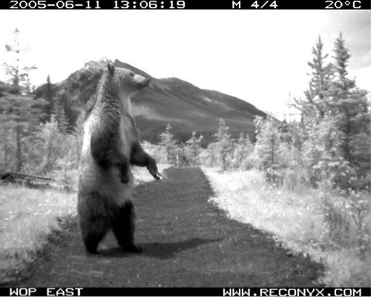 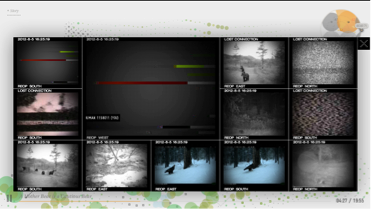 Anthropomorphism is a vexing discourse for many scholars working in animal studies. The attribution of human traits to animals reflects a tendency to locate human agency beyond our species. Yet, scholars such as Marc Bekoff, Frans de Waal, Donna Haraway, Steve Baker, and Greg Garrard argue that a “critical anthropomorphism” (Garrard 154), if employed cautiously, can usefully illuminate the social world of animals — in regards, for instance, to play, child-rearing, family dynamics, and the like. Notably, when viewers enter the gamespace of Bear 71, humans too are tagged as we enter into and maneuver through the digitally rendered representation of the park.

No doubt many examples of eco-mapping conjure the weather map, ubiquitous in our everyday lives informing how we experience and undertake work, travel, and leisure. Weather maps can be powerful educational tools, though we must be mindful of their role and place in establishment media.  Consider that 2013 saw record breaking global carbon emissions (exceeding 400 parts per million), sea levels hit a record high, while extreme temperatures accounted for severe wildfires and flooding worldwide. Yet, according to a study published by Fairness and Accuracy in Reporting (FAIR), network television reports on extreme weather events failed to mention “climate change” 96% of the time. 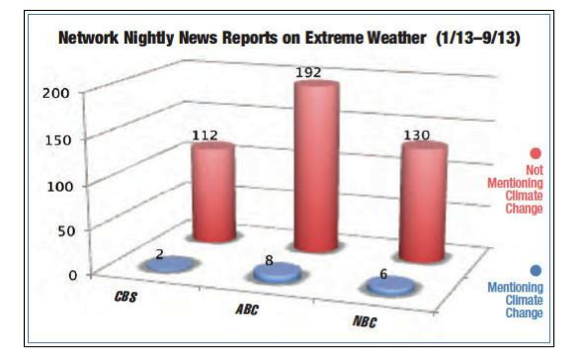 FAIR researchers conclude “that when weather is the news, the climate is seldom mentioned … It’s almost as if the climate and the weather were happening on two different planets.” The weather map is often anthropocentric insofar as it largely exists to determine to what degree it will either pleasure or inconvenience us, while the fossil fuel lobby enjoys undo influence over public policy and media coverage.

Poetry is and will continue to be tasked with the difficult social work of undermining language as a homogenizing, standardizing instrument. In the wake of what Kim names “ecological deracination” — the forced uprooting of humans, animals, plants, and even languages from their native environments — it is the work of poetry (and other tools for linguistic innovation) to uncouple language and narration, make critiques of “mono-lingualism,” and, ultimately, reanimate language as an “unfolding.” In deracination’s aftermath, Kim argues, it becomes our urgent task to strive for a transformative, translocative poetics.

Here we encounter an urgent conversation between poetics, ecolinguistics, and (counter-) cartography. In an essay for Jacket2, Jonathan Skinner also observes that ecopoetic exploration has employed “situationist work [that] engages the dérive of research, turning the compass … toward unknown outcomes”:

The unknown can emerge as much from standing one’s ground as from pursuing detours, and some of the poetics in this direction emerges from an explicitly activist stance, literally placing or displacing poetry into public space and other less evidently poetic contexts, such as governmental hearings, farming, or architecture. (“Conceptualizing the Field”)

Indeed, both eco-poetics and eco-mapping undertake embodied, locative, and documentary approaches to language in their various environments. These productive lines of inquiry offered by Hume, Osborne, Ronda, Kim, and Skinner find common cause with a rawlings’s Gibber: 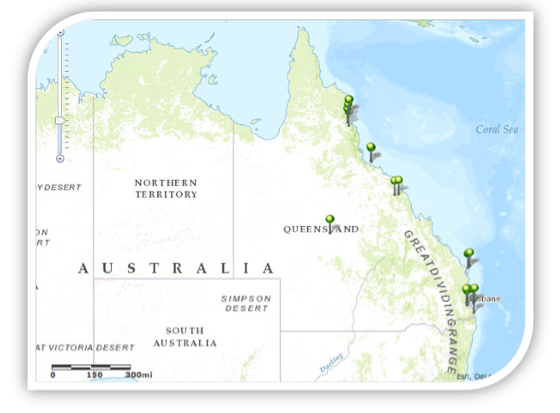 Gibber is an expansive online museum of sound, imagery, written language, and site-specific performance meant to chronicle the author’s time living in Queensland, Australia. In Gibber, photography, audio recording, and the written word converge in a multi-media environment blurring the boundary between visual poetry, sound poetry, performance poetry, and the “non-poem.” As we have emphasized in these columns, counter-maps defamiliarize the relationship between language and landscape, examining the colonial impulse in cartography, while inquiring whether we might “converse” with landscapes in an altogether different manner.

rawlings approaches an unfamiliar bioregion the way one might approach a foreign language. “Immersion in foreign bioregions,” she explains, “heightens [her] capacity to sense environments partly removed from the immediate superimposed semantics [she] has inherited.” “Gibberland” collects, sorts, and pins 1440 anglicized Queensland names containing the word “land.” Each word is then printed on a transparent label and used in “site-specific performance to juxtapose the act of naming with the places represented.”

rawlings proposes an “asemic writing” of eco-poethical forms that acknowledges the ways biotic and abiotic entities contribute to the creation of verbal and visual forms of knowledge production. “[A]sserting that landscapes are passive texts waiting to be actively engaged by readers is ethically perilous.” Yet, “[i]f we hover for a moment … with the notion that an environment can be interpreted (read), then the implication is that the environment itself is comprised of (or, better yet, actively composing) meaning (possibly as a written text)” (“Asemic Writing”). The environments of which we are a part co-author the texts we write. 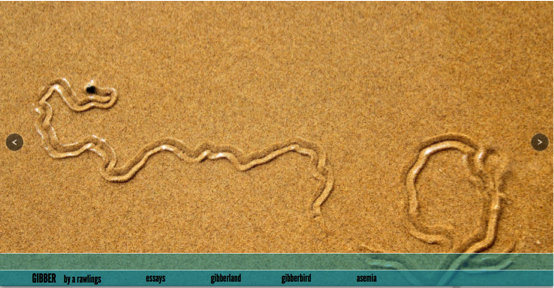 If the map delimits borders, property, and resource extraction, then eco-maps must disturb the anthropocentric, market-driven expropriation of nature. No doubt maps have been party to a pastoralizing enterprise to survey and domesticate the natural world. It is no coincidence that early cartographers labeled those parts beyond known boundaries with the phrase “here there be monsters.” Eco-mapping, then, does not imagine the environment as the preserve of capital, nor does it draw rigid borders between humans and animals or between natural and cultural spheres. Here, we map complex and overlapping ecosystems, while confronting the challenges of climate change, species extinction, urbanization, and disaster response.

[i] Like many working in eco-poetics, sound, and art practices, Elvins’s map suggests a debt to composer R. Murray Schafer’s pioneering work in acoustic ecology. See The New Soundscape (1968), The Tuning of the World (1977), and A Sound Education (1992), among numerous other works.