By the early 1920s, many of the Dadaists had moved on from their former centers of activity in Zurich, New York, Berlin, and elsewhere, while Paris had once again become a hotbed of artistic activity. The Surrealist Map of the World first appeared in a special issue of the Belgian periodical Variétés in 1929.  “Le Surréalisme en 1929” featured works by René Crevel, Paul Éluard, Louis Aragon, Robert Desnos, and André Breton alongside Belgian writers and artists Paul Nougé, E. L. T. Mesens, and others.

Denis Wood suggests that Éluard likely made the map. In 1924 he had toured Southeast Asia and parts of Indochina, where he encountered appalling colonial violence committed by Dutch and French powers. Wood explains that “Éluard had recorded his route on a map, Les Cinq Parties du Monde, Planisphère, Comprenant toutes les Possessions Coloniales, a classic of the era that displayed, on a Mercator projection, English colonial possessions in yellow, French in pink, Dutch in orange, Italian in mauve, and so on” (199).  If Wood is correct that maps “blossom in the springtime of the State” (15), then the counter-map’s first appearance in the early 20th-century avant-gardes announces an unequivocally anti-colonial project.

A short piece by Sigmund Freud, entitled “L’Humour,” offers an especially fitting introduction to the Surrealists’ hallucinatory redux of the Mercator projection.  Humor, we are told, “is not resigned; it is rebellious. It signifies not only the triumph of the ego but also of the pleasure principle, which is able here to assert itself against the unkindness of the real circumstances” (163).  The passage illustrates why an entry on humor should launch a “petite contribution au dossier de certains intellectuels a tendances revolutionnaires” (Variétés, Table of Contents). For humor renders absurd what the map purports to offer as an unproblematic representation of the real.

If the Surrealist map is a subjective projection (anticipating memory maps like Jake Barton’s City of Memory and Tim Roeskens’s Videomappings: 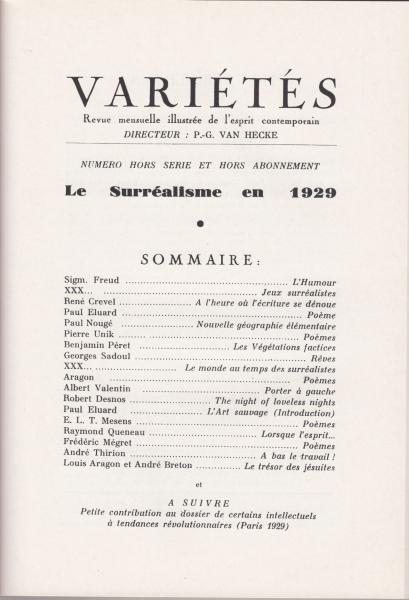 Aida, Palestine), then one should dutifully recall that, of course, any 3D projection of a sphere onto a 2D plane distorts scale, shape, and other essential metric properties of maps.  For instance, many variants of the Mercator projection make it seem that Europe is approximately the size of South America or that Greenland approaches the size of Africa. (In actuality, South America is twice the size of Europe, while Africa is more than ten times Greenland’s size. Interested readers might compare the Mercator’s use in nautical exploration to the Peters projection of land distribution for a clearer picture of things.) If maps are arguments, then there are certainly many of them.  One reporter for the Geography periodical Directions Magazine complains: “Mercator projections present a surrealistic view of the world that makes them inappropriate choices for use in classrooms”!

Three points of immediate interest are likely to captivate the viewer of this map.  First, the equator deviates from a straight line. Second, the Pacific rather than the Atlantic occupies the center of the drawing, thus banishing Europe (and its ethnocentrism) to the edge of the page and the end of the earth.  Third, North America has meanwhile been swallowed up entirely by Alaska and Labrador.  There are other mischievous deformations: for instance, Easter Island looms large, Ireland towers over England, while Paris has become the capital of Germany.

Like their Dadaist counterparts, Surrealist artists and writers employ the map in direct opposition to those cartographic deformances sanctioned by colonial enterprise, warfare, and the globalizing project of modernity. A world map—if it were accurate—would have to account for perpetually shifting border disputes and land grabs.  The French and Belgian Surrealist contingents first charted their common cause in a 1925 manifesto, “The Revolution First and Always!” (The majority of those featured in Variétés were among its signatories.) “The world,” they declare, “is a crossroads of conflicts”:

Even more than patriotism – which is a quite commonplace sort of hysteria, though emptier and shorter-lived than most – we are disgusted by the idea of belonging to a country at all, which is the most bestial and least philosophic of the concepts to which we are all subjected.  (201)

Still, Breton and company champion a more optimistic view of international struggle than, say, the Dadaist Tzara’s signature nihilistic wit: civilization, Tzara insists, is “still shit, but from now on we want to shit in different colors so as to adorn the zoo of art with all the flags of all the consulates” (“Monsieur Antipyrine's Manifesto” [1916]).  France had in 1924 joined Spain’s colonial repression of the Berber rebellion in Morocco’s Rif region, while the specter of World War I was still very much present in Europe’s devastated cities. This incursion by the French state would prompt the Surrealists to consolidate ties with the French Communist Party (PCF).  In Belgium, this union forged more seamlessly, as their chief provocateur Nougé also founded the Belgian Communist Party. The manifesto’s authors maintain their resolute opposition to nationalism and imperialism: “we vigorously and in every way reject the idea of this kind of subjugation … for us France does not exist” (202). And, voila, it vanishes in The Surrealist Map of the World, or else it is merely interchangeable with its former WWI enemy. Accordingly, Ireland’s imposing stature next to a puny England makes sense, as does an out-stretched Soviet Union in the wake of the 1917 Russian Revolution.

A shrunken southern hemisphere is more difficult to explain. The 1927 issue of La Révolution Surréaliste includes an excerpt from Freud’s The Question of Lay Analysis: “If someone talks of subconsciousness, I cannot tell whether he means the term topographically – to indicate something lying in the mind beneath consciousness – or qualitatively – to indicate another consciousness, a subterranean one …. The only trustworthy antithesis is between conscious and unconscious” (198).  Freud’s rebuke of topological metaphors notwithstanding, the Surrealists would certainly have loved the wealth of visual puns the cartographic imaginary develops. Just as the global South is negated (un-), a depository of the colonial North’s desire, fantasy, taboo, and trauma balloons in equal measure.

The preferred English translation of The Surrealist Map of the World lacks the original’s emphasis on temporality.  Matthew Gale, for instance, opts for a more literal translation: World At The Time Of The Surrealists. Indeed, Surrealist time is subjective and pliable; “we are not ‘utopians,’” they maintain, but insist that the borders between nation states—like the lines drawn on paper by generals and venture capitalists—can shift, disappear, and reconstitute future relations. As we shall see in the next commentary, notions of time, embodiment, and the mischievous repurposing of traditional maps prove essential elements of counter-mapping experiments by the Situationists, Guy Debord and Asger Jorn.

---. An Autobiographical Study, Inhibitions, Symptoms and Anxiety, The Question of Lay Analysis and Other Works. The Standard Edition of the Complete Psychological Works of Sigmund Freud. Ed. James Strachey. Vol. 20. London: Hogarth Press, 177-258