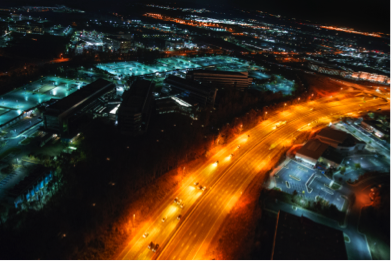 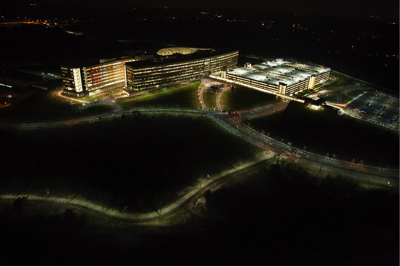 Paglen notes how countless articles in the wake of the Snowden disclosures still featured “a single image supplied by the agency, a photograph of its Fort Meade headquarters that appears to date from the 1970s.” The purpose of his project, he explains, “is to expand the visual vocabulary we use to ‘see’ the U.S. intelligence community”:

Although the organizing logic of our nation’s surveillance apparatus is invisibility and secrecy, its operations occupy the physical world. Digital surveillance programs require concrete data centers; intelligence agencies are based in real buildings; surveillance systems ultimately consist of technologies, people, and the vast network of material resources that supports them. If we look in the right places at the right times, we can begin to glimpse America’s vast intelligence infrastructure. (“New Photos” web)

In I Could Tell You But Then You Would Have to be Destroyed by Me (2008), Paglen collects patches and other visual insignia associated with US military forces, only these patches signify units, projects, and missions related to the so-called “Black World”: 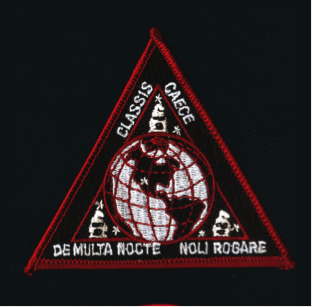 Many of these emblems feature an enclosed globe presided over by menacing figures. The text reads: “Secret Squadron,” “Deep in the Night,” “Don’t Ask Questions.” The Ghost Squadron is an obscure helicopter security and rescue outfit that backs units flying classified aircraft. The star likely represents the squadron’s base of operations near Groom Lake in the Nevada desert. Rebecca Solnit notes in “The Visibility Wars” that “a large portion of Nevada was given over to the military, and civilian mapmakers often left these sites off their maps” (6), producing blank spots instead. The contradiction is obvious: these patches represent units that don’t officially exist; they proudly boast of operations that have never ostensibly happened; they are visible markers of invisible places, people, and acts.

While much of this work is visually arresting, arguably Paglen’s most radical gesture—and the one most important to what we here call counter-mapping—is more expository than graphic.  Maps such as “Selected CIA Aircraft Routes” (pictured above) and Terminal Air (produced with Institute for Applied Autonomy) are useful aids insofar as they visualize dense volumes of information. Echoing Mark Lombardi’s Global Networks, they are nonetheless best read in conjunction with Paglen’s book projects called Torture Taxi (2006) and Blank Spots on the Map (2009), in which he meticulously maps CIA rendition flights to and from a network of secret prisons throughout the world. (Take note of the publication dates. Paglen’s work accurately documents programs and practices later confirmed through the US Senate Select Committee on Intelligence’s own “Torture Report.”)

Anticipating our next two posts on locative media and forensic mapping, Paglen’s journalistic works rely on site-specific evidence-collection, including wading through a dizzying paper trail of flight plans, commercial leases, and witness reports. His work takes him to a civilian airport in Smithfield, North Carolina, a law office in Suburban Massachusetts and the “Salt Pit” black site in Kabul, Afghanistan. “[T]o capture the feeling I had when I first started following CIA flights” from places like Tulsa, Las Vegas, and Fort Lauderdale, he explains, the maps he produced with John Emerson and IAA “try to show a continuum between the domestic landscape and the landscape ‘somewhere else’[,] … that the ‘darkest’ spaces of the war on terror blur into the everyday landscapes here ‘at home’” (45). We err in thinking these worldwide locations are separate geographies. The CIA torture program is, in fact, a collaboration between public officials, private citizens, and military personnel.

Part of what Paglen calls “experimental geography” amounts to a Situationist drift across the most guarded terrains on earth. The covert systems of power disclosed most recently by Edward Snowden—systems that actively conceal the geography, economics, and activities of the agencies that come under their purview—overlap the systems Paglen maps, including the NSA’s complex web of surveillance programs, the NRO’s operation of US spy satellites, and the NGA’s interpretations of geographic information that is then coordinated with surveillance data collected by other agencies. Together the NRO and NGA are the State’s cartographers, working in the black world, with access to untold funds from the black budget, supporting CIA-directed black ops, whose illegal rendition program carts people like Mohamedou Ould Slahi to face torture in Kabul and later at Guantánamo. The former prison, it should be said, is known informally among detainees as the Dark Prison.

Paglen, “Experimental Geography: From Cultural Production to the Production of Space.” The Brooklyn Rail 06 Mar. 2009. Here.

---. I Could Tell You But Then You Would Have to be Destroyed by Me: Emblems from the Pentagon’s Black World. Brooklyn: Melville House Pub., 2008.