In our last post we briefly introduced three closely related terms: “deep-,” “thick-,” and “forensic-” mapping. Each of these concepts expresses the potential of Geographical Information Systems (GIS) to produce maps with extensible, networked, and interactive strata of information.  In their combinatory potential, their dynamic interrelations, and their outward, investigatory ethos, these GIS maps offer a lively and potentially useful parallel with vital strains in contemporary poetry and poetics.

The image above offers a concrete example of the techniques of aggregation, layering, visualizing, and compositing. The geoplatform built by Forensic Architecture, in conjunction with SITU Research and the Bureau of Investigative Journalism, offers spatial data on all known drone attacks carried out by US forces from 2004 to 2014 in the Federally Administered Tribal Areas (FATA) of Pakistan.[i] Users of the digital platform can isolate and/or combine information layers such as target type, location, casualty rates, and timeframe, while each strike can be tagged and sourced to news reports, leaked war logs, and other evidentiary documents useful to journalists, activists, and researchers.

In his essay “The Potential for Spatial Humanities,” David J. Bodenhamer explains that “in its methods deep mapping conflates oral testimony, anthology, memoir, biography, images, natural history and everything you might ever want to say about a place …. [I]ts best form results in a subtle and multilayered view of a small area of the earth.” Deep maps are dynamic, “inherently unstable, continually unfolding and changing in response to new data, new perspectives, and new insights” (27).

The authors of HyperCities: Thick Mapping and the Digital Humanities also describe “processes of collecting, aggregating, and visualizing ever more layers of geographic or place-specific data.” Todd Presner, David Shepard, and Yoh Kawano note that “thick maps are sometimes called ‘deep maps’ because they can embody temporal and historical dynamics through a multiplicity of layered narratives, sources, and ever representational practices” (17), but they urge a critical wariness of depth models. Instead of implying “deep, total, and utopian ‘solutions,’” the term thickness suggests “extensibility and polyvocality: diachronic and synchronic, temporally layered, and polyvalent ways of authoring, knowing, and making meaning.” Evoking pioneering anthropologist Clifford Geertz’s notion of “thick description,” thick mapping “connotes a kind of cultural analysis trained on the political, economic, linguistic, social, and other stratificatory and contextual realities in which humans beings act and create” (18).  If “deep mapping” suggests the mythic drive in T. S. Eliot’s Waste Land, “thick mapping” captures the social, historical, and economic particulars of William Carlos Williams’ Paterson.

Our third term, “forensic mapping” points to Eyal Weizman’s groundbreaking work with Forensic Architecture (FA), a name for both an institute and a mode of critical inquiry. FA comprises a unique collective of architects, artists, filmmakers, and theorists who collaborate to reconstruct conflict zones using an array of maps, geospatial data, satellite imagery, aerial footage, and digital modeling tools. “These technologies,” Weizman argues, “have expanded the capacity to bear witness, but they have also transformed the meaning of testimony, and to a certain extent eroded its sanctity. Today there are many photographers and spectators but only a few witnesses in the traditional sense” (12). The group’s purpose, Weizman explains, is to investigate the violent and illegal actions of States and corporate actors, lending its findings to “NGOs, activist groups, and prosecutors, who have presented them in various legal and political forums” (11).

As Weizman explains, the term “forensis” emphasizes the collective’s desire to articulate—to bear witness to—notions of public truth.  The two constitutive elements of their practice are fields and forums: sites of investigation and places where the results of investigation are presented and contested.  Among the group’s past projects are “Guatemala: Operacion Sofia,” an analysis of environmental violence and genocide in the lxil Triangle; “The Left-To-Die Boat,” which charts the coordinates of a migrant ship in the Mediterranean; and “Bil’in,” a reconstruction of the death of a Palestinian demonstrator via video analysis.  FA’s sites of focus are “frontier zones”—places of murky sovereign jurisdiction and responsibility (e.g., the Mediterranean Sea), where State sovereignty has disintegrated (e.g., Somalia, Yemen, or the FATA-region of Pakistan), or where it has been suspended indefinitely (e.g., Gaza and the West Bank). “In these places,” FA argues, “powerful states can both inflict violence and deny they have done so” (11).  Forensis is the penetration into these zones of contestation.

Weizman, however, advocates for a “counter-forensics” (13).  The prevailing history of forensics is of course the “history of the techniques by which states police individuals.” We see this especially in pop culture representations—detective fiction, the police procedural, film noir, and so on. “We were on the other hand committed to the possibilities of reversing the forensic gaze, to ways of turning forensics into a counter-hegemonic practice able to invert the relation between individuals and states, to challenge and resist state and corporate violence and the tyranny of their truth” (11).  Like counter-mapping, counter-forensics uses the tools of the state—in this case, GIS, GPS, and satellite imaging—to gather and present evidence of state violence, armed conflict, and environmental depredation.

In 2013, Forensic Architecture teamed with the Bureau of Investigative Journalism to produce detailed forensic studies of drone strikes carried out by the United States and Israel. This research formed part of an investigation by Ben Emmerson, the United Nations Special Rapporteur on Counter Terrorism and Human Rights (UN SRCT) of drone operations in Pakistan, Afghanistan, Palestine, Yemen, and Somalia.[ii]  The maps produced for the UN SRCT Report are among the most significant and sophisticated work in counter-mapping design to date: 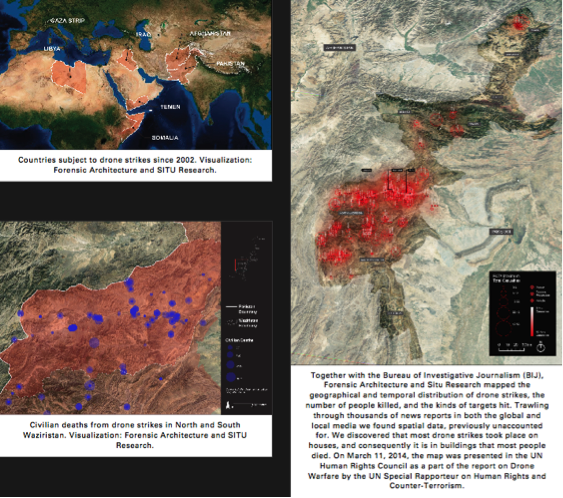 As their maps suggest, their investigation was both a political and an aesthetic practice that involved GIS mapping, 3D modeling, and digitally animating the data they collected, often including eyewitness accounts in site reconstruction projects. In a video documenting their process, a survivor of a drone attack in the Waziristan region of Pakistan can be seen working with an engineer to rebuild a digital model of her home before the attack. 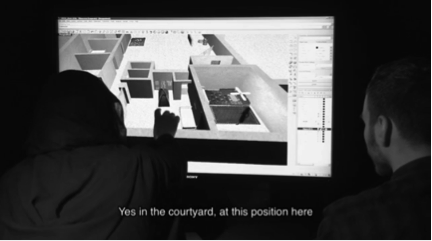 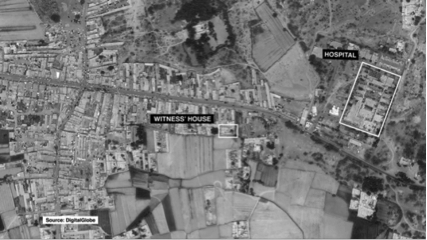 The research team’s main focus is the “spatial” element of drone strikes—“that is, the territorial, urban, and architectural dimension of these campaigns.” This meant compiling and visualizing data regarding the patterns and number of casualties, the location of strikes within urban settings, and the buildings typically the targets of lethal strikes.

This fusion of witness account and spatial analysis is particularly important in regions of the world where social media is either unavailable or heavily censured. Authorities in North Waziristan enforce a strict siege on the region, forbidding entry to nonresidents and any circulation of recording equipment across its borders. In many instances, the information examined in Forensic Architecture’s case studies was smuggled out of the FATA. 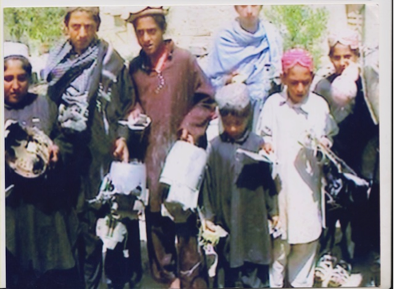 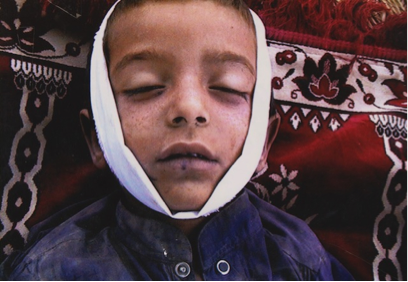 Resident of North Waziristan Noor Behram has spent several years photographing the aftermath of the CIA’s drone war. Photographs of the deceased and materials collected at attack sites provide invaluable forensic evidence tying US Forces and weapons manufacturers to the murder of civilian populations.

Terms like “thick- or “forensic-” mapping offer a critical language to discuss works by Paglen, Levine, Carpenter, and others who combine several facets of knowledge production, a multiplicity of on-the-ground tactical and embodied approaches both discursive and graphic, in the service of what CCC call “militant research.” Call this the theory of zoom.  We propose that this critical language can also be used to describe a forensic turn in contemporary reading and writing that has resulted in the publication of dozens of volumes of evidence-collecting and case-making poetry, poetry that combines aesthetic and political practices in search of public truth and moral accountability.

The forensic turn in contemporary poetry and poetics troubles the distinction between close and distant reading, depth and surface models, micro- and macro-analysis by proposing a tactic of  thick reading.  This expanded poetics zooms in and zooms out, moving slantwise in a hermeneutic for Deleuze and Guattari’s “ideal book”: in its pursuit of a form of creative research, it aims, that is, “to lay everything out on a plane of exteriority of this kind, on a single page, the same sheet: lived events, historical determinations, concepts, individuals, groups, social formations” (9).  The poem understood in this way is a layered, multifaceted object, the reader a surveyor of its networked strata.

In a future post, we offer an extended reading of Caroline Bergvall’s Drift (Nightboat, 2014), a book that embodies the spirit of this forensic shift.  First, however, the parallel practice of eco-mapping.

[i] “The platform is based on data gathered from the database of drone strikes compiled by the Bureau of Investigative Journalism (BIJ). BIJ’s archives of news reports were scanned for information regarding the time, location and type of each target – whether it was on a vehicle, an outdoor gathering or on one of several types of building. This information was cross-referenced with data regarding the number of people reported killed, before being located on the map.”

[ii] The SRCT Interim Report was presented to the United Nations General Assembly in New York on October 25, 2013.