Situationist counter-maps are the product of drifts or dérives practiced by Guy Debord and his companions in post-World War II Paris.  Often collective rather than solitary, of no preset route or duration, and driven by intuition rather than calculation, a dérive is a ritual exorcism of the instrumental, efficient, and ratiocinative life Le Corbusier and other urban planners envisioned for post-war cities of steel-framed, glass-enclosed housing blocks; pre-fabricated, mass-produced office and manufacturing complexes; and networks of ring roads, shuttle stops, and pedestrian “circulation paths” designed to bind them together.

Two maps plot the alternatives as Debord and his allies envisioned them.  The first, a map of the 16th Arrondissement drawn by Debord’s friend Paul-Henri Chombart de Lauwe, traces the routes taken by a student over the period of a year as she circulates between the School of Political Sciences, her residence, and the residence of her piano teacher: 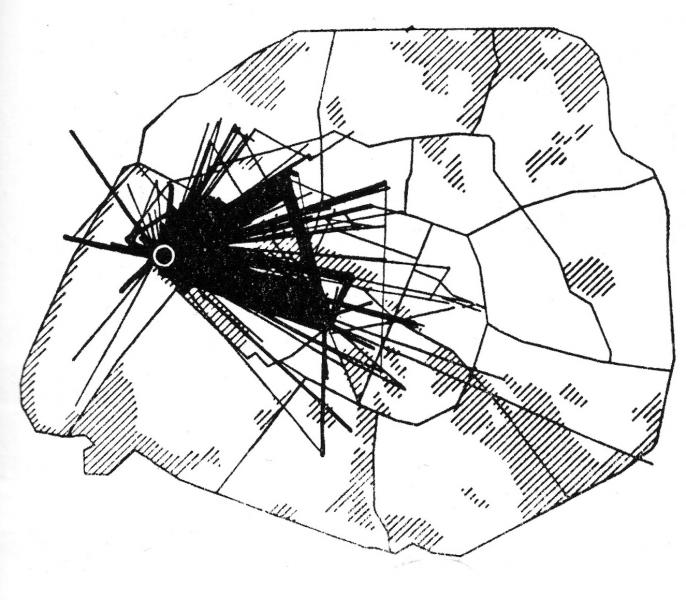 The result—an insectoid clot of heavily scored, angular lines on an otherwise vacant field—lacks any hint of the swerves Debord’s “Theory of the Dérive” celebrated as “significant deviations” (62): it is the Situationist version of the mental map of a maze-running rat.

Debord and Asger Jorn’s collage “The Naked City” (1957), by contrast, maps a stylish, capacious, and transgressive event-space.  “From a dérive point of view,” Debord explains, “cities have psychogeographical contours, with constant currents, fixed points and vortexes that strongly discourage entry into or exit from certain zones” (62).  To map territories conducive to swerves, Situationist cartographers had to devise a form to capture the city’s psychological and social as well as spatial layout.  To borrow a term from Hakim Bey, they needed to identify “temporary autonomous zones” without obliterating the grids that constituted them.

To make their map, Debord and Jorn used an x-acto knife to excise from two municipal tourist maps sections of Paris not yet ruined by capitalism and bureaucracy, set these sections into a swirl, and strike them through with arrows to mark junctions and transfer points—“slopes,” in Debord and Jorn’s terminology—into and out of zones conducive to the aleatory practice of the drift.

As its noir title suggests, The Naked City is a forensic map: it emerges from pavement-pounding atmospheric sweeps of the city during which the cartographers sniff out evidence, follow hunches, and adjust their routes on the fly.  Like the forensic maps in our later commentaries, maps of chemical spills and drone strikes, it is the result of hardboiled research meant to be activated in a public forum inhabited by victims, suspects, and perpetrators.

There is, however, a crucial difference between Situationist and forensic counter-maps.  Rather than simply displaying information, Situationists invite citizens to generate it for themselves by maximizing their experience of a dense and fluctuant space-time.  In this sense, their city plans are proleptic rather than descriptive.  To create their zones of ontological anarchy, they excise the residue of capitalism and bureaucracy—the political, economic, and legal contexts of a rationalized Paris—in order to lure drifters, poets, and artists into the significant deviations and unforeseen combinations that might generate, in Jameson’s words, “a dialectical advance” or create, in Wark’s terms, “a relation out of infinite relationality” [008].

Debord and Jorn’s Situationist map is an abstraction of the world made with urgency and gusto.  Although its DIY, x-acto knife, cut-and-paste technique predates the technologies by which we now represent the world—among others, the digital affordances of GPS, GIS, and satellite photography—it nonetheless brings into view elements of the sub-genres that will structure the rest of these commentaries on counter-maps.  Like The Naked City, forensic, locative or embodied, activist or maptivist cartography is useful to put into dialogue with contemporary poetics which is also self-reflexive in its theories of mind and memory, eager to alter the experience of everyday life, and, as far as humanly possible, eager to detect a flux that vastly exceeds the dramas of the isolate self and the forms designed to record its vicissitudes.