There’s a moment, a fraction of a second, when I first look at a page and recognize the thing. Ah, a poem. It’s the form of the white space that registers as much as the black. Words taking shape? Poem, poem, poem. My pupils spread, irises thin, no doubt some region in my brain changing color.

I start to think the way I think a reader of a poem ought to think. I quiet myself, tamp down my sense of humor, prepare to take the poem in on its own terms and issue judgment on whether I think it “works” or not: works in the sense of doing something, of seeing to it that there are results; and works in the sense of earning my trust by implying an awareness of the possibilities and limits of its own aesthetic invention. (The closer this awareness is to imperceptibility without altogether vanishing, the smarter it makes me feel upon noticing it.) As a reader, I try to blend both of these senses of work together, hoping the poem gets to where it needs to go — the core of itself. That’s why I’m most pleased when I discern in a poem a dynamic that I could only characterize as a Mobius strip of intentions. (I’m sure someone in a theory seminar I took in the ’90s would want to impale me for using a word like intention, but I don’t care. I like to imagine that poems can try to do things.)

I’d been told that the poem is titled “Couch” and written by Sawako Nakayasu. This brought on me a great deal of shame. I’d never heard of Sawako Nakayasu, never read anything written by her. I quickly and complacently justified my ignorance by telling myself that professional demands have turned my attention to other works of literature and besides, it might be best that the field of a First Reading be unsown.

It says, “Couch.” I’ve always regarded the title of any poem as a signpost of an allegory in miniature, so I list meanings of the word as a frame of reference. The dedication is for Maggie Siegel, who Google reveals is a muralist with qualifications in glassblowing, if that in fact is her. Who knows. I wonder how Sawako Nakayasu knows the real Maggie Siegel, and how well. If a title signposts an allegory in miniature, a dedication is a tempered inside joke.

The lines assume I’ll read it left to right, top to bottom, so I do. It’s in English.

After countless days and nights of living

together, a couple decides to get divorced.

Oh snap. Been there, done that. My poetic sensibility competes with narrative: close reading and generative reading. Rarely is a line break used so well for effect; the two lines at once fit each other seamlessly and, conversely, disjoin as if pieces of different poems. The word “together” finishes the line break’s accomplishment, which opens the possibility of “together” as a squinting modifier. I have no impulse to relineate, and meanings of the verb to couch come to mind.

To split that word in half does at least three things: underscores the importance of line breaks like the first, folds irony into the poem (“negotiating” being a specie of conciliation), and controls the visual tempo of the jagged right margin. The repetition of the word “over” for some reason reminds me of the stanza break of a sestina, the straightjacket of verse. I can’t help noticing the play between careful lineation and the casual, conversational tone of phrasing, but I feel guilty paying so much attention to form when there’s a drama here.

before they give up and decide to call the
ants. She gets on the phone and calls up

“Ants.” Like a colony. Complex collective behavior. Unwelcome at a picnic. On the spectrum of homophones, a familiar one defamiliarized.

her ants, he gets up and calls his ants from

(And then a page break.)

his cell phone. The ants arrive at 8am on
the following Monday, and quickly set
to work. […]

The industriousness of “ants” redefines aunts. I can’t say I’ve ever thought of aunts this way but I can see how other people would. The more I read, the more the poem resists my attention to form, although I do anticipate the conceit to turn. Why did I say conceit and not objective correlative or even story?

So now it’s Monday, a different day, but the bookends “8am” and “4pm” remind me of the Classical unity of time. I’m starting to feel like a beachcomber with a metal detector. Can there really be so much archaic poetics buried within such a contemporary poem?

enter gingerly, wondering if any progress
has been made. While questions still fly
about the room as to what will happen to
the refrigerator, the records, and the tele-
vision, […]

The word “[w]hile” is a signal. More than a signal — a promise. It’s the first time the syntax attempts simultaneity.

[…] they find that the couch has been

There it is. The turn. Problem, volta, resolution.

broken down into small chunks, neat little
couch chunks, all thanks to the his and her
ant set they had received as a wedding gift.

The couch is taken apart. Why? To unpack a pair of knotted lives by unpacking the dimensions of this single word? Yes, and more, an inquiry worth a second reading. I’m left feeling this poem has been sneaky, but a good kind of sneaky, maybe the best kind (J. M. Coetzee once used the phrase “honest cunning” — that’s precisely it). And what is sneaky if not diligent and alert? So yes, in both senses of work, “Couch” works. “While questions still fly.” 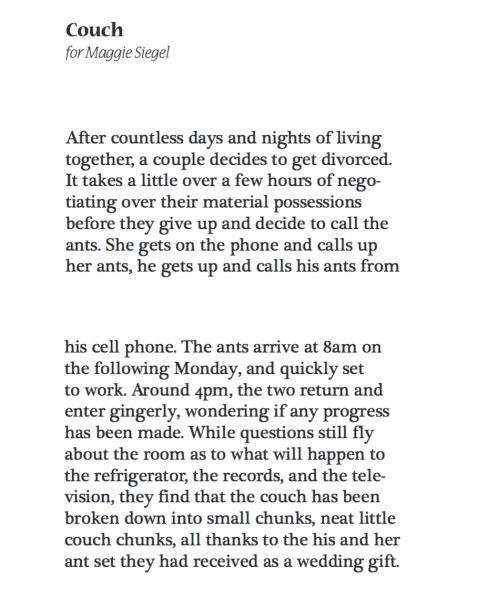 David A. Colón is assistant professor of English and Latino/a Studies at TCU. His poems have appeared in DIAGRAM, Score, and Latino Stuff Review; in Dan Waber’s this is visual poetry chapbook series; and elsewhere. He has edited Between Day and Night: New and Selected Poems, 1946–2010 by Miguel González-Gerth (2013); authored a novel, The Lost Men (2012), nominated for the Arthur C. Clarke Award; and published articles in Cultural Critique, Transmodernity, The Journal of Philosophy: A Cross-Disciplinary Inquiry, The Journal of Latino/Latin American Studies, How2, and other journals. He is a contributor to The Princeton Encyclopedia of Poetry and Poetics and the forthcoming volumes The Routledge Companion to Teaching Latino/a Literature and The Cambridge History of Latina/o Literature. He exposes himself at tcu.academia.edu/DavidColon.