In 2009, Tim Roberts and I opened Counterpath Gallery in downtown Denver in order to expand what we’d been doing as publishers of Counterpath Press. For four years we hosted readings, film screenings, installation and digital work, dance and performance, lectures, and workshops — often up to three events per week. In 2015, we lost our original space, and then, through the nonprofit Counterpath, we purchased and converted an automotive garage with a surrounding plot of land. When we opened our new doors in 2016 it was with a transformed idea for what we wanted Counterpath to be. Up to that point, we’d been primarily a locale for innovative arts.Since moving into our new location, we’ve worked much more closely with the existing neighborhood, generating projects with local activists, neighborhood artists and historians, and kids. We also launched a community garden where we collaboratively grow food for all participants and for donation to Denver soup kitchens.

The garden grew out of writing in more than one way. It was the biproduct, one could say, of the space we’d been making, first for writers and later for pretty much anyone. But it was also directly inspired by the orchard Ross Gay writes about in his Catalog of Unabashed Gratitude, which I’d heard him read from at the Clemson Literary Festival about a year prior to first planting. The garden grew into writing as well, as those who worked in and ate from the garden were mostly writers (though not all): HR, Jessica, Matt, Sam, Stephanie, Lily, Jeffrey, Mathias, Kelly, Don, Barb, and a handful of kids built beds, shoveled dirt, planted seeds, watered, harvested, ate, and gave the food away.

There was more chard and kale than we had time to pick; not nearly enough tomatoes; plenty of beets, carrots, and beans; too much zuchini; no potatoes. It was not paradise. The squirrels ate all the fruit from the trees for one thing, despite the ridiculously effortful pruning. We watered the hell out of broccoli that gave us stalks as thick as our arms and heads of only flower. Walking into the church kitchen each week with bags full of produce, I knew I was carrying a minimal achievement not much more valuable than the piles of bagels on the tables, and certainly less so than the canned beans on the shelves. It was obvious that our work was, in a sense, futile. Food laboriously grown is soon eaten. And anything short of a full-sized farm is absurdly inefficient at feeding people.

In The Human Condition, Hannah Arendt makes a distinction between two human activities: “labor” and “work.” Work, the activity of the hand, is productive of a definite end. The “work," the made thing, has use value, such as tables and chairs do, as well as speeches, plays, and even poems. Labor, on the other hand, is essentially processural. Producing nothing but life itself, labor is repetitive and anonymous. Cleaning, birthing, and of course, the production and preparation of food: these activites of the body are, to Arendt, “silent” because so often wordless, and “dark” because private. For the Greeks such activities are relegated to women and slaves: “to labor meant to be enslaved by necessity.”

But while for Arendt labor is the least exalted of human activities, for me last summer it became the most valuable, even if almost comic in its inefficiency. The minor gesture of small-scale food production was, like publishing has been, a way to temporarily inhabit what Linda Norton, quoting John Berryman, calls the “disambitious,” a way to work with others in a profoundly (because necessarily) egalitarian manner with a shared goal at once essential and modest.

“Food justice” is too grand a term for what we are doing. The complexities involved in owning property in a city dealing with soaring real estate prices and subsequent homelessness makes the word “justice” in this context necessarily ironic. There are ways to address such ironies and complexities as we plan to increase next year’s output while sharing the food at an even more local level. There’s no space for detailing such plans here, so instead I’ll share this expression of anticipation (by HR Hegnauer): 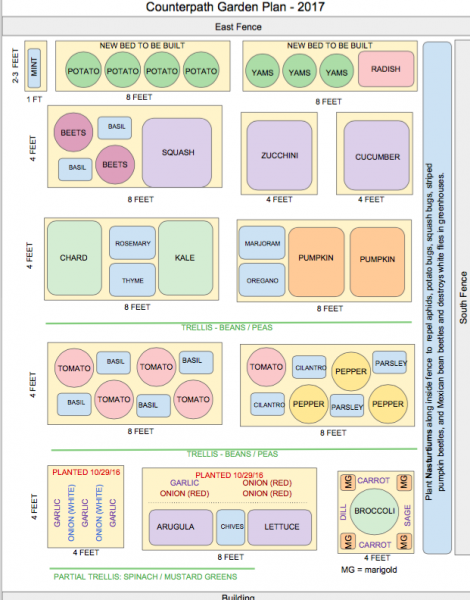 and hope to address some of the issues around art spaces and art projects within the ethical/political/social demands of real life as this series continues.