Where exactly in Dorchester is the campus? Hard to think of a spot where it cd be, unless something else was removed. At least from my time. The old insane asylum? In Franklin Park golf course? Or the removal of Franklin field? The areas have changed a good deal, of course, since my childhood. Yes, it has little sense of my ever having been there.

These words, typed on the thin onionskin of the old aerogamme envelope arrived on my desk in early winter 2002, its heading reading: “Winter Solstice 2002.” I’d written Corman a month before about his letters and papers, the poet, George Evans having brought me back to Corman’s work, reminding me of our connections: the West End Branch of the Boston Public Library, Boston Latin School, WMEX Radio, Dorchester. I

I mentioned these connections when I wrote to Corman, in hopes that he’d respond. I told him of how I’d spent many afternoons in the fifties reading at the old West End Branch of the Boston Public Library, then located in the Old West Church on Cambridge St, (the venue from which he’d launched his poetry readings), like him had attended Boston Latin School, spent my evenings listening to WMEX, and, that through the eighties and nineties, I’d had been living in Dorchester, about a mile away from his old house. I mentioned all this as well as the fact that I worked at the University of Massachusetts–Boston, located in Dorchester, and hope there might be the possibility of bringing some of his papers to the campus, bringing them back home so to speak.

Corman’s was skeptical, of the idea. Boston had never taken to him, he thought. “Boston has famously been — from the start — least interested in me. The West Coast picked me up much more — and NZ/Australia, etc.,” he wrote.

Corman was right, of course. Lowell, Emerson, Longfellow, Bishop, all cast long shadows across the scene and true, there was little sense of Corman’s ever having been here. Yet, Corman, was here, and was both shaped and shaper of the city’s history, and a few of us — Bill Corbett, Askold Melnyczyk, Mark Pawlak, Joe Torra, Taylor Stoehr, and myself — had begun thinking of ways that we might reclaim Cid’s space. We even developed a plan for a Cid Corman Poetry Room in the university library.

For myself, the effort meant finding my way back to Boston Latin to find some traces of Cid Corman’s passage there. It was a hot day in the middle of summer, and the school was closed for construction, but the librarian devised a way to sneak me in. He’d already copied out some documents. 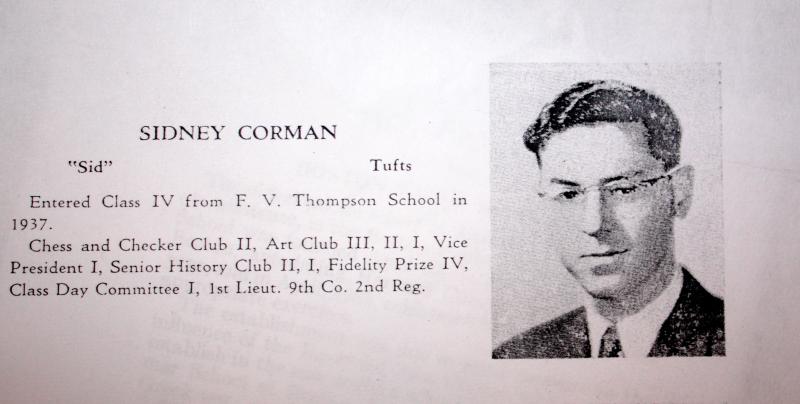 Cid Corman is “Sid” in that 1941 Boston Latin School Yearbook. He’s pictured on the page, his hair neatly cut in a slight pompadour, in wire-framed glasses, wearing a sport coat and tie, mandatory dress for what was an all-boys school up until the 1980s. His photo appears at the top of the page, below him are the photos and entries for his classmates: Robert Francis — “Baby-Face” — Coughlin, Sylvester — “Syl” — Robert Curran, and Nicholas “Mad Turk” Rocco DeBiccari. It’s 1941 and the shadow of World War II is already cast across their faces, future destinations etched out in college choices: the Coast Guard Academy and West Point.

His activities include the Senior History Club, the Chess and Checker Club, the Class Committee, and the Art Club. 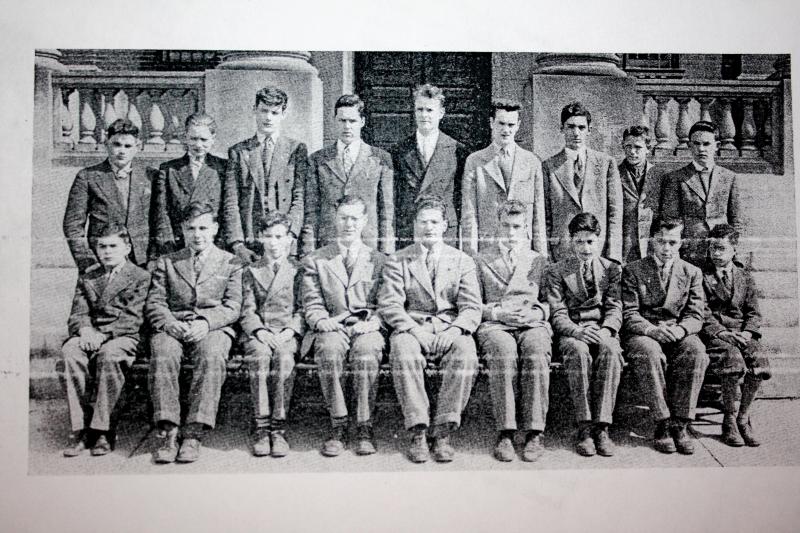 Latin Schoolers passing Room 221 on Wednesday afternoons may have seen other boys sketching and posing, and yet never have thought of entering the room. This failure to take advantage to take advantage of a great opportunity is too bad, because art is everyone’s soul, and an Art Club should be encouraged in a school where such great stress is placed on the humanities. — Boston Latin School Yearbook, 1941

I’m not sure if Corman wrote the entry for the Art Club. He is listed as the vice president of the Art Club Yearbook. Though there are black box theaters, music rooms, and studios at the school now, Art was not a subject taught at Boston Latin in Cid’s or even my own day. Yet here on the page seventeen boys and their advisor, Mr. Sternoff of Massachusetts Art School, pose in suit and tie for the Art Club photo. Corman is at the center, the vice president. In the text, Corman’s role in the club is spelled out in more detail.

“The club enjoyed many interesting talks concerning color, and shading techniques given by Mr. Sternoff. Khirallah spoke on tones and their effects on the observor, and Corman discussed modern art and artists.”

Corman’s was a member of the Class Day Committee, responsible for penning the class oration, a document of remarkable prescience, which focuses on the importance of the preservation free speech in times of war.

“The greatest strength of a democracy may also be an incurable weakness. The tolerance of political belief guaranteed by the Constitution is, as it should be, irrevocable; but this may also be used as a weapon against that people that assured it. Nevertheless, this right should not and must not in any degree be curbed or impaired.”

One can imagine Corman behind these lines, or his classmate, Nat Hentoff, Hentoff, jazz commentator, First Amendment activist, and columnist for The Village Voice. Hentoff was friend and classmate of Corman at Latin School Days and for years after. Corman credits Hentoff with getting him the poetry show he would host on WMEX from 1949–1951 and with being part of the discussion group he started at the age of seventeen. Hentoff’s memoir, Another Boy’s Boston offers a glimpse of the world the two inhabited, in what Hentoff refers to than as “the most anti-Semitic city in the nation.” Hentoff’s book plays off the title of another well-known memoir: Samuel Eliot Morrison’s One Boy’s Boston. Hentoff’s memoir describes, not the worlds of Beacon Hill or Back Bay, but the world of Jewish Boston, a geography of Roxbury, Mattapan, and Dorchester, marked by shops, temples, shuls, immigrant households, a Boston of old jazz clubs, record stores, late night afterhours gathering places, racial borders, politics of left and right.

That world is gone, though I went seeking it recently, on a kind of pilgrimage. As Corman says, much has changed. The old trolley routes out to Roxbury, Dorchester, and Mattapan have disappeared, and with them the ease of connection of these neighborhoods to the city. The last of the city’s elevated lines through Roxbury came down a few years ago and the temple have moved to the suburbs. The golf course Corman mentions suffered years of decline, and was saved and resurrected in the eighties and nineties by the African American golfers and community members who refused to see it closed. The old insane asylum is long closed. Community gardens and housing developments sprawl across its old grounds. A few years back artists were invited to create installations in its wards. Former Celtic Tom Sanders, created a tennis program at the old Franklin Field in the worst days of the Roxbury-Dorchester gangs. 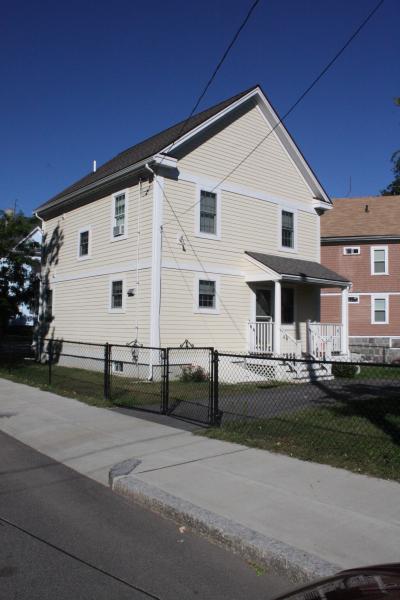 Corman’s old house, 51 Jones Avenue, remains. It’s a duplex now, located at the end of the street, one side only retains the number 51 address, that place from where Corman sent out the copy of those early printings of Origin, the pages filled with writing by Creeley, Olson, Levertov and others.

My visit occasioned some curiosity: who was this white-haired man standing in the street taking pictures of the house on the corner? I stopped people on the street, and knocked on doors, but no one remembered Cid. One middle-aged man, brought me in to talk to his aunt, translating from her Spanish, that she was happy to know that such a poet had lived right next door.

It was from this small house that Cid Corman’s writing life took off, spreading its influence over Boston, Buffalo, San Francisco, Japan, New Zealand, Australia, his works eventually translated into a dozen languages. Sixty-one years of writing poetry every day. And all that correspondence, only the very early letters his mother “compelled him to throw away” missing.

Sadly, the bureaucracy quickly nixed our plan for a Cid Corman poetry room. I think Corman would not have been surprised. Still, we managed to find an angel and purchase a set of all of Cid’s books from Bob Arnold. They form a neat line in the university special collections department now, where, slowly, and rightfully, Corman may be beginning to reclaim his space, there to remind us every day:

This section of Jim Dunn and Kevin Gallagher's feature on poetry of Massachusetts, “Mass: Raw Poetry from the Commonwealth of Massachusetts," focuses on the influence of poet, editor, and translator Cid Corman.

Cid Corman on Jacket2 and PennSound

Carol Williams, a longtime friend Cid Corman’s wife, Shizumi Konishi (Corman), wrote a thoughtful response to George Evans’ article from this feature, which you can read here in a commentary post by Al Filreis. Filreis also hosted PoemTalk podcast #23 — in which he discusses Corman’s poem, “Enuresis” alongside Frank Sherlock, Fran Ryan, and Thomas Devaney — and offers up a remix of Corman here. Over on PennSound’s Cid Corman author page, you’ll find a small selection of recordings of the poet himself, alongside audio and video from a September 2014 celebration of his life and work at the Kelly Writers House.