I’m flying.  Curious, in the speed of language, even when the talking seems ordinary / flat, there are echoes — wait a few lines down — words like Quasha and cumquats come up and leave, leaving floral pieces,    and   sky.    Words  a-float  ,/ ,,/ Aegean gods have a kind of influence, and there are the colorful ghosts
dark-lined
hovering
in and out of boxes
inhabitants of between
the                     lines
where language
circles

I’ve been rereading Basil King’s work
words, images
ever since
(since I was there, since this began, the promise, the reaction, which now, enfin, finally, I realize canNOT a be a “criticism” or “review” but just this: saying    and leaving spaces for   what   his pages   elicit (draw out / yes, dr-a-w))

from my eyes and mind and hands;     causing me to feel as if I rise above   page after page
not intoxicant
not from trickery
but in a new kind of habitation &
moving forth,
he
draws the reader / the viewer (seeing / reading / seeing) this way
and other ways as
well.     He doesn’t “discover” but does reveal what the reader finds.

So are we (I mean so am I, but I like to presume the plural after all these years of possibilities in the presentation of his work):  so are we amused way beyond the pleasure inherent.

Paint and canvas, lost and found, names to remember, sudden conversations, inside recollections.    The surreal comes so easily because it arrives inside the (seemingly) mundane, the quiet tones of familiar conversation;  but there is Blackburn and there is Cezanne, there are Baz King’s mother and father too, and Ernest Shackleton who taught him endurance — in the environment, and Steve Jonas suddenly calling King JEW JEW;   and here is Chaucer entering so easily, and we have been on the road with Basil King and his colleagues;  and here are some theories about painting mixed into an overnight in the bushes of New York City or an ironic encounter with highway policemen in Boston.    Identity is a title, but a search for identity is not the issue of Basil King’s work.    He knows, “we know where we are going,” he knows / the speaker knows / who the speaker is, and he can include artists of long ago/  of inside his sweeping gesture.   Just as he knows dots, colors, how they can all connect.   “Paint and canvas”  :   in a few words / in pages of print and reprint / in prints of his images / Basil King gives wisdom larger than …   “War, domesticity, political injustice.”   Basil King the painter / the gardener / the   poet   comes back from “the garden of the Lost and Found” where one book began, and comes around, to tell who-will-listen / who-will-see-the-colors / who-will-join-in-a-knowing   what he can let us know over and over, with Chaucer and Marsden Hartley and “Primrose” (who is Primrose, is that Martha, to begin and end? is that another notion of roses and colors and entering rooms where there are packages that people want to lose?).    No matter what the reader cannot “know” as at a table or a conference:  ENTER the room (or the garden, or the place of “Lost and Found” or a journey from Black Mountain in North Carolina or Basil King’s childhood or NOW) …  enter, listen to the repetitions, follow, and you will find more than Basil Cohen knew, and as much as Basil King may reveal, may strew;   join him as he follows the dots.

Repetition — of phrases or words — is not for music or for a cute “I am a poet” stance:  it serves musing (sometimes a-musing) and inclination.     Sometimes there is simultaneous disavowal — as if the speaker affirms and denies, or thinks and doesn’t think, or  believes and doubts.    Like in life!

Does he exist, this writer / artist?   A little boy Cohen, born in England on the verge of war (and danger, no need to point out he’s a Jew;   it comes up later in Identity anyway);   comes to the US deprived — of what he had reached high up and wasn’t allowed to keep;   but deprived over all of place and identity and meaning.   Ergo:  the play of words is a playing with words as crucial — as what there is, only — like a ground, maybe? a grounding?   Paint also.   Color is prismatic, bold, lines draw out (or in) a magic.   There is only that gesture.   (Later the lines will repeat “Paint on canvas.”)

Writing and painting were a way of establishing, grounding, creating.    Not “discovering” but revealing what is deep, what is somehow known.    Breaking the boundaries of who the boy Basil Cohen was, becoming Basil King (his father’s son, his father’s chosen name) here.     An arrival does not have to be announced.     Ideas do not have to be declared.     They are simply spoken.     Insights are quietly included. 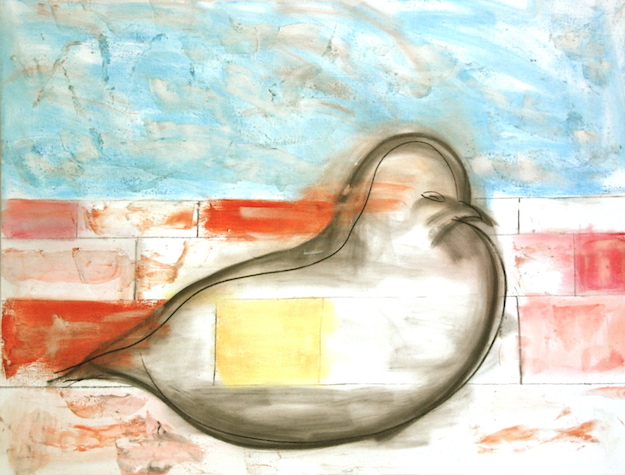 Breaking boundaries is itself a cliché that must be bro-ken.  Ken?  Yes, bro’.  (Apologies for playing along, Basil makes me/   allows me   to play!)  Corny?    So what: sew parts together:  gather all, Baz reminds you of knit — didn’t he travel with the weaving teacher? — no need to keep in stitches, not even thoughts, thoughts worth their while (worth a while, a whiling away of time or no-time) are un-even, even ragged, like good muffins or pinafores.   Hems, they skirt a few issues;  many issues return in a package of new ideas.

You require attention.   There is a fine line between cash payment and rugged (or rigid) attending.   To the minutia of most lines.   Skip a few, he won’t be mindful, but you’ll go back, as I have done, time and again (damn, another song coming to mind:  this is no singing matter or any arrangement, certainly not rhyme;  but Baz makes ideas rhyme in new rolling ways, even overboard / cap — sizing and swimming along under currents — a current of political trends, a prophesy for poetics, new art in the clime   where colors gain the roseate glow of an eastern dawn.   (Can I dare say Athenean just because I’m rereading The Odyssey while I’m rereading Basil King?)

Boiling over and yet he goes so easy.   It’s not the repetitions that make him witty, but the wit that allows even the most mundane to crackle, finger-snap.

Quick!    How to describe the rhythms of Basil King’s written work:    like alabaster mixed with the silver of blades?    No …  like alabaster or the feathered albatross?   No …  like the white of background and the dark white of a good solid ground.    Ground and sky, but smooth and rocking and then, sometimes, suddenly, jumping.   As in dot / dot / follow the dots.     Rhythms:   pastels calming into the right places for figures — even the ominous, like up from some other kind of graves, not European, the daring of dark lines where there might have been clouds now there are forms and figures as in wherever he writes these phlogesteron figures go — waft! wafting.   Yes, but they settle also.

I never know where I am when I read him (his work, maybe that is “him”) or where the lines are going, but this is (I know) something to follow.   When I am bored, I dig the hole and climb in the line and there is another ladder — or a tiny painting of someone emerging   from a box.     Not into someplace like cherry blossoms or hibiscus or clematis, but like clouds of distant spring colors / fragrances, flagrant onomatopoeia.     Basil King — how long ago — allowed not everything but some chosen things and one more — into what one finally sees is the poem and all that while you knew it was prose (and yes, you knew it was a poem) lying flat on the line.   Did they know at Black Mountain that prose and poem can be …  What did they allow?   What did they not allow?

Quoted lines taken from the following works by Basil King:

Reactions to Basil King's work
Light out of shadow

Basil King: Learning to Draw/A History: 14 Eyes — Desire
On the Gift of Basil King’s Devotion
Light out of shadow