Listen to every Beatles song in one hour

What would it sound like if you compressed all the Beatles UK LPs into a single one-hour mp3? The compression rate would have to be 800%. Conceiving of this as sound art, Steve McLaughlin did just that a few years ago. It’s posted to the WFMU web site. So go here, settle in, and hear nearly everything the Beatles released in one hour. There's a certain strange hepped-up beauty to it, I have to say. It's like a super-fast running of my youth, an aural brain chute. Someone at WFMU then decided to un-compress several of the singles. So at the same site you can click on links to mp3s of “Julia,” “I Will,” and “Revolution” back at normal speed but eerily distorted from having been through the first compression.

Return to the tapeworm foundry

A few years ago Darren Wershler-Henry visited us from Toronto. His book of 2000, The Tapeworm Foundry, was being celebrated by an exhibit in the KWH gallery ("KWH Arts," we called that ongoing project then — now The Brodsky Gallery). Kaegan Sparks commissioned a number of Writers House-affiliated people each to make art from an instruction of the sort that fills Darren's book. I wrote about this at the time of the exhibit. 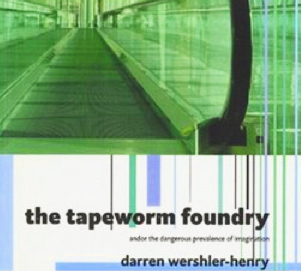 One artist dipped her long hair into calligraphy ink and dragged it across long rolls of paper (this is actually a classic Fluxus piece). Another person created an inky footprint and then ran it through an OCR (text-recognition) program and printed the “language” that resulted and put the two up on the wall, side by side. Another pair of artists counted all the periods (at ends of sentences) in all the books on a Writers House bookshelf, then printed out the periods on 8.5 x 11" paper and wrapped the bookshelf in the paper.

While Darren was in the house, I gathered him, Kaegan and Kenny Goldsmith in my office, and the four of us talked about Darren's book and the exhibit, and about conceptual poetics/concrete poetry generally. This is the newest in the series of "PennSound podcasts", and please have a listen.

1. Links to works produced for the exhibit.
2. Video recording of the opening program.
3. Photos of the event.
4. Text of Tapeworm available at UbuWeb.

We at Jacket2 happily take note of this news report — among others, of course — announcing the selection of Fred Wah as “parliamentary poet laureate” of Canada. The photograph here was taken by Lawrence Schwartzwald.

Wah is the fifth poet to hold the office.

The post was created in 2001, with a mandate to write poetry, especially for use in Parliament on important occasions, to sponsor poetry readings and advise the parliamentary library.

The poet is appointed by the Speaker of the Commons and Senate on the recommendation of a selection committee which included, among others, the commissioner of official languages and the head of the Canada Council.

Wah is a well-known poet who won a Governor General's Award in 1986 and is on the faculty of the Banff Centre for the Arts.