Above: a photograph by Lawrence Schwartzwald of Kenneth Goldsmith in his final appearance as Poet Laureate at MoMA yesterday, reading from Seven American Deaths and Disasters in front of (and here gesturing toward) Andy Warhol’s Orange Car Crash Fourteen Times. (Photo cannot be reproduced without permission from the photographer.) On March 20, 2013, Goldsmith gave his "poet laureate lecture," titled “My Career in Poetry, or How I Learned to Stop Worrying and Love the Institution”; this was recorded and is available as a video here.  Seven Deaths was recently reviewed by Dwight Garner in the New York Times. 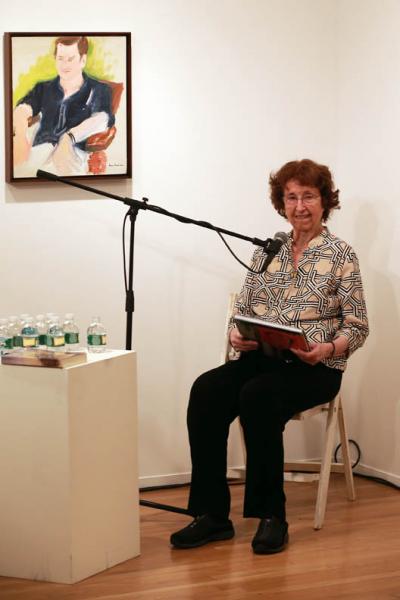 MoMA's 'Transform the World!' as photographed by Lawrence Schwartzwald

In celebration of National Poetry Month, the Museum of Modern Art presented “Transform the World! Poetry Must Be Made by All!” For a full hour, the galleries came alive with the sounds of spoken word, as poets read their own works and those of others. Ranging from emerging to established, from conventional to experimental, the poets demonstrated the varieties of U.S. poetry today as they performed under and in front of works of postwar modern art in MoMA’s collection. This event was organized by Kenneth Goldsmith as part of the “Artists Experiment” initiative. Lawrence Schwartzwald witnessed the event and took the photographs reproduced below, which are used with his permission; republication by permission of the photographer only.

Matvei Yankelevich and Bernadette Mayer read at St. Mark’s Bookshop on East 3rd Street on June 11, 2012. Lewis Warsh hosted. Our favorite literary photographer, Lawerence Schwartzwald, was there and took this shot of Bernadette during her performance.

Someplace other than what he read and the video he showed

David Buuck and the reenactment of Occupy Oakland

This past Saturday David Buuck presented at the Bowery Poetry Club for the Segue Series. I say “presented,” rather than “read,” as his reading featured video and song in addition to recitation. David has been exploring a very interesting range of problems in an expanded field of poetry for some time. Some of this is contained in his book The Shunt, which appeared with Palm Press in 2009. Yet the majority of it has been documented through pamphlets the poet-artist-theorist has put out himself, under the moniker BARGE, which stands for The Bay Area Research Group in Enviro-aesthetics, and more recently on Vimeo.

While I have long admired David’s performances, which blend constraint-based writing with movement, dance, and music, this Saturday had an added urgency as he addressed conflicts between participants in the occupy movement and police in his native Oakland.

For years David and I have had an ongoing conversation about the uses (and abuses) of “reenactment” for public demonstration and aesthetic intervention. His 2008 work, Buried Treasure Island (which I discuss in a previous article at Jacket 2, on “Somatic Poetics”), features “pre-enactments” of what he hopes will be future ecological actions and sites, figured through the artist Gordon Matta-Clark for whom he has named a yet-to-be-remediated “park” on the island.

Reenactment came up in a different way through the performance at Segue, where David first read what seemed to be a series of instructions for dance and/or movement (like ones a Yoga instructor might give, or he and I might give our students at Bard College’s Language and Thinking workshop). After reading these instructions — to bend your arm so many degrees, to place your chest on the ground, to exhale in a particular way — David proceeded to read from an Oakland police blotter, which he told me afterwards had been leaked by the hacktivist Anonymous only days before.

From the shelves of the makeshift OWS library