In “Composition as Explanation” Gertrude Stein writes: “The only thing that is different from one time to another is what is seen and what is seen depends upon how everybody is doing everything.” [1].

Lydia Davis is a writer who is a great influence and inspiration to “everyone,” when everyone includes readers of experimental fiction as well as a myriad of poets “doing everything.”  Davis is a master of short fiction and extremely short fiction, as well as a celebrated translator, novelist and poet.

At a recent reading at Bryn Mawr College, Davis addressed the audience at first by noting the grandeur of the room.  She said, “I’ll just stand here and be impressed for a while.”  And that is exactly  how the audience regarded her, standing before dramatic windows and reading short and very short works from her forthcoming book titled Can’t and Won’t. At one moment dramatic lightning lit the room and she paused in her reading to note that she had not brought an umbrella.  Davis has the ability to take a simple detail which appears to be drawn from the repetitive nature of the quotidian and to magnify its associations and triggers therefore launching the mundane into the grim, surreal, comic or philosophical.  For instance, here is a very brief story, titled “Housekeeping Observation” which I hopefully copied correctly as she read:

“Under all this dirt the floor is really very clean.”

Davis hints at the life observed, often from a somewhat detached analytical distance, but her subtext points to the hidden, the unseen, the elephant in the room, embarrassment, anger, awkwardness, failings of personality and the body, ambition or personal slights.  Often reading her work I think, this is what the writer says to oneself, in the privacy of one’s room, later, after interactions have taken place.  Hers is the voice which pleads or conceals, complains, consoles or neurotically traces patterns.  In the surface of her works is a fluid accessibility in events, voices and locations.  The reality which she probes is not obliquely suggested, it is always right there, immediate, so that in reading there is a simultaneity in effect.  Her insights often shock or entertain with a direct and unexpected honesty.  The clean floor is always right under the dirt right under our feet, but how often do we consider it?  The dirt could be a metaphor for the work it would take to remove it, and this aspect of effort, of the difficulty of honesty or wakeful human consciousness could be a revelation. Peeling back layers required to reach any clarity about human behavior, or the way the mind works, is possible, and yet we see in the picture presented that it is a daunting and endless task. At the same time, it is just dirt, or unglorified dirt which is offered.  The dirt is real dirt for a reason.  In other words, there is nothing purely ornamental or gratuitous about it.  We aren’t just imagining this dirt.  We, the reader, stand upon it openly, whether or not we are aware of it.  Davis keeps reminding us where we stand, what we stand upon and how our foundational assumptions and predicaments influence our interactions with others.  Her work appears effortless, while in the same breath chronicling travail.

Here is another of the very brief forthcoming stories, though I did not get the title.

“Now that I’ve been here for awhile I can say with confidence that I have never been here before.”

This statement seems fitting to describe many positions, and particularly at this moment, my fascination with the poet’s novel.  Perhaps a poet comes to a place in his or her writing life where in order to say with confidence that one has never been here before, a switch is required, a movement to prose.  Also, inside any poet’s novel is the experience Davis describes, of both an initial dislocation, then familiarity which creates a textual dwelling, and also the sense that the text is entirely new.

Both of these short works could be called poetry, are categorized most commonly as “short fiction” and at the same time they gesture toward the poet’s novel.  How long must a novel be?  Can a handful of words encompass a novel?   More to the point would be a question: how short can a novel be?  Are there edges, boundaries, limits to the form?  If so, who is able to break them and how?

Back to Stein: “The only thing that is different from one time to another is what is seen and what is seen depends upon how everybody is doing it.”  Many novels fail to provide the depth in acuity in much of the shortest works by Davis.

When I asked Davis about divisions between poetry and prose, and between short fiction and the novel in her own work she replied “I don’t label ahead”  (meaning she does not decide before she begins to write what genre she is creating) and noted that she thinks of her work as a “continuum” indicating that these boundaries between genres and forms are for her somewhat fluid, and not something she considers while she is writing.  She said “the material determines the length.”

When she was asked her why she writes “short fiction” she invoked the Scottish poet Edwin Morgan and his homage to Zukofsky, the point being that the title of his poem is three words and the poem itself is only one word, “the.” [2] 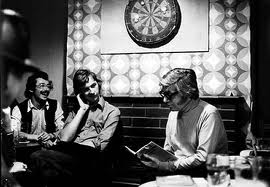 In Stein we find “A sentence which is in one word is talkative.” And “A paragraph without words.” [3].

Davis also noted that while working on her translation of Proust she spent long days toiling over the Proustian sentence, so in her own work a the time she “reacted against it a bit,” and “decided to see how short” her works could be and “still have them have substance.”