Laynie Browne: Is there such a thing as a “poet’s novel”?  If so, how would you characterize the form?

Dan Beachy-Quick: I do think there is such a thing, though I don’t think it’s any one thing. The simplest answer would be a novel that a poet writes, but I think we all feel that such a measurement fails. I suppose in my thinking I consider a “poet’s novel” one that bears a certain kind of relation to itself, a relation that parallels a poem’s relation to itself. Such a novel may or may not have a stake in plot, but such narrative drive feels to me an accident of a deeper investigation, one which can only be conducted by the novel being written. Such a book asks a question that can only be asked within the world it creates, as Melville must include within Moby-Dick that information, that encyclopedia, that makes a whaler of any reader of the book. The poet’s novel draws us in to it in ways that can be frankly uncomfortable, refusing the mere excitement of our being entertained, often 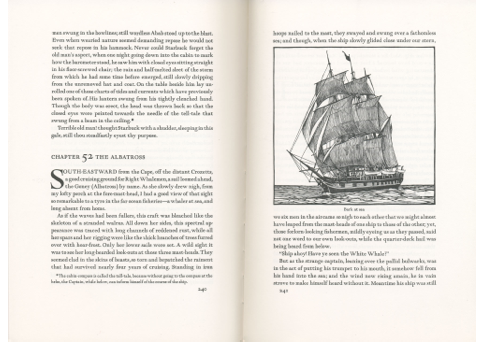 burdening our pleasure with questions that undermine a typical novel’s certainty — say, the difference between reader and writer, self and other, word and world. A poet’s novel works within our imagination in ways atypical to the normal (so-called) novel. It implies, as Keats implied, that imagination isn’t a momentum that carries us away from the reality of the world, but something far different, perhaps opposite. Imagination is that which allows us to see appearance as appearance, attunes us to reality, even if reality is a wilder and wider margin than we could have accepted before — as, say, Sebald’s The Rings of Saturn brings us through the “traces of destruction” left in any given landscape to work us toward not only a greater proximity to our mythic selves, but seeks a transformative metaphor. I might say such work is what most typifies the poet’s novel. It uses literary trope not as a trick but as a condition, a schism opened in the world we know that allows us to glimpse the world that is. To stick with Sebald, we have the silkworm’s cocoon, that despite its history linked to time’s devastation, gives us hope — as does the long, dark, silken line that moves from margin to margin — of transformation.

Browne: Can you please talk about your novel, An Impenetrable Screen of Purest Sky, (forthcoming, from Coffee House Press)?  Where did the project begin for you?  Does the process differ for you from writing poetry or non-fiction?

Beachy-Quick: I’d long wanted to write a novel, starting a draft of one all the way back in graduate school, and after abandoning that, every few years would dip my hand into fiction again, always to the same end — not feeling ready to write such a thing. A few years ago I began writing fairy tales, this work springing out of reading George MacDonald, and feeling once again that I needed to learn something about how words behaved in this other form. I began to feel, I suppose, the way a symbol could contain within itself its own narrative urgency, and to trust not exactly to plot, but the inner fate of symbolic reality. In some sense, I began to feel like fiction, even to the extended level of the novel, could come into being by tracing those lines of how symbols interacted with each other — these gravitational points characters could not help but be in the tow of. 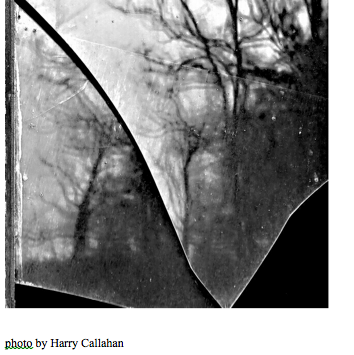 My novel began in consideration of Emerson’s sense that the nature of the world is compensatory. I began to wonder if it could be true, that every loss, even the most rueful, was met by some reciprocal force, something kind, gifted, and it is so even if we who suffered the loss can’t feel it. I wanted to write a novel where that world could be seen by a reader even if not grasped by the characters in the book—a kind of cosmogonic effort, offering a picture of a world more than a narrative about the lives that occur within it. Those lives occur, and I think a novelist must love those lives, must care for them; but the work in the end is not simply writing those lives, but giving some sense of how this particular world works, this one that may look like ours, but isn’t wholly ours, this imagined world. In this way the work feels very much like the work of writing a poem. Other aspects don’t: negotiating certain spaces a poem can easily ignore, simple things, such as how a character gets from one room to another, certain kinds of details, and so on. But in the end, it felt to me immersive, possessing, in the way poetry does; as well as the way writing an essay does.

I also began running, training for a marathon. I’d always thought I hated running, and so coming to love it felt like something of a sea-change. As miles increased — 10, 15, 20 — I’d eventually fill the time by letting myself think through the characters, let the next scene or connection unfold, and then would spend the afternoon that day, or when time next opened, writing down what had become clear to me. Something about running for hours coincided with the pages and pages a novel requires—my body and brain were working in distance.

Browne: I wonder if you might relate your earlier comment about “narrative drive” as “an accident of deeper investigation, one which can only be conducted by the novel being written” to your own writing process.  Does this apply to the book you are writing?  If so, how?

Beachy-Quick: The way in which my process in terms of writing poetry and my process in terms of writing fiction feel to overlap occurs — at least so it feels — with a similar kind of patience. In the way I might hear a first line of a poem and write it down and nothing else — just wait for days, sometimes weeks, sometimes months, reading the line over and over until I can feel the next line drop down from the first, so that it feels as if the poem is showing the way forward through itself, so it felt while writing the novel. Except more than an aural experience, it was often a visual one: seeing an image that as I lived with it, or let it live within me, I could begin to feel a momentum, a magnetism, that the image was itself in tow toward some other point, one the novel had yet to establish, but via the image could find. The plot felt an accident of this kind of patience, Leyden jar of the image, or some such magnetic catalyst.

Browne: Could you please tell a bit about the title in relation to the text.  Is it taken from Emerson?

Beachy-Quick: The title does come from Emerson, from “Experience,” which has for many years been my favorite of his essays. The sentence the title comes from occurs in a remarkable place in that essay—one which my novel feels deeply exploring. He writes the sentence after the incredibly moving admission of his son’s death, and his grief, so paradoxical, that he cannot grieve, and that what should touch him so dearly as to remove him from himself, has not, cannot, and despite himself, he feels still whole. It is a curious despair: to feel his lack of feeling. Part of what is moving in the essay is how he seeks a way to redeem his idealism from the crisis just mentioned, to return to that sense of form and truth he inherits from Plato, and the screen of sky pulled down on either side of us comes with the command not to look behind, and not to look ahead. It looks infinite on either side, but what we’re contained in is the “infinite,” which is a measure finite, just not one we know how to measure ourselves. 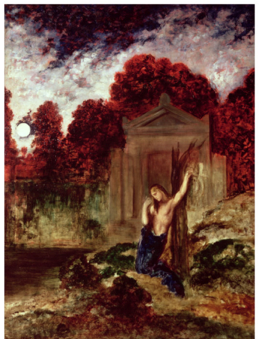 painting by Moreau is discussed in Beachy-Quick’s forthcoming novel, An Impenetrable Screen of Purest Sky

Beachy-Quick: The earthquake novel was for me Melville’s Moby-Dick. I’ve never recovered from the encounter. The other novel — well, novels — that hugely impacted my sense of what the form could be was Proust’s In Search of Lost Time. Those two works are really the bookends of my sense of novelistic possibility, but there are books in the shelf in between them of great importance to me. Sebald’s The Rings of Saturn. Borges. Hawthorne. Faulkner. Woolf. Berhnard. But the two which made me feel I must one day learn how to write a novel are Melville and Proust.