This commentary post features Robert Sullivan (Ngāpuhi and Kāi Tahu iwi). Robert is an important Aotearoa New Zealand poet/author, in that his work flows across several parameters. What do I mean by this?

Firstly, Robert is Māori — his iwi or tribal affiliations are as listed above and indeed encompass the entirety of New Zealand in that Ngāpuhi is northern and Kāi Tahu is southern in locality. Being Māori necessarily incorporates a different epistemological outlook and ontological stance — as conveyed in many of his poems. Quite simply, then, Robert sees and senses differently to a majority of New Zealand poets; yet at the same time he is more than capable of writing poems in a ‘mainstream’ English-language fashion, should he choose to. His is a particularly encompassing voice, controlled yet emotive — even angry, often wry — at times, and crisscrossing era and generation, and the boundary between the personal (see for example the excellent Honda waka from 1999) and the objective. He is rather like a weaver of fine quality, drawing from several patterns all at once. He kaituhi Māori, he kairaranga pūkenga.

His multifaceted poetry — itself stretching over several decades and nine collections — therefore includes references to an entirety of Māori motifs — historical, cultural, social, linguistic — and significantly encompasses ways of writing a poem that echo mōteatea or song-poetry, via their rhythmic structure, cadence, and oftimes repeated refrain or word echo. His poetry calls out for an oral reading; it is also replete with tangible imagery, whether it be prose-poetry (see Captain Cook, 2005) or the koan-like three-liners of his recent work. At times he reminds me strongly of Hone Tuwhare (as in Sullivan’s Listen to the rhythm of the falling rain, 1993), yet his is a distinctive waha or voice. It sings to the reader/listener, and it sings positively.

A new poem, entitled Whakapapa — as here — exemplifies the sui generis way Robert Sullivan constructs and at the same time inhabits a poem; whakapapa being one’s lineage or descent pattern.

These stones remind me of the whakapapa

of a kete, how each strand is scraped by shells,

pounded by stone till it softens

into something to be woven as Trixie Te Arama Menzies

has written of the harakeke — its lustrous

fibres made into baskets that swing

from the ears of gods.

A rope dangles from a trellis, its fraying fibres

capillary out into the air like a missing heartbeat

until the air brings it back

to movement and joins the singing birds here.

Is this whakapapa? the causal connections

of the earth? stones nestled in baskets of knowledge?

the tones and tremors? plants

poke out from the decking,

with tongues and hands.

Can we bring our whakapapa

or a tool? can we sift

the compass of signs

and say this is whakapapa,

that is whakapapa, descending

first, and ascending then

the winding aka to the open

Now, I stated that Sullivan’s work flows across several parameters. Another major component of his significance to New Zealand literature is his coediting of and contributing to three poetry and literary anthologies, which focus on Polynesian writers, and as such give opportunity to authors, who may well have not been heard previously. These are the compilations, edited with Albert Wendt and Reina Whaitiri —

Puna Wai Kōrero: An Anthology of Māori Poetry in English (2014). There is an excellent sampling of his own work in this compilation, by the way.

I asked Robert several questions pertaining to his own work. His responses are cogent, precise.

Thanks for the question, Vaughan. Being a kiwi comes with iconography, our national bird. Yes I am a kiwi, and a whole lot of other things bundled up with that. Ian Sharp’s identity list poem expresses that well, describing his narrator as a “… parcel of mixed groceries tied with a clumsy knot.” Identity as you know carries a lot of freight, it works on scales; the actual kiwi grubs around at ground-fern height while the symbolic one carries great national stuff like a rugby ball. I’ve never struggled with being a grassroots poet, while I’ve played little rugby. My PhD focused on identity from a Polynesian perspective, and looked at the history of the term Polynesian while closely reading five poets from the region, that is, outside of a national discourse, but inside a porous one with a problematic name, Polynesia. I liked that very much, looking at different poets within and without their various traditions and multiple perspectives from Te Moana Nui a Kiwa (the Pacific).

Kia ora Vaughan. I’ve very broadly written on nationalistic themes to do with Aotearoa, the workings of power and empire, whakapapa (genealogy), family, cultural achievements as a source of encouragement and a place to stand in a neocolonial Western context. If there is a fusion of approach between Māori/Polynesian poetic traditions and other traditions in my work, it is the foregrounding of emotion in places with long associations through ancestry [Rapatahana emphasis]. I move between lyrical and collective modes of perspective depending on how I feel at the time. I’ve mainly used English interspersed with te reo Māori terms and phrases as my Māori ancestors composed their poetry and lived their lives in both languages (before 1800 exclusively in te reo Māori). I haven’t been brave enough to compose solely in te reo Māori as my fluency waxes and wanes (right now the fluency is quite good). One te reo Māori poem I’ve written is a translation from Pushkin, translated with the assistance of Dr Rāpata Wiri. Most recently I’ve been rereading the poetry of my direct tūpuna (ancestor) in Ngā Mōteatea (edited by
A. T. Ngata et al, Polynesian Society) which was written in te reo Māori. (Here’s a link  to a good online dictionary). A large focus in my work is the transmission of knowledge through generations, so historical and mythical narratives are often threaded through the poetry.

Robert’s own succinct description of his variegated work, strikes me as a place to here include a further new poem by him.

or a small hill

off the white page

and the black text — it

I can see the urupā here

out the window as I write

by its story and gorsey skyline

the water moves and moves

this stone. I can see the cutting

quakes across the water

oriori to the marae.

What would you like to see more of in Aotearoa poetry from your point of view as a poet? In other words is there sufficient recognition, publishing scope, critical space given to poets who craft their work in ‘different’ ways?

I’d love to see new voices find publication from a wide range of styles and personal backgrounds so that we reflect our diverse community in terms of race, class, gender, sexuality, and beyond to be as inclusive as possible. Poets have never had greater access to media and to publishing than now, although our mainstream publishers no longer have deep pockets. It’s always a writer’s task to convince, or make curious, or satisfy, or entertain a readership, and it’s a lyric poet’s task to evoke the particulars of being and a sense of the flow state that created the feelings attached to being ‘somewhere’ at the time. A poem might be on the fridge next to a flat roster, or on the edge of a windswept cliff facing the ghosts of Kapiti Island. There are so many other kinds of poetry I wouldn’t know where to begin, except to encourage that too.

Yet another aspect of Sullivan’s writing is his versatility as a writer. He has also penned a graphic novel Maui: legends of the outcast, illustrated by Chris Slane, and a book for children, Weaving earth and sky, illustrated by Gavin Bishop. More, His poem ‘Kawe Reo / Voices Carry’ is inscribed on the front steps of the Auckland Central City Library. Robert Sullivan, then, is quite literally embedded in the bedrock of the Aotearoa New Zealand poetic. As here — 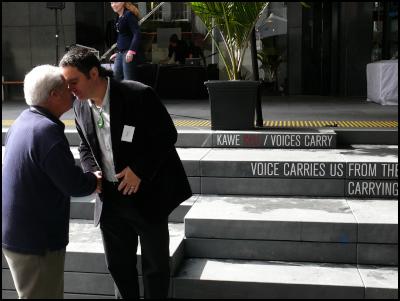 Finally, I asked him about what he is working on now?

A biography of the pioneering Māori tennis champion, Ruia Morrison, From Tikitere to Wimbledon, which is due to be launched at the national Māori tennis tournament near the end of this year.

Busy eh! There are a plethora of web-driven references to Robert Sullivan, a few of which I have adumbrated below, although some are in need of an update. These include him reading his poems.