Kac, Cayley, and Kargl on translation

If you are reading this text in a browser window, you are reading it in translation. Right click right here. View Page Source. This is the original text, composed in and of the internet’s native languages. Note the head/body page division, a convention carried over from print. The < head > is primarily preoccupied with the text's contextual issues. It tells the browser what its title is, offers the search engines clues as to its contents, provides a required reading list of other texts it refers to, and outlines instructions on what to do in the unfortunate event of IE. The < body > is more concerned with appearances. It tells the browser what the contents of the text are and how best to present them. Why HyperText Markup Language continues to textually embody the Cartesian mind-body split I do not know.

Walter Benjamin objected to the binary nature of traditional translation methods, advocating for transparency between an original and its translation. In his influential 1923 essay The Task of the Translator, he wrote: “It [the translation] does not cover the original, does not black its light, but allows the pure language, as though reinforced by its own medium, to shine upon the original all the more fully.” The creators of following three works take the task of translation beyond the binary by creating transparencies between the original language and its original medium through intermediation and the application of what I am calling triple language systems, in reference to the translator of all translators, the Rosetta Stone.

Translation is an ambient time-based work of digital poetry by John Cayley with generative music by Giles Perring (first published in 2004, pictured below). A black screen is gradually replaced by fragments of images of paper pages containing passages from Walter Benjamin’s essay, On Language as Such and on the Language of Man. These passages undergo an iterative algorithmic translation process, moving between computational, visual and textual realms, blurring boundaries between English, French, and German. The translation process is never finished, never fixed. There are currently four separate versions of Translation. Full descriptions and download instructions for each are available on John Cayley’s website. 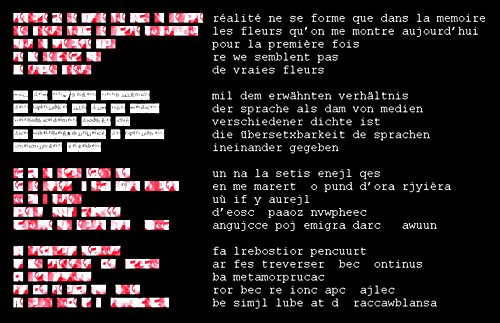 Genesis is an interactive installation by Brazilian biotech poet Eduardo Kac (first exhibited at Ars Electronica in 1999). A sentence from an English translation of the biblical book of Genesis is translated into Morse code and then converted into genetic code. Much of what has been written about this well-known work has focused on the fascinating process by which a synthetic "artist's gene", written by the chemical base pairs that make up the DNA molecule mutates under viewer-activated ultraviolet light thereby creating a new translation of the biblical text. Less attention has been paid to the choice of Morse as an encoding language in this piece. The switch controlling the ultraviolet lights in Kac’s installation echoes the on-off states of telegraph transmission. Morse code has a similar binary logic to digital 0s and 1s, but Morse can be read by humans without a decoding device. Telegraph operators translated audible clicks into hand-written dots and dashes. Wireless operators translated the dit-dah sounds of short and long pulses directly into their phonemic, alphabetic equivalencies at speeds so great as to preclude them from being able to read as they wrote. In performing this act of translation their bodies became hybrid creatures, part medium, part scribe; human interfaces, closing the circuit between transmission and reception, signal and static, ear and hand, transcription and meaning.