How the weird enters the world, part one

There is a large shelf in the poetry section of Powell’s Used Book Warehouse in Portland, Oregon that is weighed down exclusively by versions of Edward FitzGerald’s illustrious and legendarily loose translation of The Rubáiyát of Omar Khayyám. It is perhaps the destiny of only the greatest poems to become furniture, decorative shelf-filler, markers of conformity masquerading as taste. Ultimately, unread. Just as easily do these all-too-willingly adopted artifacts start to become emblems of an embarrassing past, haunting “used” stores with their overabundance like copies of Herb Alpert’s Whipped Cream and Other Delights.

What Willis Barnstone has called the “bright arrogance” of FitzGerald’s translation has been the source of profound misgivings about the poem, and by association experimental translation as somehow fundamentally a form of aggressive cooptation. FitzGerald’s quip that “It is an amusement to me to take what liberties I like with these Persians” does not help. Yet, for example, W. G. Sebald — whose work is an extended melancholic meditation on the ways in which the deep histories of colonial atrocities impact the very moment of writing itself — does not disapprove of FitzGerald's symptomatic unconcern.  In fact, Sebald speaks lovingly of both the poem and the poet and, following the lead of Borges, describes the Rubáiyát not merely as great literature, but as something akin to the miraculous: “The only task FitzGerald finished and published in his lifetime was his marvellous rendering of the Rubáiyát of the Persian poet Omar Khayyam, with whom he felt a curiously close affinity across a distance of eight centuries … The English verses he devised for the purpose, which radiate with a pure, seemingly unselfconscious beauty, feign an anonymity that disdains even the least claim to authorship, and draw us, word by word, to an invisible point where the mediaeval orient and the fading occident can come togetherin a way never allowed them by the calamitous course of history.”

Part of Sebald's interest might lie in this notion of “feigned anonymity” — because while FitzGerald (or Sebald through FitzGerald) cannot throw off his implication in an intolerable system, he can conceive of strategies of non-participation that can both absent his presence, and present his absence—a technique which, as Sebald implies, potentially creates a space for a utopian écriture. Modest and self-effacing, FitzGerald published the Rubáiyát anonymously, and it was only discovered after its price had been reduced to a penny in an overstock bin.  Wikipedia calls him “one of the most unobtrusive authors who ever lived,” another commentator “the least productive of the great Victorians,” that is, the least likely to use the Asiatic “infidel Epicureanism” of Omar as a convenient foil for English vigor. For Borges, he was “indolent, solitary, maniacal” and this mania might have been the friendly demon that caused him to create this “pretty Eclogue … tesselated out of a … scatter of Quatrains” and even to impose the same mash-up techniques on paintings he owned and the work of other poets. But his aim, if aim we wish to call it, was to translate against Victorian propriety. His exuberant, irreverent translation went against the tendency of more academic Orientalists to desiccate their source material with presumed accuracy (often obscuring explicit bowdlerization), “elud[ing],” as FitzGerald claimed, “all that was dangerous.”[1]

Peter Lamborn Wilson, precisely in relation to Islamic source texts, points to the value of this type of approach, with translation providing a conversation from one culture’s heretical margins to another. “Romantic perception often deliberately distorts, but does so in the interests of freeing the very means of perception from the oppression of consensus and the deadly humdrum of mere accuracy.” For experimental translators of this type of material, or at least for those readers who might wish to rescue FitzGerald from the eternal return of the overstock bin, one might have to embrace Lamborn Wilson’s model of heretical translation rather than be unduly swayed by the influence Edward Said’s Orientalism, a too pious reading of which may foreclose this type of work. For Lamborn Wilson, these types of misreadings and distortions create a means of cultural transfer, not in the realpolitical networks of global power, but through a more fleeting medium of subterranean affinities, in a nomadic anarchosphere of mystics, visionaries and poets.[2]

But it’s not merely some deadhead fringe speaking here. Recent, more traditional, scholars have attempted to rectify the image of FitzGerald and his practice, and Victorianists Erik Gray, Annmarie Drury and others have emphasized that much of the blame for the reputation of Rubáiyát is to be laid on Omar Khayyam clubs that took advantage of the book to espouse jingoistic ideals. FitzGerald would have disdained this type of popularity, and in fact was bemused by any type of popularity. Gray goes as far to imply that both the content of FitzGerald’s famous poem, and the facts of his eccentric, drop-out life in Suffolk, should lead us to believe that he was, in a sense, performing oblivion rather than seeking confirmation of British superiority or literary apotheosis. If Said is concerned with the intellectual “management” of the orient by Western authorities, the work of FitzGerald seems quite mismanaged — aleatoric and magical, rather than authoritarian or even authorized. In fact, FitzGerald would continue to futz with his own work to such an extent that we could even say that, like bpNichol, he was more invested in a translational process rather than finished product, keeping in play what Paolo Bartoloni calls a “potential zone” of translation “undamaged by the purposefulness of finality,” expressing “the pure pleasure of in-betweeness, where [translation’s] potentiality of not-being is celebrated.” The virtual output of Fitzgerald included not only four different versions (he would receive more criticism during his lifetime for mangling his own translation rather than in any way misrepresenting the source text), but also the countless bespangled, gilt, illustrated and admittedly sometimes tacky copies of an eight hundred year old, barely known poem, once itself on the verge of oblivion, now again fading into irrelevance somewhere in Oregon.[3]

“The Moving Finger writes; and, having writ, Moves on.” Aptly, then, in #!, Nick Monfort uses the Ruby programming language, and perhaps J. R. Tutin’s 1900 Rubáiyát Concordance, to create six new quatrains in his poem “Ruby Yacht.” Referring perhaps to FitzGerald’s yacht “The Scandal,” as well as a bad joke from a Bullwinkle cartoon (and, of course, engaging in the common misperception that the rubai of Rubáiyát refers to some lapidary essence rather than merely the number “four”), Montfort’s “Ruby Yacht” is a ship which has definitively slipped the bounds of its exotic and exoticized past, but is of a piece with the recombinatory oddities of new digital heresies. 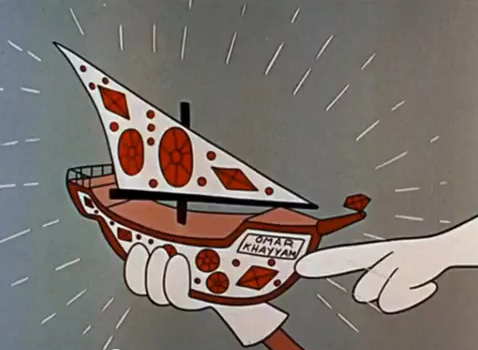 1. While the Rubáiyát has become a symbol for some of the worst excesses of nineteenth-century colonial attitudes, FitzGerald’s slacker unconcern would qualify him as symptomatic — the symptoms of which we should and must read across even the most “innocent” of texts — but not as undeserving of attention … Or if we don't attend to him, it may be part of this text’s unique play with the forces of oblivion.

2. As Lamborn Wilson shows in his book Sacred Drift, and as we will see in a future post, this distinction between creative inauthenticity at the heretical margins of culture and real politics is perhaps a dubious one. Lamborn Wilson uses the example of Noble Drew Ali’s appropriation of Islamic symbology to create a space for African-American cultural reinvention and empowerment. Similarly, in relation to the translational work of Haroldo de Campos, Else Ribeiro Pires Vieira describes his reevaluation of the postcolonial circulation of cultural texts as “moving away from essentialist confrontations towards a bilateral appropriation of sources.” Even Edward Said asserts that the point of these questions of representation is to find the nexus or literary dispositif that yokes the literary work to historical and social circumstances, “not the correctness of the representation nor its fidelity to some great original.”